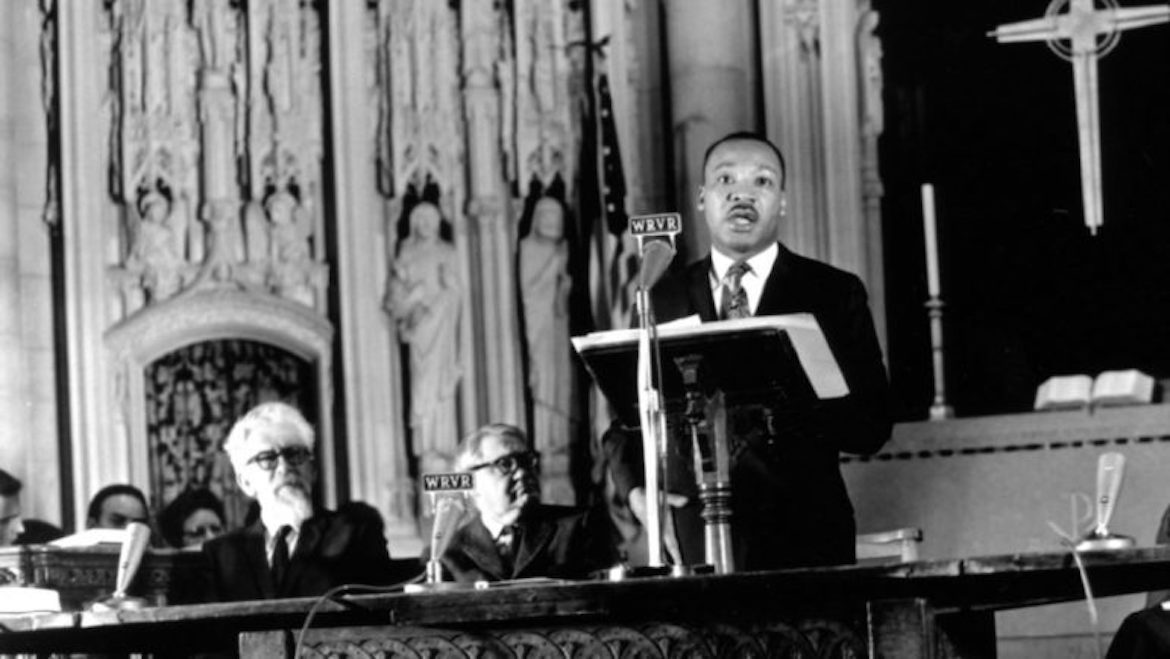 The Rev. Martin Luther King Jr. delivers his speech "Beyond Vietnam" at the Riverside Church in 1967. The speech aired on the church's radio station, WRVR.

The American Archive of Public Broadcasting and the Riverside Church in New York City have received a $330,000 grant to digitize and preserve recordings of programs that aired on WRVR, a noncommercial station operated by the church from 1961–76.

Titled “Public Radio as a Tool for Cultural Engagement in New York in the 60s and early 70s: Digitizing the Broadcasts of WRVR-FM Public Radio,” the project will preserve more than 3,500 recordings representing 4,000 hours of programming, according to a WGBH release. The grant was awarded by the Council on Library and Information Resources.

Founded by John Rockefeller in 1930, the Riverside Church is an interdenominational church with a history of influencing the nation’s “religious and political landscapes,” according to its website. The church “has always been kind of on the side of taking difficult questions, difficult conversations and making them available to the public,” said Dustin Pickett, Riverside’s associate minister of stewardship and development.

WRVR gave Riverside Church a platform to broadcast sermons and weekly services and to hold discussions about critical social events of the era, according to Pickett. Its programs covered topics including Black power, the antiwar movement and women’s, civil and LGBTQ rights. Listeners also heard sermons by the Rev. Martin Luther King Jr. and interviews with Malcolm X.

“[WRVR] gave an opportunity to kind of engage the community on a wider scale and also to continue engaging this membership base throughout the week,” Pickett said.

The station won a Peabody Award in 1964 for its coverage of the civil rights movement in Birmingham, Ala., when it sent a reporting team to the scene to collect firsthand accounts. WRVR was sold to the commercial Sonderling Broadcasting Corp. in 1975.

The motivation and initiative behind the project was twofold. AAPB realized they had already digitized about 120 pieces of WRVR content through a 2012 project in which they digitized the University of Maryland’s National Association of Educational Broadcasters collection. They got in touch with Riverside to work on digitizing their entire collection, said Casey Kaufman, associate director of WGBH’s media library and archives.

At first, timing “wasn’t quite right,” Pickett said, but when he arrived at Riverside in 2016 he decided it was time to pursue the digitization project. Discussions began last year about how to convert Riverside’s large in-house archive into a digital format for public distribution.

Once the project gets underway in July, preservation will take approximately 18 months to complete, Kaufman said. After the materials are digitized, they will be available to the public through the Library of Congress and AAPB’s website.

Though the programming is decades old, it remains relevant to movements in the U.S. today fighting for equality, Pickett said.