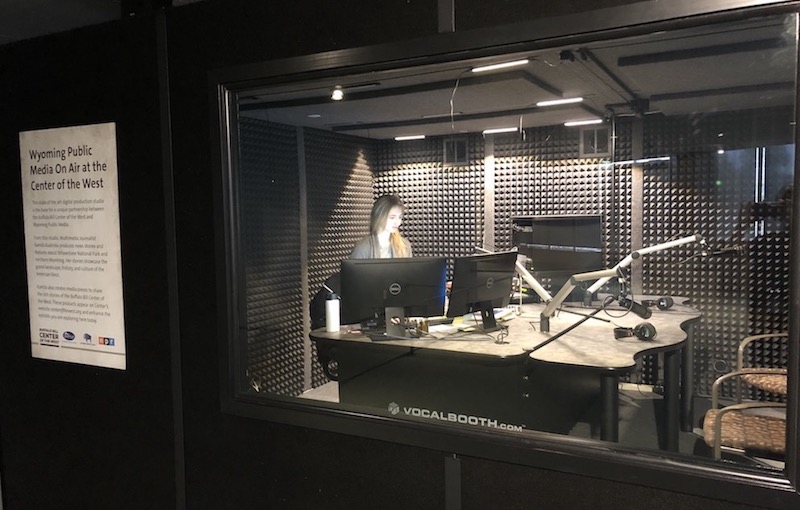 Kudelska working inside her sound booth, which she calls “the fishbowl.”

Stroll into the Buffalo Bill Center of the West in Cody, Wyo., and the first exhibit you’ll see just inside the door is Wyoming Public Media reporter Kamila Kudelska at work.

Go ahead, wave. She’ll wave back.

The multimedia journalist’s glass-encased studio, which she has dubbed “the fishbowl,” is where she produces coverage from the remote northwest corner of the state and connects with WPM’s main studios 400 miles away in Laramie.

Kudelska’s job is part of a new journalism and production collaboration between the center and the statewide network. Soon she’ll also be producing multimedia content for use in the center and on its website. And she hopes to create a behind-the-scenes podcast for the center, which houses five museums and a research library highlighting the history of the American West.

By placing her within the fishbowl, Kudelska said, the center aimed to make “more people aware of the material that I produce for the museum as well as for WPR. The idea is also that when I conduct interviews in the booth, speakers on the outside will play the interview live so people can watch and hear in real time.” The soundbooth was made specifically for her.

Kudelska has covered a range of topics for the station since arriving in November: management of grizzly bear populations, a debate over teachers carrying guns in classrooms, a project that could allow oil and gas drilling on federal and state wilderness lands.

“I decided, as a longtime New Yorker and a journalist, that I wanted to go where there needed to be more coverage.” — Kamila Kudelska, Wyoming Public Media

The idea is to bring Wyoming perspectives on Western issues to a larger stage. Center Trustee Naoma Tate and WPM GM Christina Kuzmych met at a public radio function two years ago and realized both their organizations are working toward that same goal.

“Quite often, the West’s perspective isn’t necessarily heard nationally,” Tate said in the announcement of the project. “This partnership gives us a voice and a way to share our unique stories, perspective and culture throughout Wyoming and beyond.”

That’s Kudelska’s goal as well. She’s originally from New York City. She has a journalism degree from Columbia and interned for WNYC’s The Brian Lehrer Show. However, “one of the problems with journalism today is not enough reporters are working in the so-called ‘flyover states,’” she said. “I decided, as a longtime New Yorker and a journalist, that I wanted to go where there needed to be more coverage.”

She said that the change in culture — from bustling downtown Manhattan to just outside of Yellowstone National Park — is an exciting challenge. “I’ve been exposed to so many different ideas and values I hadn’t experienced before, which makes me think differently,” Kudelska said.

The center’s location is also a plus for the network. “Having a reporter based in Wyoming’s northwest quadrant is critical for us,” said WPM News Director Bob Beck. “In the past, there were many stories we simply couldn’t cover because of the time and resources required to get a person from Laramie to the Cody area.”

Working within the center also provides “an amazing resource,” Kudelska said. “I’ve been covering a lot of wildlife stories. There’s a natural history museum curator’s office about a 2-minute walk from mine. I can just walk over and ask an expert about grizzly bears.”

A two-year grant from the local Hal R. and Naoma J. Tate Foundation funds the work. “My hope is the collaboration succeeds and we can extend that,” Kudelska said. “I’d love to stay longer.”

Meanwhile, the winter months are quiet at the museum, “so it’s good I’m being slowly introduced to the fishbowl aspect of the job,” Kudelska said.

“And I do have an office I can escape to if I need to,” she added.