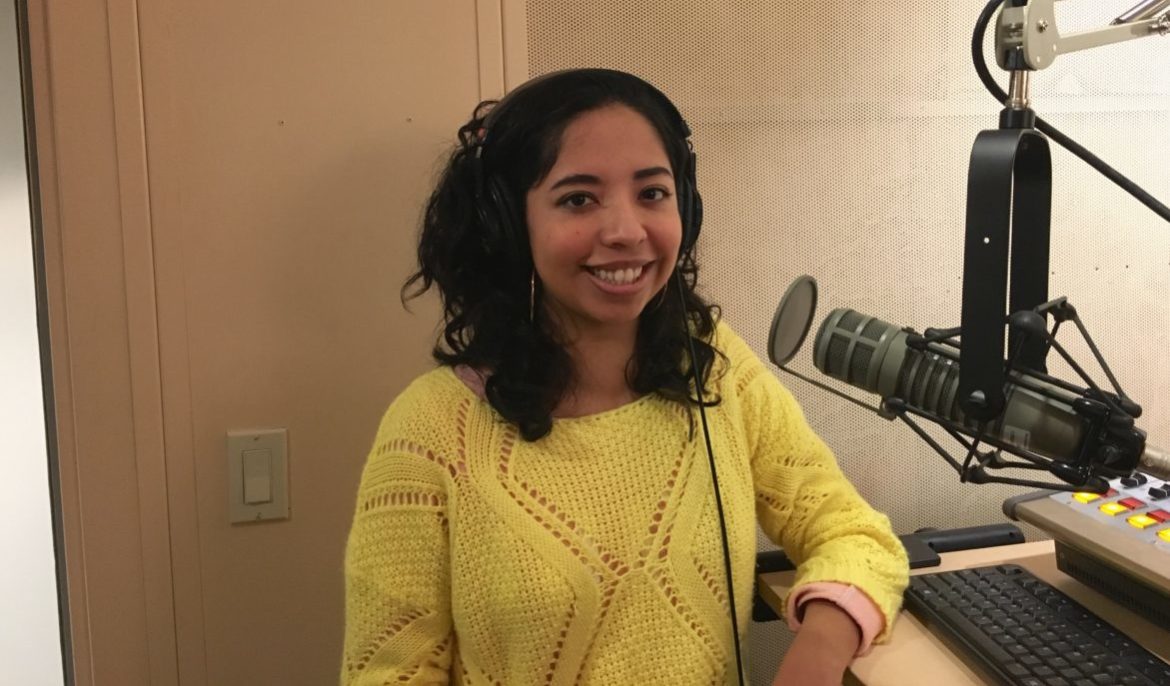 Public radio reporter Esmy Jimenez is used to running up against deadlines. But as Congress debates what to do about Deferred Action for Childhood Arrivals, her uncertain future troubles her.

In a year, Jimenez may lose her driver’s license. She may lose her ability to work. She may be deported. “I’m not only doing my job, I’m also carrying that whisper in my ear,” Jimenez said.

Jimenez, 24, has a work permit under DACA, the President Obama–era policy that allows certain people who come to the U.S. from other countries as minors to work legally. The Trump administration announced an end to the program last September, giving Congress until March 5 to act.

Congress is debating DACA’s future this week as government funding is set to expire. If the program ends, Jimenez will have to return to Mexico, a country she left at the age of two months in her mother’s care. Her DACA work permit expires in February 2019.

Current was unable to determine how many others in public media are personally affected by DACA. CPB does not track the immigration status of people in public broadcasting, a spokesperson said. Jimenez is one of roughly 800,000 to have received work permits through the program.

Jimenez said she’s anxious and wants people to understand what it’s like when journalists like her become subjects in news events.

“It feels like there’s this weird clock no one else can hear, but it’s timing out,” Jimenez said.

‘I was going to do it anyway’

Fleeing domestic violence in central Mexico, Jimenez’s mother brought her to the Yakima Valley in central Washington, where Jimenez grew up among vineyards and orchards. Her mother stayed home with her and occasionally worked in the local fields picking blueberries and cherries. Her stepfather works as a farm hand in irrigation.

Jimenez learned about her family’s immigration status at four years old. “We don’t tell people,” she said her mother told her. “It doesn’t mean you did anything wrong. It just means that there are things you don’t do later on.”

Jimenez’s status didn’t become a barrier until she reached her teenage years, when she was a fixture in AP and honors classes and planning her future. An academic counselor encouraged Jimenez to apply to the Ivy Leagues. Then Jimenez disclosed her status. “Her face visibly dropped,” Jimenez said. The counselor advised Jimenez to take time off, save money and consider community colleges.

“She immediately can connect on a level that other people could not.” — Scott Leadingham, Northwest Public Broadcasting

Jimenez was crushed but motivated. She ended up graduating from the University of Southern California in Los Angeles, where she studied international relations and environmental science.

“I was pretty good at researching things because I had to be,” Jimenez said. “It’s part of my safety and my family’s well-being to know whether something is going to impact us.”

Jimenez also has a defiant spirit and likes to prove people wrong. Her parents told her she couldn’t get a driver’s license, but she knew the laws were lax. “I enlisted myself in drivers’ ed,” Jimenez said. “My parents weren’t happy, but they were supportive. They knew I was going to do it anyway with or without their help.” She gained the freedom shared by her peers and the ability to drive her mother to appointments.

Jimenez was a sophomore in college when President Obama signed DACA into law. Her parents called it a trap. Jimenez wanted to work legally. She saved up money for the application. “If this is a trap, I have to try,” Jimenez said. The application asked Jimenez to list every prior address and school. She thought doing so could harm her family but wanted to trust the government.

Jimenez said her dad warned her that “if this comes down and hurts the entire family, I want you to know that it’s because you wanted this for yourself.”

But when she received DACA, her parents celebrated. They shared the good news with neighbors and coworkers. Local kids asked Jimenez for help with their applications. “It was such a bright light,” Jimenez said. She’s since renewed hers twice.

But she’s felt dread since President Trump took office. She was heartbroken when Attorney General Jeff Sessions announced in September an end to the program. “There was almost a relief when the knife came down,” Jimenez said. “I was like, OK, there it is. I can deal with the action. I can’t deal with the anxiety and tension of when it’s going to happen.”

Jimenez started a one-year bilingual reporting position with Northwest Public Broadcasting in December after seven months reporting part-time for the station. During the interview, she was upfront about her status, said news editor Scott Leadingham. “She didn’t have any qualms; she didn’t try to hide anything,” Leadingham said. “I said, great. I don’t care. I hope both personally and professionally this is an asset in the sense that it informs not only your coverage, but our organization’s perspective on how to cover these issues with all the nuance that it requires.”

Leadingham pointed to Jimenez’s coverage of a Yakima Valley landslide that displaced Latino farmworkers as an instance in which Jimenez brought a depth and perspective that otherwise would have been lacking. “She immediately can connect on a level that other people could not,” Leadingham said.

Yet Jimenez says she sometimes struggles with talking to locals. After studying in Los Angeles, she has returned to the community where she grew up as a college graduate, and has a broader vocabulary to describe the injustices she experienced growing up. She said she sometimes feels she is “reverse code-switching.”

“Growing up in a small town, maybe I didn’t have the language for certain -isms, and even though now I do, my family and community sometimes don’t,” Jimenez said. “So I have to find a way to not let my education get in the way of connecting to my own people.”

As a public radio reporter, Jimenez said she feels a duty to reflect the community where she grew up. She is wary of outsiders who parachute in and intimately knows immigration issues. Though she agrees that she is a bridge between racial and ethnic groups and people with different experiences, she also finds the role problematic.

“I think that’s a really lovely metaphor, but this year, especially, I remember to be a bridge is to mean that you are being stepped on,” Jimenez said. “As strong as you are, as powerful as it is to connect, you are being walked on. That’s something that I’m struggling with. I wonder how long I can do that for and if it’s enough.”

“As strong as you are, as powerful as it is to connect, you are being walked on.” — Esmy Jimenez

She felt some of that emotional weight in December when she interviewed Jose Luis Mendoza, a 56-year-old laborer who had started picking strawberries when he was 16 years old. Mendoza had lost part of his leg in a workplace accident and made a claim for state compensation. He talked about the difficulty of being a Latino man who couldn’t work in agriculture anymore. With a middle-school education, he had no other employable skills. He felt humiliated, Jimenez said.

Jimenez is trying to stay positive even as her own future is precarious. She keeps in mind that nobody can take away her education and writing talents should she have to return to Mexico. “I can try to freelance, do contract work,” she said. “And that’s been giving me hope.”

She says co-workers have been supportive, though she feels like she’s wearing an X mark. “I know that everyone can see it,” Jimenez said, “and I can, too.”