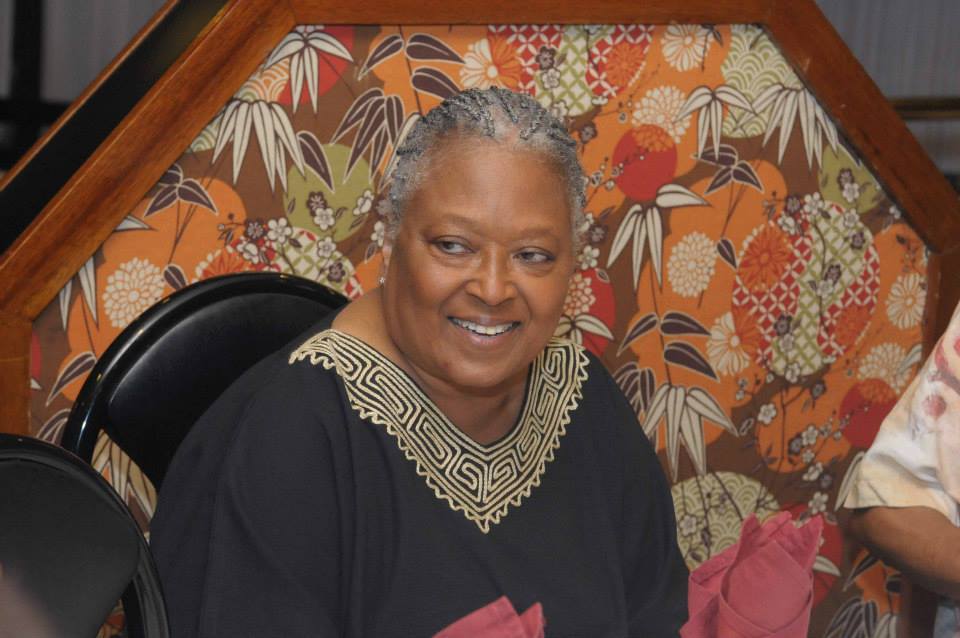 Swanston-NuevaEspana in July 2014 at a Journal-isms Roundtable in Washington, D.C.

This article was originally posted on the website Richard Prince’s Journal-isms and is republished here with permission of the author.

Walterene Swanston-NuevaEspana, a decades-long champion of diversity in the news media as a former print and broadcast journalist and journalism association executive, died Friday at a Fairfax County, Va., hospital in the Washington, D.C., suburbs. She was 74 and suffered a massive heart attack a week ago, said friend and fellow journalist Wanda Lloyd.

“Walt was one of the sweetest, most gentle souls, and someone who was dedicated to the success of every organization for which she worked, every project she led and every young journalist who needed her help,” messaged Lloyd.

“Diversity was something she did, it was what she was, a way of life.” — NPR host Michel Martin

In addition, she worked for the Radio and Television News Directors Foundation,  directing the organization’s diversity, educational and international programs; for the Newspaper Association of America Foundation, where she directed diversity programs; and for Knight-Ridder Inc., where she was a consultant.

NPR host Michel Martin remembers Swanston’s time at that network. “From the minute I set foot in the door at NPR, Walt was a source of friendship and wise counsel,” Martin said by email. “And I don’t think I’ve ever met a person with a more diverse network of friends, colleagues, and mentees. Diversity was something she did, it was what she was, a way of life. She was a walking, talking example of how it can and should be done.”

Keith Woods, who succeeded her as diversity executive at NPR, said by email Saturday, “Walt was one of the most resilient, persistent, and, above all, empathetic people I’ve known. She believed deeply in the work of diversity, and so many of us who have done this work found themselves at one time or another following in her path. Walt was a true champion, and journalism is particularly poorer with her passing.

“I knew Walt for more than 20 years. She had a rough time at NPR and struggled to make progress in the newsroom. Still, she strongly encouraged me to follow in her footsteps and offered herself as a coach because, above all, the work she did was out of love and passion. No organization or obstacle ever beat her. I’m heartbroken to have lost her.”

NuevaEspana was known mostly to fellow journalists as Walt Swanston before she remarried in 2015, after the 2006 death of her first husband, public relations executive David Swanston.

She was hospitalized Jan. 12 and died in the early hours Friday, according to her daughter, Rachel Swanston Breegle.

The former Walterene Jackson was born in Clinton, La., and attended segregated schools there before she, her sister Bettye Jackson and brothers Raphael “Ray” Jackson and Ruffin Lane “Buzz” Jackson were put on trains for Oakland, Calif., where they lived with an aunt and uncle so they could attend integrated schools.

When presented with the Ida B. Wells Award from NABJ in 2011, she thanked her parents for enabling her and her siblings to leave Louisiana. “None of the children ever went home to live there again,” she told the NABJ audience. Still, she regretted that the move broke up her family,

“She believed deeply in the work of diversity, and so many of us who have done this work found themselves at one time or another following in her path.” — Keith Woods, NPR

At her alma mater, San Francisco State University, she met David Swanston, and as a young journalist she worked at the San Francisco Examiner and the old Washington Star. Later she was a copy editor and contributor to the Washington Post’s Style, weeklies and real estate sections; a reporter and producer at Washington public television station WETA; and executive editor at WUSA-TV, the Gannett-owned CBS affiliate.

But it was as a diversity champion that she was best known. For more than 25 years, she worked with newspapers and television and radio stations to recruit, promote, train and retain people of color and women.

In accepting the Wells Award in 2011, she said, “I have left behind a number of people in news operations around the country whose voices have been heard for the first time.”

She was a member of the strategy committee for Journal-isms Inc., the nonprofit organization created to nurture Journal-isms, and successfully nominated this columnist for the Wells Award two years after she had won it herself.

Since 1999, she had been one of four organizers of the Journal-isms Roundtable, a monthly gathering of Washington journalists who discuss issues of race and journalism. The others are Paul Delaney, Betty Anne Williams and this columnist.

Swanston-NuevaEspana lived in Fairfax County and in addition to her daughter is survived by a son, Matthew Swanston; four grandchildren; and her sister, Bettye Snowden, of California. Her husband, Ray NuevaEspana, died in 2016.

The family is asking for privacy over the next few days. A memorial service will be planned in a few weeks to give friends and family time to make travel arrangements, Breegle said.

Richard Prince is a veteran journalist who writes “Richard Prince’s Journal-isms,” the news column on diversity issues in the news media.