When should a journalist take to the mic to tell a deeply personal story? Sally Herships found herself working through that question as she dealt with her husband’s sudden, unexpected decision to leave their marriage. The Marketplace contributor and independent producer emerged from the experience with “As Many Leaves,” a story that aired on the BBC last year. At the Third Coast International Audio Festival earlier this month, Herships sat down with Annie Russell, guest host of our podcast The Pub, to discuss “As Many Leaves,” including how she got started creating it. This transcript has been edited for clarity.

Sally Herships: I started keeping an audio diary … just as a very familiar way for me to cope with something bad that was happening. I honestly don’t remember how I started; I don’t know if a friend said, “Hey, you should keep a diary.” Like I say in the presentation, I had no intention of creating a story. I think I was just trying to cope, trying to get through a bad time, and so turned to something familiar to me and comforting to me, which was my microphone and recorder, and started keeping an audio diary.

Annie Russell, Current: How do you then at that point say, “I think there’s something here,” and more than this is a diary, there’s a story here?

Herships: I think the answer is, I didn’t know. I really wasn’t sure, and there are a lot of different aspects to that, so I wasn’t sure if there was a story, and I also wasn’t sure that even it did turn out that there is something worthwhile to be made out of it, I wasn’t sure that I would want to share anything. So I went back through all my tape — I had like eight or nine hours of tape, which is a lot, or feels like a lot — and that took a really long time. I don’t remember how long because this is now years ago. And I went through it, and as an experiment what I did was I made a short montage, a non-narrative montage. I run a live storytelling night, so I played it at the storytelling night just to see what it would feel like. Because I’m a journalist, I’m a reporter, I don’t normally tell personal stories, especially not stories about myself where I am a character in the story. 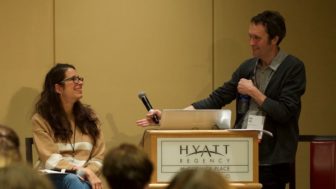 Sally Herships and Alan Hall, an editor of “As Many Leaves,” spoke at Third Coast in Chicago Nov. 9–11.

Current: And how did that storytelling night go, and what did you take away from that experience?

Herships: There were feelings — I was feeling feelings — but I decided that people seemed to react OK to it. It’s sort of like after you give a talk for the first time, people come up and they talk to you afterwards and you see their mouths moving and you hear sounds, but you don’t really process what people are saying. But it seemed like it was OK.

Honestly, I didn’t really get any further than that because I happened to be chatting … with Alan Hall, who is the founder of Falling Tree, and I think I said, “Hey, I have I have this tape.” Then, a few weeks later, I got an email from one of his producers who was like, “Hey, do you have that tape that you and Alan were talking about?” So I sent them the piece I had already mixed, and a short version ended up airing on Short Cuts, which is the series they produced for the BBC.

And everyone knows how it is, like every time you create a short story, you’re always like, “Ah, man, I have this tape that ended up on the cutting-room floor. Ah, so difficult, my poor little” — what do you call it? Killing our darlings. “There are my darlings, all over the floor.” I felt like I had more tape that I wanted to use, and then I went through another period of like, “Oh, gosh, it was so satisfying to get to tell the story, but I still had more tape I didn’t get to use.” And that was really where my focus was. So I was talking to my friend Lu Olkowski, I was like, “I don’t know what to do!” It was so satisfying to tell the short version that I wanted to do a longer version, but I didn’t know how to do it. Lu was the one who was like, “Hey, dummy, why don’t you go back to the great people at Falling Tree? They produce half-hour documentaries for the BBC.” Then the light bulb went off, and then I decided to talk to the folks at Falling Tree and see if they would be open to a pitch. I don’t know, they have to pitch the BBC. It’s a whole process of its own.

Current: You are a journalist, and so you know what it is to hear good tape when you’re interviewing someone. How do you have enough distance to figure out what is good tape that you yourself have recorded in a diary format like this?

Herships: You don’t, and that’s why you need an editor. … The only thing that’s different is when Alan, the editor, was like, “Hey, we need this extra tape,” or “We need to provide context for the listeners” — which is a totally normal thing — “about what was positive about your relationship with your ex-husband, which is really in part what the story is about, the aftermath of his leaving.” And that wasn’t something I was super-psyched about. I was kind of like, OK, but … what bothers me is when people treat me with kid gloves, and I’m like, “C’mon, man, we’re both professionals here. It’s a script. I get it. Tell me what’s boring, tell me what’s confusing, give me the edits, I want the edits.”

Current: You talk about this process being yours, and you’re at Third Coast this year. Obviously you’re getting a lot of questions about this piece and this time in your life that is now far away. Do you get sick of talking about this?

Herships: Maybe a little bit, just a tiny bit, just a tiny bit, in an emotional context. I’m so psyched when people want to talk about the story from a storytelling aspect. “Yeah, that’s great, I’d love feedback on that.” But when people approach me and are like, “Hey, I’m really sorry about what happened,” I’m like, “That’s OK, I’m fine, it was so many years ago.” So maybe a tiny bit, but that’s to be expected. So I don’t think it would be really cool if I was fussy about that, because I put that story out there into the world, and that’s one of the repercussions of doing that.

Current: You teach. What do you tell your students who are thinking about working on a story like this?

Herships: They don’t tend to ask, and I think one student did. She had a big experience in her life, a big personal thing happened. I think I told her two things. One, I think when people hear the story, they don’t realize I did not plan to make this. This was something that was almost an accident. It was just like, at the end of the year I was like, “Oh, hey, I’m sitting on this tape.” Sort of like if you’re a baker and you realize like you have all these delicious chocolate chips, like maybe you’ll make some cookies. It’s hard for me as a radio producer to be like, “Wow, I have that mountain of material. I should make something.” … What I did was I was using this as glue to hold myself together and made a diary and then selectively decided which parts to share while telling a true and powerful story.

“I think when people hear the story, they don’t realize I did not plan to make this.”

And then I said also, “There’s no rush.” When something bad happens, what’s that advice? Don’t shave your head; don’t get a piercing; don’t get a tattoo; don’t get married. Maybe also don’t make a story; maybe wait a year or two or five.

Current: Why the BBC, and why a British audience specifically?

Herships: The BBC is in England, and that’s really far away; there’s an ocean between us. And they speak English, and they do beautiful work. So it’s a combination of being far away in another country — such a safe, safe, faraway place — and also doing the most beautiful work that I have always dreamed of getting the chance to work on. So those are the two reasons that I hoped to pitch them — because just because you want to tell a story doesn’t mean someone’s going to take your pitch.

Current: It sounds like you approached the story similarly to the way you would approach editing and gathering tape for any other story that you work on. Has it changed at all the way you think about telling other people’s stories?

Herships: I think it’s changed the way I would like to tell stories. I don’t always have the luxury of working with a composer, with an editor who has all this time. I don’t always have the luxury of taking a year to produce something. But I remember when Alan first told me — and Ellie McDowall, who was the first producer on the piece — “Hey, what about other voices? What about other textures?” I was like, “Oh, other textures.”

And now I just want to work with composers all the time; we don’t get to do that in news. But I’m going to start work on another documentary piece. Not a factual, reported, proper reported piece, but, like, “Oh, I hope we get to use a composer because that is just, like, the best.”