TJ Lubinsky, the prolific producer of oldies-music extravaganzas that have anchored public TV pledge drives for the past 20 years, will offer stations a new twist on the format for March.

With The Next Doo Wop Star, a two-hour show that incorporates a talent search and echoes of a singing competition, he targets the younger viewers that PBS covets, along with older doo-wop fans who went nuts over his earlier programs reuniting oldies groups. 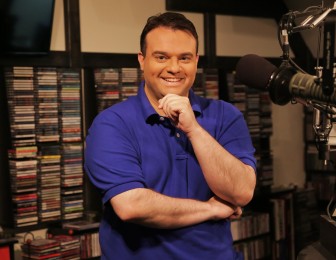 His company, TJL Productions, is currently accepting video auditions for The Next Doo Wop Star, a riff on NBC’s The Voice that also takes a trip down memory lane.

Lubinsky, 45, acknowledges it’s a gamble. He’s shouldering most of the cost, with PBS ponying up 10 percent of the budget, he said. But he’s convinced the music is irresistible.

Doo Wop 50, which aired in 1999, is still the number-one music fundraising show in the history of PBS, Lubinsky said, bringing in more than $75 million. His 100-plus specials — celebrating everything from R&B music to rock, big band jazz, Broadway musicals, disco and surf music from the 1950s, ’60s and ’70s — have by his count grossed more than $1 billion for public TV stations. Yet he has a special attachment to doo-wop.

Lubinsky, whose grandfather founded Savoy Records in 1942, has a family history in the music business, and a mission. “It is part of my calling to make sure this music is around and explored,” Lubinsky told Current.

“From the time I did the first show, people have always come up to me and said, ‘You are the one who can bring doo-wop music back for the new generation,’” he said.

Twenty years ago, he was focused on reuniting the original artists who popularized the genre, he said, while thinking, “What happens when they are gone?”

A New Jersey native, Lubinsky made his name as a young TV director and on-air fundraising producer for Miami-based South Florida PBS. In 1997 he moved on to WQED in Pittsburgh, where, at age 25, he directed on-air fundraising. His pledge specials became breakout hits for stations across the country, and he eventually left the station to continue mining oldies nostalgia as an independent producer.

“A talent search resonates with people. This one has a good shot at enticing younger viewers to sample the genre.” — Fred Nahhat, senior VP of production, Detroit Public Television

Lubinsky jumpstarted The Next Doo Wop Star on Facebook last month with a soft launch seeking audition tapes from aspiring a cappella and vocal harmony groups. The formal call for auditions linked to the PBS pledge special went out Oct. 3. “As college a cappella competitions, live shows and YouTube videos prove, there are enormously talented young groups and individuals who are keeping the doo-wop tradition alive. We’re going to find them,” he said in the announcement.

The submission deadline is Nov. 10, and production starts in December. Lubinsky will select up to 12 acts to perform on The Next Doo Wop Star.

Entrants can be soloists or groups, and they don’t have to perform doo-wop songs in their auditions, Lubinsky said. He’s more interested in “the quality of the voices” and plans to work with each act to produce a doo-wop song that evokes an original performance.

“I might say, ‘Wow, if we had a third voice, I could give them a song from The Angels, The Shirelles or another girl group.’ Or maybe they are great the way they are,” he said.

He’s receiving at least 20 videos a day. “Some people are amazing. Some should just sing in the shower,” he said.

Lubinsky plans to shoot most of the show at a venue in South Florida, and may record smaller segments in Pittsburgh and New Jersey. He’ll travel anywhere to record the winners — even underground. “If there’s a subway group in New York, a really classic duo, why recreate that onstage? It tells a story,” he said.

Unlike The Voice, none of the artists will be eliminated in The Next Doo Wop Star, so the name is a bit misleading.

“I’d call them all up-and-coming stars, as these are strictly auditions, versus a contest,” said Lubinsky.

But, as in many popular competition shows, performances will be flanked by video vignettes of the backstory of each new act, offering insights into “why they got into it, why it shaped their lives, why they want to sing these songs,” Lubinsky said.

The show will also feature original doo-wop performers, who will work with the younger talent, and archival footage from Lubinsky’s previous PBS specials.

TLJ Productions put out an offer to stations to pay airfare for five couples to fly from anywhere in the public TV system to be in the audience for the show’s taping. As special guests, they’ll also get to meet and greet the doo-wop hopefuls and original artists.

Pledge premiums to be offered in March include CDs of both new and legacy artists, and DVD sets of the top 100 doo-wop songs. There’s a karaoke set in the DVD package, Lubinsky said, “so someone who … wants to sing doo-wop can listen to the vocals and teach themselves.”

If the show does well, he’ll organize concert dates for the new acts at station studios and local venues.

The doowopstar.com website is now accepting auditions. Lubinsky plans to launch an ongoing video series on the site with footage of groups he liked that didn’t make the cut. Detroit Public Television developed the site and is managing content rollout.

Some station executives aren’t convinced that the new format will resonate with the viewers who donate to pledge drives.

“If anyone can do it, TJ can. But I don’t quite see this as a pledge show,” said David Preston, v.p. of membership at Twin Cities PBS in St. Paul, Minn. “TJ’s brand is nostalgia, but the premise of this seems to miss that hook.”

Producers of PBS pledge shows have created some stars over the years, Preston said, but also delivered some duds. “I’ve seen a lot of no-name a cappella groups bouncing around pledge land.”

But Fred Nahhat, senior VP of production at Detroit Public Television, is optimistic about Lubinsky’s new concept. “A talent search resonates with people,” he said. “This one has a good shot at enticing younger viewers to sample the genre.”

“Any time we can create a new format to make [shows] bigger and more inclusive, it’s a great thing,” Nahhat added.

There’s a lot riding on the performance of this show. A multiyear contract between TJL Productions and PBS, inked in 2009, expires this spring, Lubinsky said. So far there’s been no movement on the network’s part to renew it.

“We have several more shows in the pipeline coming up in 2018, and we’ll take it from there,” said Rudy Casillas, PBS senior director of fundraising programming.

Lubinsky’s productions “are consistently some of the highest-grossing projects that we distribute to stations,” Casillas said.

A renewed contract is “really up to the stations’ needs and wants,” he added. “Certainly, he’s got a broad catalog that is going to be under contract for a very long time.”

WQED CEO Deborah Acklin, who hired Lubinsky in 1997 and worked with him on many of his biggest shows, said she’s glad he’s trying something new.