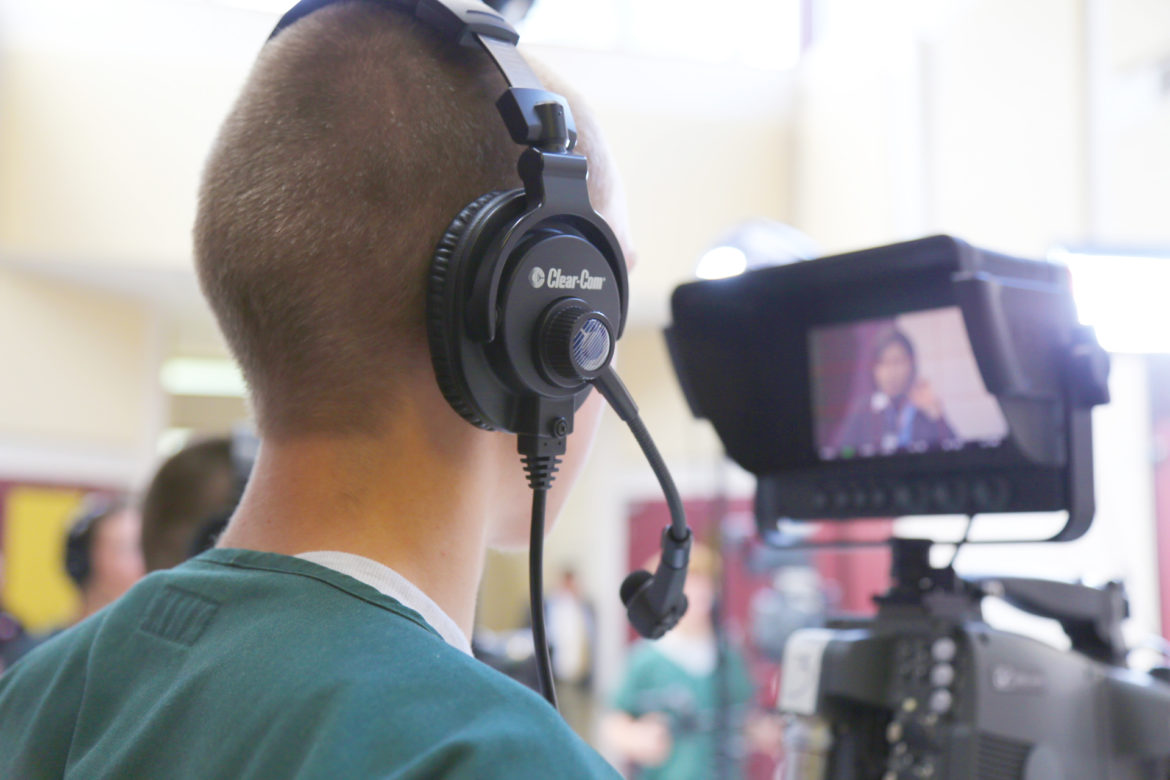 A resident at the Warren Regional Juvenile Detention Center in Bowling Green, Ky., operates a camera during a taping of WKU PBS' "Outlook."

An educational initiative developed by a Kentucky public broadcaster is turning teens who have been suspended from school into TV producers.

Students at The Academy at 11th Street in Bowling Green, Ky., are working with local station WKU Public Broadcasting this summer to produce episodes of the public affairs TV show Outlook. The classes build on a similar curriculum WKU introduced in July and August 2016 at the Warren Regional Juvenile Detention Center in Bowling Green.

“We’re a small station in a small market, [and] we’re doing exactly what we feel that’s important,” said David Brinkley, director of WKU Public Broadcasting. “When people sit down and get to enjoy PBS Kids in their homes, we forget about these youth that can’t just sit down and watch television because they’re locked up.”

Brinkley first made contacts at Warren Regional in 2011 while making a “scared straight” video for at-risk youth. He wanted to return to the center to teach residents technical skills and introduce them to job opportunities. The center is home to up to 20 alleged juvenile offenders awaiting trial.

WKU PBS staff installed the equivalent of a television studio in one of the facility’s vacant residential areas. Residents were eager to participate, learn about television and work on a tangible product on par with the station’s regular programming, Brinkley said.

“Had I not known that the residents at the detention center had made [the program], you wouldn’t have known it wasn’t one of our regular shows,” said Jordan Basham, WKU PBS special projects engineer.

Basham prepared the facility for equipment and trained residents. The experience was similar to working with college students, said Basham, which he does often because WKU PBS is a university licensee. “You’re still just working with young people who are eager to learn,” he said.

“People will give you what you invest in them. For some of these individuals, this was probably the first time that somebody walked in and invested time in them, and they reciprocated that.” — David Brinkley, GM, WKU PBS

One resident released the day before a taping expressed disappointment that he couldn’t stay for production, Basham said.

“It quickly became one of my favorite things about my job at WKU,” Basham said. “I have done a lot of production over the years, but nothing has had the impact that this has.”

Nick Spearman, a WKU student and WKU PBS staff member, also trained residents, teaching them how to operate cameras and do basic audio work. Participants enjoyed getting their hands on the equipment and asked many questions, which made Spearman want to continue teaching his craft to others in the future.

“In the time that I’ve been at PBS for the past few years, it has taught me to appreciate what I have and also how to give back,” he said. “The program … showed me that people are going to be receptive to learning from me.”

After the program, residents received a 30-hour certificate of workforce development training from WKU and were offered the chance to work for the station if they enrolled at the university.

“People will give you what you invest in them,” Brinkley said. “For some of these individuals, this was probably the first time that somebody walked in and invested time in them, and they reciprocated that.”

Brinkley wants to help facilitate similar programs at other stations across the country and has sent informational material to stations in Fresno, Calif., and Orlando, Fla.

Valley PBS in Fresno is in talks with a local school district about potential interest and funding, said President Phil Meyer. Such a program could extend the station’s educational impact beyond the 2- to 8-year-old demographic, Meyer said, and give older students direction and purpose.

Brinkley is also looking for grants to start programs at more facilities throughout Kentucky and to involve more engineers in the current program. WKU PBS had planned to repeat the workshop at Warren Regional this summer, but plans stalled after the detention center’s director resigned, according to Basham.