A 74-year-old Emmy and Peabody winner has traded his golf clubs for audio recorders and watching daytime TV for covering real-life courtroom dramas.

After joining WGCU in Fort Myers, Fla., as an unpaid intern last year, Michael Hirsh has been reporting on topics including a deadly police shooting, Pearl Harbor survivors, and a local debate over phosphate mining.

Hirsh has a background in journalism that younger interns can’t claim. He reported for KNX, a CBS affiliate in Los Angeles, before he was drafted into the Army. During the Vietnam War he served as a combat correspondent with the Army’s 25th Infantry Division at Cu Chi.

Hirsh went on to serve as an executive producer and project manager at WTTW in Chicago from 1971–83. He also worked as a program coordinator at 20th Century Fox Television and rejoined WTTW in 1988 as VP of program development and marketing for three years. 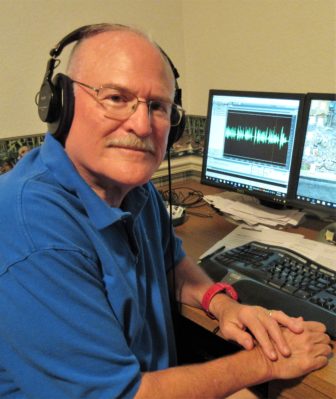 Hirsh editing a story at his home studio.

In 2002, Hirsh retired to Punta Gorda, Fla., and made a jump to writing books. He’s penned two mystery novels, several books on military history and a collection of military humor.

But it became time for a change. “You can only play so much golf and do so much fishing,” said Hirsh. And when Hirsh’s wife was nearly killed in a hit-and-run incident in 2015, he began to reconsider how he was spending his days.

Hirsh also said he was inspired to join WGCU by The Intern, the film in which a 70-year-old widower played by Robert De Niro, bored of retired life and scared of dying, joins an online fashion company as an intern. He thought of WGCU because he had previously appeared on the station to discuss his non-fiction book Pararescue in 2001. And he admires its high-quality, in-depth reporting. Most other radio in the area is “an incredible waste of brain cells,” Hirsh said.

Older volunteers help WGCU with mailings, live events and its radio reading service, according to Amy Tardif, station manager and news director. But none was willing or qualified to report for the station. Tardif said she knew immediately that Hirsh would be a good fit at WGCU given his prior experience, which allowed them to focus on big-picture ideas for Hirsh’s coverage from the start.

The intern’s time on the job varies depending on what he’s covering. Hirsh works just one day some weeks, then almost 40 hours the next. He recently spent six days in court covering the trial of a police chief. 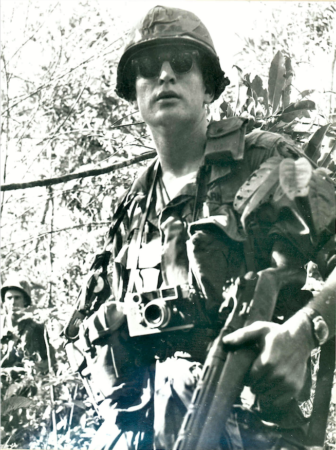 Hirsh in his years as a combat correspondent with the Army’s 25th Infantry Division.

“He knows how to dig to get the right and the unusual information and materials,” Tardif said. And Hirsh has added to the station’s coverage of Punta Gorda, which is 30 miles north of Fort Myers.

Mastering new technology and keeping his radio segments short have posed the biggest challenges, Hirsh said. “Here are the seven most terrifying words Amy Tardif can say to me: ‘I want you to do a minute,’” he said.

“He was used to writing literal books, not having to mix his own pieces, and probably a bigger budget,” Tardif said. “But I think he’s over the fear of writing shorter, getting edited and using Adobe Audition.” Colleagues value Hirsh’s work because he turns stories around quickly, has great instincts and pitches interesting and newsworthy coverage, Tardif said.

Hirsh said that focusing on reporting has helped take his mind off of his mortality and served as therapy. Working for WGCU has given him a sense of purpose, which he had lost writing books due to the grueling commitment and often small payoffs.

“I’m able to work with the one place that’s trying, and doing it, with a staff that really cares and holds the values of NPR and good journalism,” Hirsh said.

Correction: An earlier version of this story misstated the year in which Hirsh’s wife was involved in an accident. The correct year is 2015.