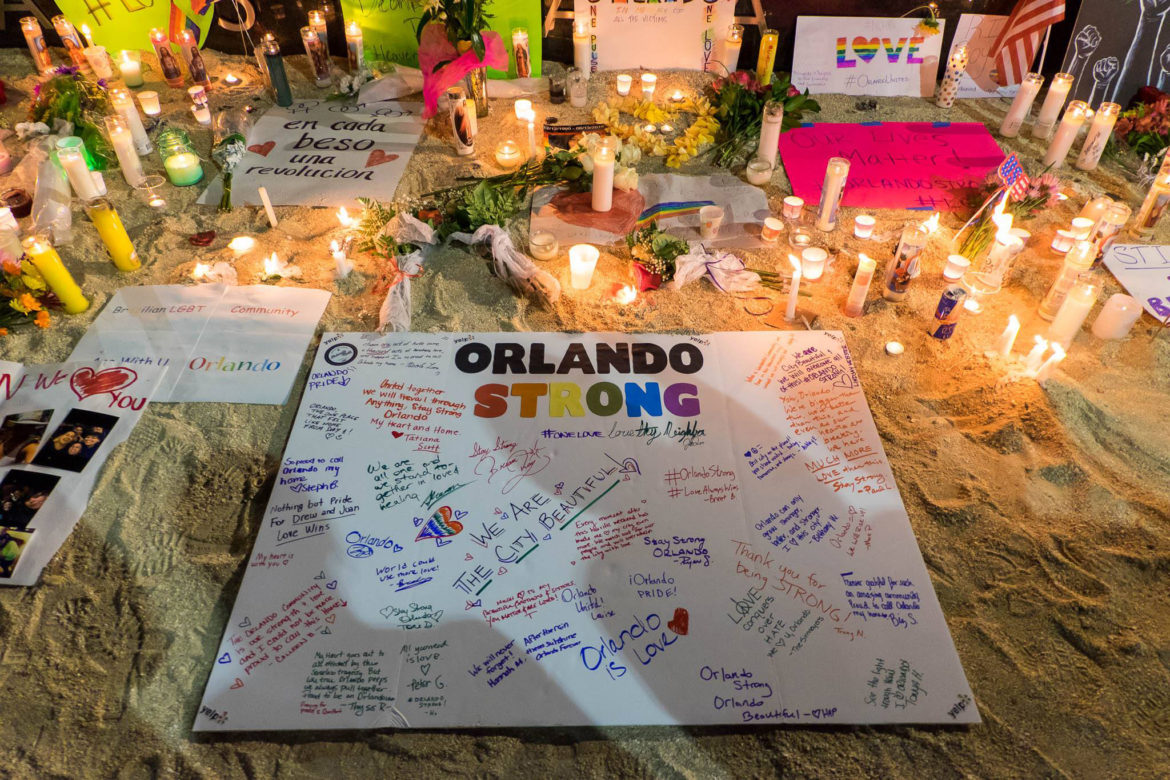 Mourners left signs, candles and mementos on the grounds of a performing arts center in downtown Orlando.

A year after the nation’s deadliest mass shooting, Orlando public radio station WMFE has crafted an ambitious tribute to the 49 killed and 53 wounded at the Pulse nightclub — the six-part Spanish-language podcast Orlando, Un Año Después (Orlando, One Year Later).

The tragedy in the predawn hours of June 12, 2016, was a savage amalgam of terrorist attack and hate crime. The shooter, who was killed by police, pledged allegiance to an ISIS chief, and many of the victims were Latino and gay. The massacre, which occurred on “Latin Night” at a popular gay nightclub, reverberated with issues of race, culture, sexual orientation and religion.

WMFE wanted to explore these topics in the language of the community most directly impacted, said News Director Catherine Welch. The shooting exposed a need for better communication on several levels, she said.

The shortage of translators to assist victims and their families in hospitals became apparent on the day of the shooting, Welch added. “But … I didn’t realize what an issue that was until we started reporting on it,” she said. One podcast episode focuses on the language barriers faced by friends or relatives of victims as they sought help or information.

Welch’s more sweeping goal is to reach beyond the local community to a national and international audience with shared experiences. WMFE has a track record of success with podcasts that attract international followings. Its space podcast, Are We There Yet?, has garnered more than 500,000 downloads from around the world since launching in March 2016.

As Welch thought about how to cover the anniversary of the shooting, she recognized it as a global event. “Stories were coming out about people who were outed by the shooting,” and conflicts with family and religious values, she said. If listeners from Venezuela, Puerto Rico and New Mexico heard it, they could draw strength from stories coming out of Orlando. “They could hear it in their own language, and it would bridge a gap.”

“My goal was to reach out to families of gay Latinos, who maybe don’t have a sense of the issues — the mother in Argentina of a gay son who died, the mother of a gay son in Orlando. And the only way that could happen would be in Spanish.”

Orlando, Un Año Después will be released in its entirety Wednesday in conjunction with an English-language podcast Life After Pulse. In six episodes, that show also explores the aftermath of the shooting. The two projects were developed and reported separately. 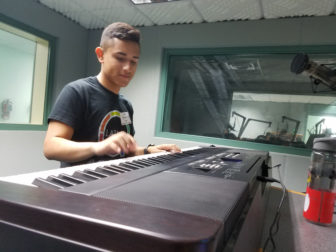 Orlando musician Ishmael Perez records his piano version of “Love Makes the World Go ’Round,” a song used in the soundtrack for both of WMFE’s podcasts.

The Spanish-language podcast features interviews with law enforcement officers who were first at the scene and delves into the long waits for Spanish-speaking families seeking the status of loved ones at hospitals. It examines gay club culture in Orlando post-Pulse and the fine lines walked by faith leaders.

Crystal Chavez, a reporter and host of All Things Considered on WMFE, oversaw the production. “There was so much to unpack” in how Catholic and evangelical churches responded to the shooting, she said. “In the beginning, they were praying for people but not changing their [anti-gay] rhetoric. And now, checking in a year later, they lost that high ground.”

The episode “El Pulso de la Comunidad de Fe” (“The Pulse of the Faith Community”) looks at Iglesia El Calvario, a large local evangelical church with a primarily Latino congregation that held a funeral for one of the victims. The church doesn’t have anything planned to mark the one-year anniversary of the shooting.

The English-language podcast explores the motives of the shooter, Omar Mateen, a 29-year-old security guard; tackles identity issues and the burdens and triumphs of being gay; profiles Pulse owner Barbara Poma and her plans to turn the nightclub into a memorial and museum; and analyzes the response of law enforcement and of the Orlando Regional Medical Center, where 44 of the victims were taken.

Producing the anniversary coverage as a podcast allowed the team to look deeper into the community’s response. “We had a chance to go long and … to say, ‘What are the things we want to look at?’”

Welch said she was partly inspired by Katrina: The Debris, a podcast by New Orleans NPR station WWNO on the impact of the devastating 2005 hurricane.

Members of the WMFE team acknowledged that the decision to produce a Spanish-language podcast created a marketing challenge since, until recently, its Latino listenership has been small. The station plans to reach out to Spanish-language TV stations Telemundo and Univision, Spanish-language newspapers, local Latino organizations and LGBT groups. It will put flyers in Latin restaurants and tout the podcast on its own air.

Still, WMFE is now in a better position to catch the ears of Latinos than it was several years ago. GM LaFontaine Oliver has been ramping up outreach to local communities since signing on four years ago. Nielsen data provided by WMFE show that 17 percent of listeners identified as Latino in first quarter of 2017, up from 6.9 percent for the first quarter of 2016.

After joining the station, Oliver worked with WMFE staff, board and other stakeholders “to reimagine our position in the market,” Oliver said. The “deep engagement strategy” that came out of those efforts is beginning to pay dividends. “It has given us a certain currency in [varied] communities,” he said.

And to engage different communities in its market, the station is now a constant presence at local events, such as the Orlando Latin Food & Wine Festival.

“We are doing a lot that puts us in front of our audience,” Oliver said.

The Pulse tragedy has altered the DNA of both WMFE and the city it serves, Oliver said. Now Orlando is one of a growing number of municipalities that have experienced tragic acts of terror-related violence — Manchester, England, being the latest.

“We’ve kind of become a member of this fraternity of stations who have had these big tragic events happen,” he said.

“We need to be talking about this as a larger system.”

To help other pubcasters prepare for crises, WMFE put together a playbook that Oliver presented at last year’s Public Radio Super-Regional Meeting. He encourages colleagues to think through how they would handle a similar event in their communities. “It can happen any day and anywhere,” he said. “Have a strong plan in place. [Know] who is going to do what when … and on a regular basis test that plan.”

Orlando PBS station WUCF has also begun advising other TV stations on responding to tragedies. The station, which had been owned by WMFE’s licensee until a 2012 sale to the University of Central Florida, has no news department. But it established a vibrant website in response to the Pulse shooting. During a May 15 session at the PBS Annual Meeting in San Diego, WUCF Communications Director Jennifer Cook joined executives from stations in Dallas, Louisiana, South Carolina and Oakland, Calif., to discuss recent crises in their communities. The goal was to help stations begin planning emergency responses and reduce reaction time to crises.

For its first response to the shooting last summer, WUCF converted its website into a hub for advice on counseling and family services, and notices of blood drives, food donations and other services, Cook told Current. Station staff collaborated with child psychology experts from the University of Central Florida and producers of children’s shows such as Sesame Street and Daniel Tiger’s Neighborhood.

As a follow-up to the PBS Annual Meeting session, WUCF is working on a toolkit to share with other stations. “We need to be talking about this as a larger system,” Cook said.

WMFE’s Chavez said the Pulse shooting has been a constant in the station’s news coverage for the past year.

“It touches everything we do,” she said, “It feels like we are constantly following it. It has changed conversations. It is not what Orlando set out to be known for, but it is part of the identity now.”