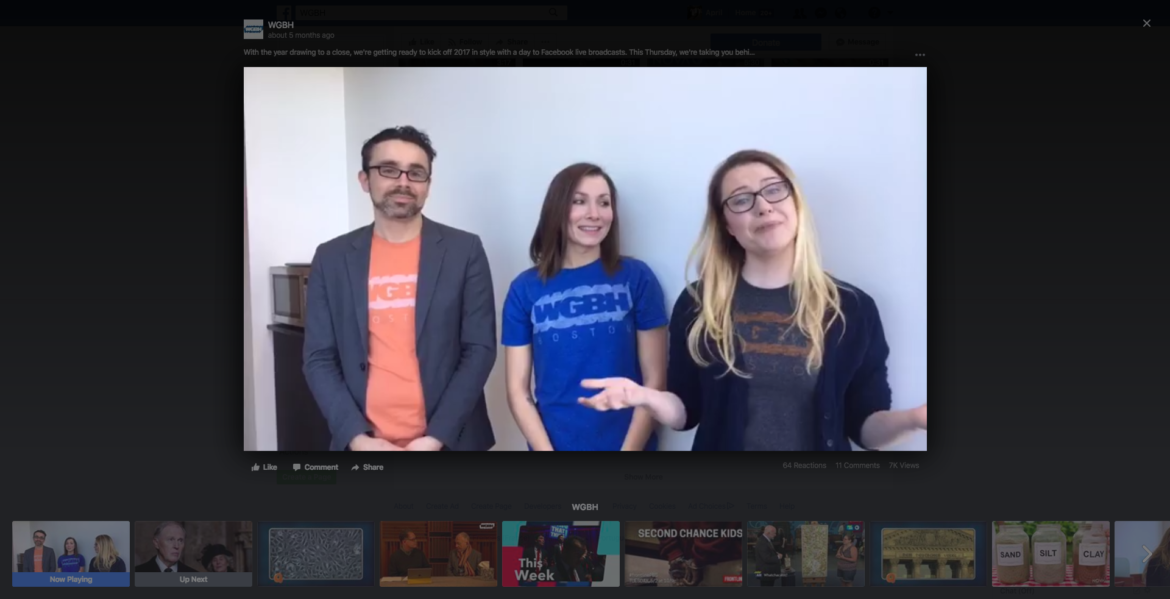 WGBH staffers introduce a daylong series of Facebook Live videos in December to take viewers on a tour of the station and interview local hosts.

Boston’s WGBH will fundraise on Facebook Live for the third time in June after seeing promising results from two previous pledge drives.

WGBH tested the platform in June and December 2016 by bringing viewers behind the scenes with live pledge segments of up to 30 minutes. The station didn’t track which donations came in specifically due to Facebook Live, but did see a higher increase in digital donations overall in December, according to WGBH staff who directed the pilots.

“Everyone’s trying to raise money with social media, and it’s a challenge for everyone,” said Frank Auer, director of digital marketing services. “No one’s really cracked it yet, so we basically said, ‘What else can we do?’”

The station’s first experiment with Facebook Live in June 2016 promoted the segments via email, its website and Facebook-promoted posts.

In the videos, which were streamed from both iPhones and TV cameras, employees interviewed local hosts and others around the building as they went about their work. Each of the staff appearing in the segments talked directly to the audience.

During one video a speaker looked into the camera and said, “Right now we actually do want to focus on the reason why we’re here today. It’s because we are doing a bit of a test to see just how much WGBH’s digital content means to you. If it does mean something to you, click on that link that’s part of this post right now.”

Some videos cut to extended prerecorded segments, such as interviews with athletes and experts talking about the highs and lows of running the Boston Marathon. The seven Facebook Live videos, all streamed June 29, reached a total of nearly 122,000 views. WGBH saw an 84 percent lift in digital revenues in June 2016, bringing in an additional $7,858 when compared with the same three-day period in June 2015, Auer said.

For the December pledge drive, WGBH made several changes. Auer’s staff started planning earlier and worked more closely with the pledge team. WGBH cut back on paid promotion and relied heavily on “organic reach,” or unpaid distribution. The video content was similar, but included fewer prerecorded segments, which created an authentic sensibility but also resulted in a tighter schedule, Auer said. More videos were streamed from an iPhone to give them a looser feel.

A Dec. 13 launch video alerted Facebook followers to the plan: WGBH would take viewers on a tour of the station Dec. 15 and interview local hosts. Videos tended to run shorter than in June.

The 10 videos garnered more than 32,000 views, far fewer than the segments produced for the first fundraiser. The launch video was the most-watched, peaking at 7,000 views, although it didn’t have a donation form attached.

The December effort was low-cost but had a positive impact on giving, Auer said. Auer and Michal Heiplik, executive director of the WGBH-based Contributor Development Partnership, credit more than $30,000 in additional digital revenue to the effort, compared with the same three-day period a year prior. It attracted far fewer viewers, but the total attributed to their gifts was nearly 75 percent higher than the first outing.

The videos directed viewers to donate through WGBH’s online system, not Facebook’s. By sending all viewers to its own website, WGBH gave donors the option of signing up as sustainers, and it didn’t have to pay Facebook’s 5 percent surcharge.

Through the two efforts, WGBH learned lessons underscoring the importance of authenticity and planning.

“The content has to be real and genuine,” Heiplik said. “It has to be noticeable that whoever is featured in that live broadcast that they care. They’re as nerdy as we all are and as curious about public media.”

“You can have authenticity with planning,” Auer added. “I think that’s key.”

The team also learned that strong visuals are key to capturing the attention of Facebook users, Auer said. A great interview alone won’t stop them from scrolling through to the next item on their news feeds. One of the best-performing videos in December was an interview with jazz host Eric Jackson, who sat on a couch in front of a whiteboard bearing musical notes and other scribblings.

WGBH also found that promoting interviews with people who have large followings on social media helped to boost viewership. An interview with A Celtic Sojourn host Brian O’Donovan, who was celebrating the show’s 14th annual live holiday broadcast, drew 6,400 views. The station saw an 81 percent increase in online revenue that day — excluding revenue generated from radio/TV pledge — from what had come in during the same period the previous year, Auer said.

The success of the O’Donovan interview can be attributed to listeners tuning in to the broadcast, but “even if you remove that portion of people who are Celtic fans, it still performed very well,” Auer said.

In June, Auer’s team will test different prerecorded segments, vary posting times to catch Facebook users at home and consider running the segments over multiple days instead of one. It will also experiment with different visuals to try to grab the attention of Facebook users scrolling through their feeds. Each day may have its own look derived from shooting style, colors or locations, said Auer. For example, the segment shot at the theater that hosted the Christmas Celtic Sojourn special was more visually appealing than videos set in an office or studio.

“How many years did it take pledge to figure out what they’re doing?” — Frank Auer, WGBH director of digital marketing services

WGBH may test using the Facebook Donate button rather than linking to its own donation forms, but that’s a lower priority, Heiplik said. WGBH still wants donors to give through its own forms, so it can encourage sustaining gifts.

The station’s efforts haven’t created a template that can be easily repeated, Heiplik said. Each Facebook Live test requires modifications to ensure the video feels authentic and captures viewers’ attention. “You can’t run the same program every quarter and hope you’ll have success,” Heiplik said.

But with each test WGBH gains insight into a new medium. “How many years did it take pledge to figure out what they’re doing?” Auer asked.