Despite eye-popping windfalls for some stations, the FCC broadcast spectrum auction was a disappointment for public media.

Here’s why: Prior to the start of the auction, the prevailing wisdom was that the forward auction would generate anywhere between $30 billion and $60 billion in gross proceeds. Some experts were even more bullish — predicting numbers of $80 billion and greater, which would indicate a windfall for public media as well. In our own analysis, using simulations from Charles River Associates, we predicted as much as $37 billion for all winning broadcast station bidders and $6.8 billion for public TV alone.

But the cellular companies did not show up as predicted, and as a result the forward auction generated $19.8 billion in gross proceeds, with $10 billion going to successful broadcast station bidders — including an estimated $1.9 billion going to 34 license-holders of public media stations. 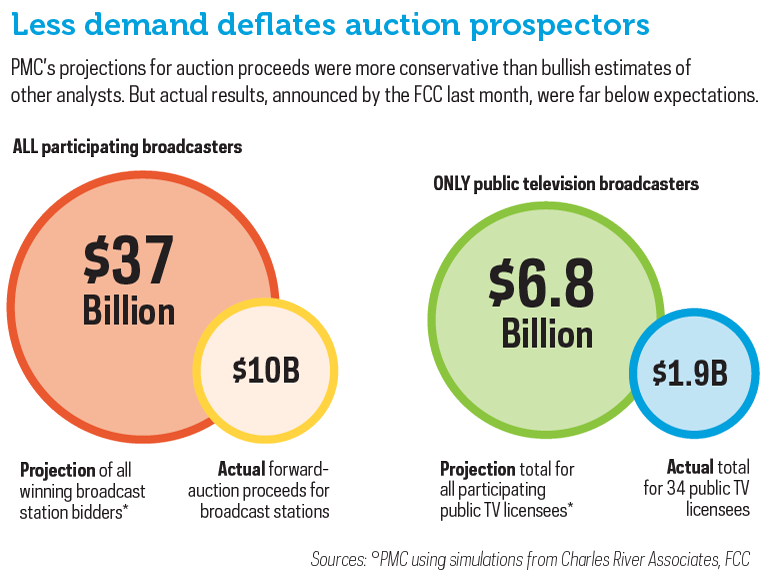 This $1.9 billion estimate for public stations may still increase. Some stations may not have disclosed pre–quiet period channel-sharing agreements, and others may still enter post-auction sharing agreements. It also remains to be seen how much of that $1.9 billion stays in the public media economy and how much is diverted by license holders to other institutional priorities.

It appears that no significant market has lost public television service, although loss of translator service in rural areas continues to be a significant concern.

Many public broadcasters saw the auction as an opportunity to change the trajectory of their station’s financial health — to pay off debt, invest in technology upgrades or create an endowment. Proceeds would have provided the capital that some stations need to break out of barely sustainable television operating models and reinvent themselves as modern digital media companies. They would have gained the ability to innovate and create new service and revenue models.

Unfortunately, most licensees that initially elected to participate in the auction did not benefit. They either dropped out of the auction when prices declined below what they thought their stations were worth or they learned that there wasn’t a market for their spectrum after all.

With the auction over, public stations are tackling the repack: 167 full-power public television stations will be repacked into new channels. This is about half of the entire public television system. These stations face a very intense technical planning and build-out over the next 39 months. Station leaders must redesign their transmission plants; engage engineers, technical consultants and tower crews; make long-term equipment choices; coordinate with other repacking stations; and plan for any ATSC 3.0 technology upgrades that will not be funded by the repack reimbursement fund.

The FCC reserved a portion of spectrum auction proceeds to reimburse broadcasters for the costs of moving to new channels, but uncertainties over how much will be paid for by this repack fund are palpable. The FCC’s current intention to reimburse repack costs “up to 90 percent” up front and “100 percent after square-up” is dependent on total repack costs coming in at $1.75 billion or less. If the repack costs more than $1.75 billion, the up-front reimbursement will be less than 90 percent, and the total reimbursement will be less than 100 percent. The National Association of Broadcasters is estimating that the repack will cost $2.5 billion. If that proves more accurate, a station’s potential reimbursement will be significantly less than expected.

Next steps toward a new service model

Strategically, we believe the future of public television is ATSC 3.0 (aka Next Generation Television), but there’s also a near-term option for some stations to participate in post-auction channel-sharing — the last opportunity to collect a portion of auction revenue to fund future reinvention.

We see three steps for moving forward to address the challenges ahead for public TV.

It’s still possible for some stations to trade spectrum for revenue. Commercial broadcasters that accepted relinquishment bids in the auction are now required to surrender their spectrum even if they hope to continue broadcasting. Executives of these stations are highly motivated to find a post-auction channel-sharing partner. Public television stations that held onto all of their spectrum are well-positioned to negotiate a channel-sharing arrangement as a host station. Such agreements could provide significant ongoing revenue for a public television station and support its technical and organizational transformation into a Next Generation Television public media entity.

Public Media Company thinks stations benefiting from the auction could create a win-win opportunity by pooling some of their proceeds in a Public Television Investment Fund.

There’s a related channel-sharing opportunity, too. Some commercial stations that accepted relinquishment bids do not want to continue broadcasting. They still have an asset, though: the license, which no longer has spectrum attached to it. These “naked” or “zombie” licenses could be valuable to a public television station.

Public Media Company has had conversations with commercial broadcasters that hold naked licenses and may be willing to donate them to a public television station. The commercial owner benefits from the tax deduction generated by the donation.

Would this be a gift worth considering? Yes. A public station could allocate some of its bandwidth to this naked license, essentially doing a channel-share with itself. The bandwidth assigned to the naked license could be used for commercial activities that would not be permitted under a public broadcaster’s own noncommercial educational license. In addition, this commercial license is as tradable as any broadcast license, so the public station would have the opportunity to sell it (with the allocated bandwidth) in the future.

Step 2: Plan for the repack as a strategic opportunity, not just as an equipment-replacement program.

The FCC’s repack fund is essentially a $1.75 billion investment in television. Both commercial and public broadcasters question whether it’s enough money to re-engineer and build their technical systems and infrastructure.

But let’s look at it a different way.

Instead of thinking of the fund as the source for 100 percent reimbursement of the costs of replicating your station’s existing capability, think of it as a matching-grant program providing up to an 80 percent investment in your station’s technological future — Next Generation Television. Eighty percent is similar to the match that existed under the former Public Telecommunications Facilities Program, which for decades was the primary source of funding for equipment upgrades in public broadcasting.

While repacking costs will vary by station, a rule-of-thumb estimate is that broadcasters will pay 20 percent more to build an ATSC 3.0 facility compared to the cost of simply replacing their ATSC 1.0 facility. What business owner offered a no-strings-attached 80 percent investment in a promising and new business line directly related to his or her current market position would pass up that offer?

Next Generation TV is coming at us rapidly. By the time most stations finish repacking, it will be here. We believe lucrative business-to-business revenue opportunities will come with it — opportunities that do not depend on consumer adoption or cable carriage.

We often hear comments from public broadcasters that there’s no need to move quickly on ATSC 3.0, yet dragging our feet risks handicapping public television stations in a rapidly changing and increasingly competitive technology environment. We suggest making every effort to build a fully capable ATSC 3.0 transmission plant now.

For stations that did have transformative earnings from the auction, it’s important for them to plan as well — not just for their own long-term viability, but for the viability of the system as a whole. Remember, we are all interconnected. The depth and quality of our service, especially content from PBS and other national producers, depends on national reach through healthy local stations. The model will fall apart if we begin to lose rural service or if our national reach is impaired. A healthy system means that we all survive, thrive and cross the divide to the new digital world.

Public Media Company thinks stations benefiting from the auction could create a win-win opportunity by pooling some of their proceeds in a Public Television Investment Fund. We’re not proposing changes in grant or dues formulas that would shift funds from stations with auction proceeds to stations without. Instead we are suggesting that auction beneficiaries voluntarily invest a modest portion of their revenue in a common enterprise — a fund that would be focused on station-based innovation. These investments would generate a competitive return for investing stations; those stations whose innovations are backed by the fund would generate additional services and revenues. Both the public television system and the public would benefit.

We need to be realistic, persistent, creative and entrepreneurial to navigate through the post-auction world with less capital.

Yes, there is some risk in creating and managing an investment fund. But this risk is mitigated by the fact that those of us in the system know our own industry better than anyone. Opportunities abound in education, public safety, online initiatives and in the potential to leverage the capabilities of Next Generation Television for public service. The most significant obstacle in our industry has always been access to capital. A public television investment fund could help address that need and generate returns for investing stations as well.

Look to Next Gen Television

The future of all media is more content in more forms, delivered digitally on more devices. Next Generation Television is the pathway for public television to realize that potential, and it can be ushered in by a robust investment in stations, the foundation of the public media system.

We need to be realistic, persistent, creative and entrepreneurial to navigate through the post-auction world with less capital. We must move to Next Generation Television quickly and turn its potential into real service and revenue. We all need to come together to accomplish this: auction “winners,” major-market stations, small-market stations, state networks, national organizations, lay leaders and donors.

Public Media Company is investing its time and financial resources in the process of planning for and implementing this station-focused transition into the future. We’re gathering a hearty band of innovators in this effort and are optimistic about the prospects for a truly innovative, dynamic and locally rooted network of public media entities. We need to be optimistic — the vitality of our cultural landscape depends on us succeeding.

Marc Hand is CEO and co-founder of Public Media Company, a national nonprofit that fosters public media growth. He builds strategic public media alliances, educates financial institutions on public media investments and provides expertise on all aspects of public media transactions based on his 30-year career as a public and commercial media advisor and owner of commercial stations. Hand spent five years at the Station Resource Group helping public radio stations expand services via acquisitions, collaborations and partnerships, leading to the development of Public Media Company in 2001.

One thought on “In aftermath of spectrum auction, even stations that sat out could still benefit”