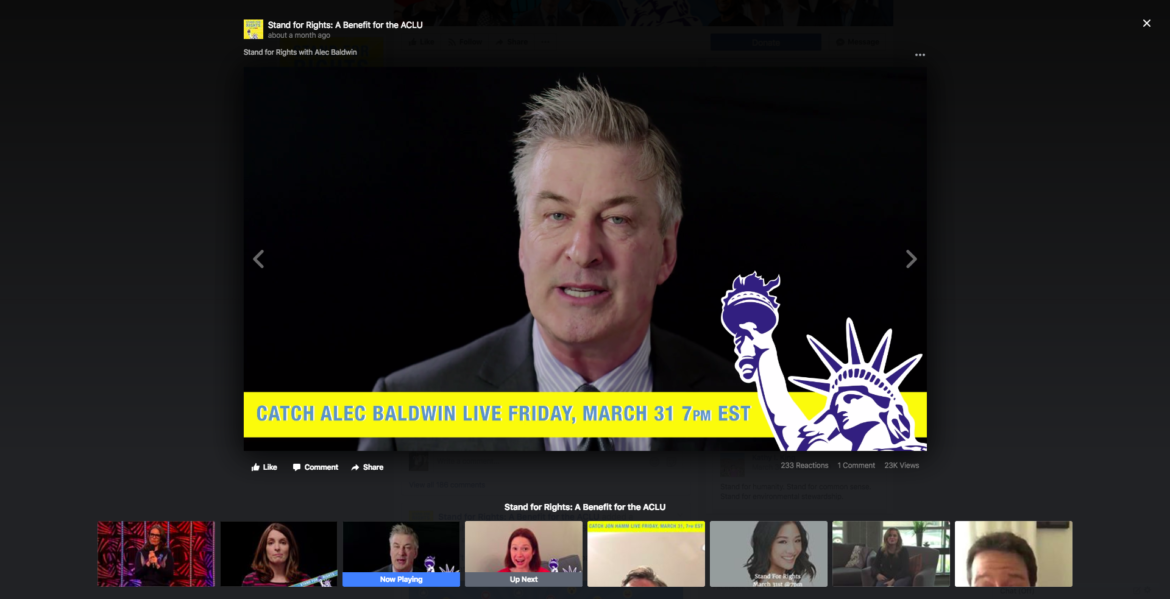 Actor Alec Baldwin promotes the ACLU Stand for Rights fundraiser in a video posted to Facebook.

A strategy to cultivate younger donors inspired the American Civil Liberties Union to experiment with a telethon-style fundraiser that drew from public broadcasting’s toolbox for on-air drives and mobile giving.

Stand for Rights: A Benefit for the ACLU, a Facebook Live fundraiser March 31, brought out celebrity after celebrity over nearly four hours. Tom Hanks hosted the Friday-evening telethon, which included pitches and lighthearted conversations with Tina Fey, Tracy Morgan, Michael Moore and other entertainers. Loosely based on public media pledge drives, the livestream also featured prerecorded celebrity pitches, musical performances and highly produced mini-documentaries about beneficiaries of the ACLU’s activism.

The event went from the idea stage into live production in a few weeks. Organizers sought input from public media consultants on best methods for encouraging mobile giving and fundraising on television.

“The irony is one of the producers started going at this and realized, ‘We know how to produce a show, but don’t know anything about fundraising,’” said Nick Allen, who served as principal advisor to an earlier mobile fundraising test for Station Resource Group. Allen, president of fundraising and advertising firm Open America, and his team were brought in to manage strategies around mobile and social media giving. Dick McPherson, a veteran adviser to public media stations, offered techniques for making pitches for donations.

Since Facebook Live’s launch last year, nonprofits have been trying it out as a medium for fundraising. In public media, WGBH saw positive results from two tests of Facebook Live that coincided with pledge drives. The Boston station will mount a third Facebook Live fundraiser in June with a much different approach than the ACLU — taking viewers behind the scenes for live pledge segments of up to 30 minutes.

Not your average telethon

“We’re all overwhelmed, but listen, the ACLU is on it,” chimed in others.

So began Stand for Rights, which streamed live on Facebook pages for the ACLU, Funny or Die, and Huffington Post to broaden its reach.

The idea of supporting the ACLU originated with Fey and her producers. “It’s not sexy, but it’s vitally important to every American,” said Eric Gurian, EP of the Facebook Live fundraiser, noting the ACLU’s nearly 100-year history. “So we thought, ‘That’s a great nonpartisan organization that we can help.’”

“We had never put on an event online before. We all work in traditional media.” — Eric Gurian, EVP, Little Stranger

The production was designed as a contemporary spin on live telethons, and adopted some on-air pitching tactics of public TV drives.

“Telethon is sort of an old-fashioned technique,” Allen said.

But it was the producers’ preferred format. “We grew up loving these telethons, usually for very sad causes: Jerry Lewis and other major benefits that are forces of entertainment for good,” Gurian said. They wanted the show to entertain and treat subjects seriously.

Initially, Gurian’s team considered producing a 24-hour fundraiser that would end on April Fool’s Day. “Then we realized 24 hours is a crazy idea,” Gurian said.

The producers and the ACLU chose Facebook Live as their platform because it gave them the best shot at building an audience within the three-week timeline they we were working under.

One of Fey’s producers reached out to public media fundraising consultant McPherson for guidance. The approach they developed was a hybrid of direct-to-audience fundraising that public stations use and a celebrity-infused telethon.

The timing was set for a Friday evening because it happened to be a day celebrities could commit to, Gurian said. The entertainers didn’t need much convincing. Many of them are friends and colleagues of the producers, Gurian said.

People donated time, sets and artistic talent. Unlike a typical Facebook Live stream, the event had the production values of a TV show shot in a midtown Manhattan studio, which it was. Gurian declined to discuss production costs other than to say “it was a profitable evening for the ACLU.”

Allen’s team, which works with large national and international nonprofits, developed a plan for the fundraiser within a week. “The nice thing is everything had to be decided right away,” Allen said. “You know it might not be the best choice, but you don’t have the time to deliberate on it for a few weeks.”

“There are people far more savvy at this than we were about it,” Gurian said. “We had never put on an event online before. We all work in traditional media.”

Similar to WGBH’s first run with fundraising on Facebook Live, organizers promoted the event primarily via Facebook advertising. Celebrities like Katy Perry and Hanks alerted their social media followers. “Tina Fey is not on Facebook and proud of it,” Allen said.

Protecting our freedoms doesn’t come free. That’s why I’m tuning in to Facebook live, TODAY at 7:00p ET to see Tom Hanks, Tina Fey & friends to raise and for the ACLU. Join me. Watch the live stream. #standforrights2017

Since viewers were asked to tune in at a specific time — Friday, March 31, at 7 p.m. Eastern — the assumption being that Facebook users in multiple time zones would be watching on their smartphones.

A first for ACLU

Nearly 4 million people viewed the ACLU show on one of the three Facebook pages that fed the  livestream. The effort brought in more than 9,000 individual donations and raised about $460,000 the night of the event. Donations continued to come in afterwards, and the fundraising total eventually topped $600,000, according to Allen. That sum includes about $80,000 collected from the dedicated Huffington Post page. The Huffington Post also cut the four-hour program into digestible bits and posted them to its Facebook page.

Sixty-five percent of gifts came through a Facebook donate button, while 35 percent were  text-to-give donations. ACLU aims to convert between 10 and 20 percent of the text-to-give contributors into monthly sustainers to increase their long-term value, Allen said. Facebook collects a 5 percent operational fee for donations completed through its system.

McPherson described the response to the live fundraiser as somewhat disappointing for the organizers. “I know everyone hoped for a higher immediate result,” he said, adding that “it’ll be a while to know how much it actually raised.”

The fundraiser does have potential for a longer tail than an on-air campaign for a public station, he said. “Once a drive is over, it’s more or less over. This may continue for a while, as people who missed it discover Alec Baldwin said something funny.”

In WGBH’s experiments with Facebook Live, the station saw a boost in digital donations. Its December 2016 fundraising drive brought in an additional $30,000 in online contributions, compared with the same three-day period the previous year when it did not use Facebook Live, said Michal Heiplik, executive director of the fundraising group Contributor Development Partnership, which is based at the Boston station.

WGBH took a different approach, producing several short videos, mostly shot on iPhones over the course of a day. WGBH also linked to its own online donation forms.

Typically in a fundraising campaign — whether donations are solicited through direct mail,  face-to-face meetings, a gala event or an email blast — the organization knows the size of the audience it will reach and has an estimate of the conversion rate, or the proportion of the audience that’s likely to contribute. But not the ACLU fundraiser. “We didn’t know the denominator of the numerator because no one had done it before,” Allen said.

So Allen says organizers didn’t set specific goals for fundraising or viewership. Facebook has a large potential audience — 182 million daily active users in the U.S. and Canada, according to company stats. Each organization whose Facebook page streamed the live event — the ACLU, Funny or Die, and the Huffington Post — has millions of Facebook followers.

McPherson says he advised the group to stress the importance of local support by frequently mentioning that the ACLU works in all 50 states. He also suggested they build audience mostly through celebrity tweets.

PBS, NPR and their member stations have built-in audiences for their fundraising promotions, while the ACLU team had top celebrities but no established platform, he said. “People like Tom Hanks have millions of followers, but nobody would know to, so to speak, tune in on the night of the telethon.” He also emphasized the need for challenge money to encourage donations if giving slows. “Most stations rely on that,” McPherson said.

During the show celebrities pulled stunts to encourage donations, but there weren’t any challenge matches to get lots of viewers contributing toward a goal. At one point, Top Chef Producer Padma Lakshmi offered a walk-on appearance for the show to the next donor to give $5,000. A Twitter user alerted Silicon Valley investor Chris Sacca, who tweeted at Lakshmi that he was sad to have missed it. “Can I go $10,000 for a spot?” he asked.

Just mentioned your offer on the live broadcast! If you add a zero, I'll cook you dinner too! #standforrights2017 @ACLU https://t.co/ed0k4QHeJQ

Looking back on the hasty decisions made in the run-up to the event, Allen said he would have encouraged celebrities to make personal commitments to match viewers’ donations. He also would have slowed down the pace of the program.

“There’s a certain point when you have to be quiet and let people give,” Allen said. “I think that’s also true in a show. Maybe there’s a clock running on the screen, but you give people time and space to make a gift.”

By late April Allen hadn’t heard whether anything came of Sacca’s offer.

One thought on “ACLU fundraiser looks to public media for guidance”