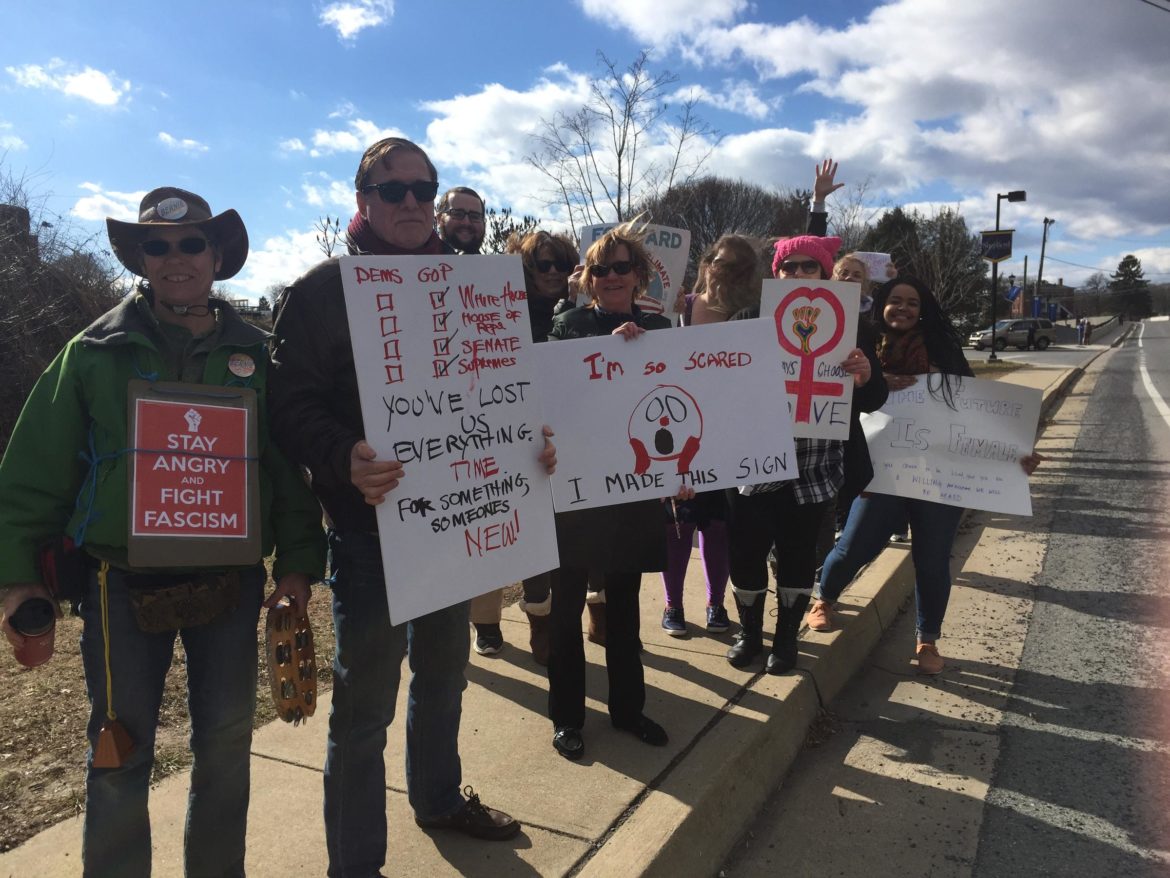 Supporters and detractors of Donald Trump both stood outside a meeting of Democratic senators in Shepherdstown, W.V., Jan. 26. WVPB covered the event for 100 Days in Appalachia. (Photo: WVPB)

Public media journalists are casting a wide net for reactions to the election of Donald Trump with a variety of projects focused on the new president’s first 100 days in office.

Some, like a collaboration on covering Appalachia involving West Virginia Public Broadcasting and two other partners in the region, are using demographic data to target new audiences and better represent a region that they believe national media often misunderstand.

Others, like North Country Public Radio in New York, have deepened local coverage by gathering audience feedback. And Public Radio International is using social media to engage a global audience and foster dialogue about what Trump’s priorities should be.

Two years ago, West Virginia University, WVPB and the Center for Rural Strategies, a nonprofit with offices in neighboring eastern Kentucky and eastern Tennessee, began discussing how to cover rural America as fewer local publications and bureaus were covering statewide issues. The partners had also noticed that though the region’s states shared similar challenges, residents weren’t always aware of what was going on across their shared borders due to gaps in media coverage.

“It may be easier to know what’s going on five counties over in your own state than it is to know what’s happening in the next county, which happens to be over the state line,” said Tim Marema, VP of the Center for Rural Strategies and editor of the Daily Yonder, a rural-news website published by the center.

As it joined the partnership, WVU had been focused on growing its media program. “Our model has been to not do what everybody else is doing,” said Dana Coester, creative director of the Reed College of Media Innovation Center.

Rather than create a student-run newspaper of local coverage, the college took cues from publications like Quartz and News Deeply, which focus on analysis instead of daily headlines. The Media Innovation Center saw an opportunity to focus on delivering content and building audiences, using data and analytics to reach niche audiences, Coester said.

The school was moving toward creating a Quartz-like publication. “Then the election happened,” Coester said. The next day, “the dean and I sat down and said, we need to rethink what we’re doing, and we need to go quickly,” she said. 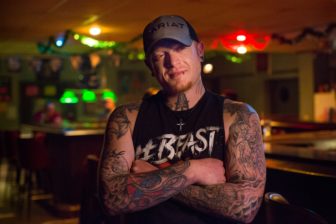 News outlets around the world were looking at America’s rural-urban divide, trying to understand how it affected the outcome of the election. “We recognized we had a really unique opportunity in line with what we were talking about doing, but now with a sharply focused lens,” Coester said. The next day, the college decided to launch 100 Days in Appalachia, with Coester as editor and creative director.

Marema is advising the site on regional coverage, while WVPB and the center are working closely to manage the site. That includes daily production duties, contracting with freelancers, generating story ideas and mining data to reach new audiences.

After kicking off with the story of a Muslim Appalachian woman with Kurdish roots, 100 Days has gone on to cover labor, immigration, energy, health and culture. David Mistich, digital editor/coordinator at WVPB, points to a recent freelancer’s piece that “hit on what we’re trying to do” by taking a nuanced view of a subject. The report from Pittsburgh described how a lack of cohesion among local activists resulted in two separate women’s marches on inauguration weekend.

Meanwhile, a series of photos titled 100 Days, 100 Voices, aims to present the diversity of voices in the region.

The project’s content appears on its website and social media, with some stories cross-posted to WVPB’s website. 100 Days also includes content from other public media stations, such as Ohio Valley ReSource, a CPB-supported Regional Journalism Collaborative covering economic and social change in Kentucky.

Part of the project’s aim is to reach an audience beyond Appalachia. WVPB and the center are examining website traffic trends to judge how stories play among far-flung audiences and to decide whether to boost posts on Facebook and Instagram. They’re also mining Facebook data to target audiences across political divides and zero in on regional pockets far from Appalachia that face similar issues, including Missouri, Texas, Michigan and southern California.

“We’re trying to take local content and make it meaningful for audiences elsewhere.”

WVU students are creating content for 100 Days and also working on curation, community-building and email newsletters. Their goal is to build an audience with an appetite for interpretive news and analysis from Appalachia that the partners can engage in long-term projects through newsletters and other forms of engagement.

Students in an audience-building class are doing “person-on-the-street” interviews and field research to determine media habits across different demographic groups. An ”innovator in residence” at the school will use that work to develop distribution strategies for social media.

“The audience is there,” Coester said. But the question mark is whether the 100 Days team will be able to meet the appetite for news from Appalachia “credibly and sustainably,” she said.

Meanwhile, North Country Public Radio in Canton, N.Y., started a “100 days” project in October with a callout asking listeners to describe their feelings about the election in three words.

The station received more than 150 responses, with moods ranging from depressed and disappointed to energized. Respondents ranged in age from 18 and 91 and spanned all the political parties represented on the ballot. The station used the information to create a word cloud. 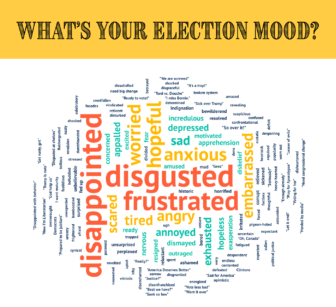 NCPR, which covers a rural area that voted for Trump, sought to keep the interest going after the election. It did another callout, this time asking listeners what they hoped to see happen during Trump’s first 100 days in office. Some were hopeful, while others feared how Trump might take action on his most worrisome campaign promises. The station created a spreadsheet of reactions and used it to generate story ideas for broadcast and a Tumblr, Trump: The First 100 Days.

The responses from listeners pushed staffers to report more deeply on the aspirations and thinking of Trump supporters in the region, a red spot in a solidly blue state. “It was like a political upset,” said Martha Foley, NCPR news and public affairs director. “We had a lot of reporting to do to learn about a variety of views in our region and bring those people forward and talk to them.”

Foley said the station has been trying to balance human-interest stories with reports on policy, such as how hospitals will survive if the Affordable Care Act is repealed and what will happen to the region’s flow of farmworkers who have entered the U.S. illegally should the administration approve stricter immigration policies.

Another crowdsourcing effort addresses President Trump directly on his all-hours medium of choice, Twitter. PRI is enlisting the audience of its shows The World and The Takeaway to suggest a question for Trump each day of his first 100 days in office, to be posed via the social platform.

Using the hashtag #100Days100Qs, users can tweet questions, record a message or send a voice memo through PRI’s app. PRI’s social media editor and senior manager of audience development sift through the suggestions along with other members of the editorial team. They nominate a question a day, and PRI.org Executive Editor Jonathan Kealing makes the final call on which question should be put to Trump.

#3. @realDonaldTrump: How does your clamp down on gov't communications square with your goal of returning gov’t to the people? #100Days100Qs

Kealing admits that it’s “highly unlikely” Trump will actually answer the questions. Regardless, PRI hopes the tweets will start a dialogue among the network’s audience, even if they’re not pegged to the issue of the day.

And so far, Trump has not responded.

Did we overlook a “100 days” project? Let us know with a comment, or email april@current.org.