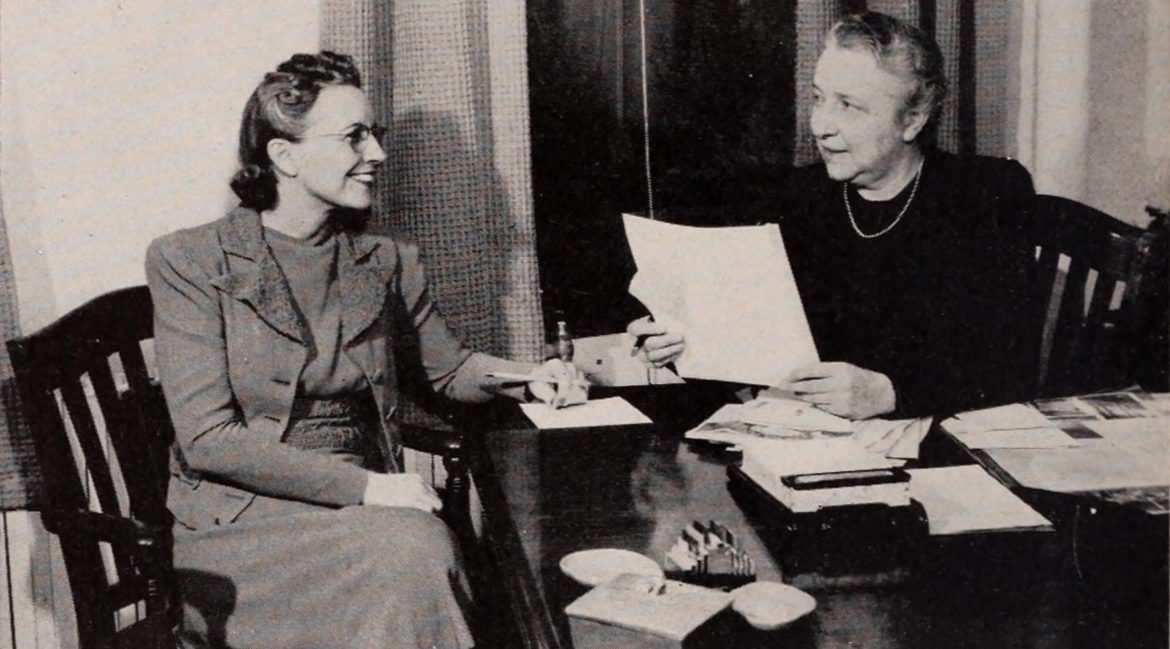 Judith Waller, right, with her secretary Grace Neuwerth in a photo from the August 1942 NBC Transmitter.

Judith Waller came upon her career in radio by happenstance. Waller described how in 1922 family friend Walter Strong, the business manager of the Chicago Daily News, invited her to work for his newspaper’s nascent radio station. She told him: “I don’t know what a radio station is, Walter, I don’t see how I could come and run it.” He said, “We really don’t know what it is either, but we have just decided to start one. Come in and we’ll talk about it.”

Like all practitioners of early radio, Waller was in an enviable but difficult position. Having no precedent or guidelines to follow, she was charged with creating programming to establish an audience on commercial radio. As she would later describe it, she found that she was interested in providing a public service by creating and airing programs that had the potential to educate and entertain listeners simultaneously.

In 1922 Waller worked with the University of Chicago and Northwestern faculty members to bring popular science, literature, and geography lectures to the newspaper’s station, WMAQ. To branch out with programs for all listeners, Waller worked to create programs with childcare advice and recipes for women working in their homes, educational health talks, and courses in foreign languages. In 1926 Waller agreed to air radio programs for a local elementary school, beginning with courses in art and music appreciation. At the height of its popularity, the program reached 275,000 school children.

Developing alongside commercial radio stations like WMAQ were dozens of educational stations connected to colleges and universities. These noncommercial stations were some of the earliest adopters and radio experimenters, linking urban and rural areas through university extension classes, agricultural information, and weather reports. However, finite space on the electromagnetic spectrum and the 1927 Radio Act pushed many of these noncommercial stations off the air in favor of radio’s growing commercial interests.

As a result of her success in the radio industry and her support of educational programming on commercial radio, Waller was uniquely qualified to bridge the sometimes incompatible goals of commercial and noncommercial broadcasting. Yet she became disillusioned with educational radio through her work on the commercial side. After taking on the role of educational director for NBC, she delivered a paper in 1934 titled “Achievements of Educational Radio” as part of the Fifth Annual Institute of Education by Radio. Waller asked radio managers who were scheduling educational programs whether they were sure that the public’s needs were being served and whether the size of the audience was commensurate to the expense of producing these programs.

Additionally, she felt that educators were not “radio-minded” enough to understand how to draw and maintain an audience. Waller also pointed to radio listeners, who said they wanted to listen to educational programming but who she suspected were actually listening to very different kinds of radio in their homes. She advised educators to collaborate with commercial radio in order to create the types of programs that could effectively educate and entertain.

Waller’s dissatisfaction with educational radio did not stop her from working to improve the types of programs she thought belonged on radio. In the 1940s she began writing books to train future radio professionals. It was in this new pedagogical role that Waller founded the NBC-Northwestern University Summer Radio Institute to train future radio personnel. After the program’s first year, Waller used her teaching materials to publish Broadcasting in the Public Service (1943), a short textbook meant to teach students about the radio industry and programming.

In its pages, she continued to advocate for collaborations on programming between educators and commercial broadcasters: “It is well to remember that the teacher knows the most effective teaching tools, just as the radio station knows the most effective broadcasting tools.” Waller praised the long-running current-affairs news program The University of Chicago Round Table, crafted through a partnership between WMAQ and faculty at the University of Chicago, as a prime example of the type of radio that could be achieved with “cooperation between education and industry.”

The new partnership between Sesame Street and HBO suggests that, though it may be difficult, we should focus on the positive outcomes that can be achieved by breaking through the divide between commercial and noncommercial media entities.

It was in Broadcasting in the Public Service that Waller began to detail the purpose of public-service broadcasting — that it should first “improve” the listener in order to “[render] a public service.” Waller and her employer NBC, in light of a 1940 report, NBC Interprets Public Service in Radio Broadcasting, had hoped that labeling such programs differently would attract new listeners and perhaps re-engage listeners who didn’t find enough entertainment in educational radio.

The phrase “public service” has been utilized to label many different kinds of programming throughout the last century within the U.S. commercial broadcast system and the state-chartered system in the U.K. Its origins in radio can be traced to Sir John Reith, who in 1925 delineated the British Broadcasting Corporation’s mandate to create and air programming with the primary goal of improving listeners. With its public-service mission, the BBC sought to provide what its programmers felt listeners needed, in the form of high-minded educational programming. Conversely, commercial broadcasters in the U.S. claimed to program what their audience wanted to hear.

Waller defined her programming philosophy somewhere in the middle of this. She felt that American broadcasters had to walk a fine line, providing programming that they saw as educational or in the service of informing the public. But such programming should not attempt to deliver high culture to the masses through a governmental mandate, as the BBC did. However, this philosophy created a fundamental tension. Waller aspired to give listeners what they wanted to hear, yet to a degree, she also had strong opinions about the types of programs she had spoken highly of over her career. That actually aligned Waller more closely than she acknowledged with the BBC’s stated public-service vision.

Waller enjoyed a long career in radio and published a number of books about improving educational and public service programming. However, it is difficult to analyze her career more fully because there are minimal traces of her in archives and historical scholarship. For example, it is difficult to know exactly how Waller wanted collaborative work to occur between commercial and noncommercial radio because she largely omitted details. She does communicate the struggles of creating public-service programming, of striking a balance between educating and entertaining, a challenge that continues to this day with programs such as Sesame Street. The new partnership between Sesame Street and HBO suggests that, though it may be difficult, we should focus on the positive outcomes that can be achieved by breaking through the divide between commercial and noncommercial media entities. Waller’s recommendation for collaborations reminds contemporary producers that the needs of commercial and noncommercial media need not be antithetical.

Amanda Keeler is an assistant professor of digital media in the Diederich College of Communication at Marquette University. Her research focuses on educational and public-service media, television genres and true-crime storytelling. Last year she guest edited with Josh Shepperd the November 2016 special issue of the Journal of Radio & Audio Media on the Library of Congress Radio Preservation Task Force.

This commentary appears as part of Rewind: The Roots of Public Media, our series of historical essays about public media created in partnership with the RPTF, an initiative of the Library of Congress. Josh Shepperd, assistant professor of media studies at Catholic University in Washington, D.C., and national research director of the Radio Preservation Task Force, is Faculty Curator of the Rewind series. Email: shepperd@cua.edu