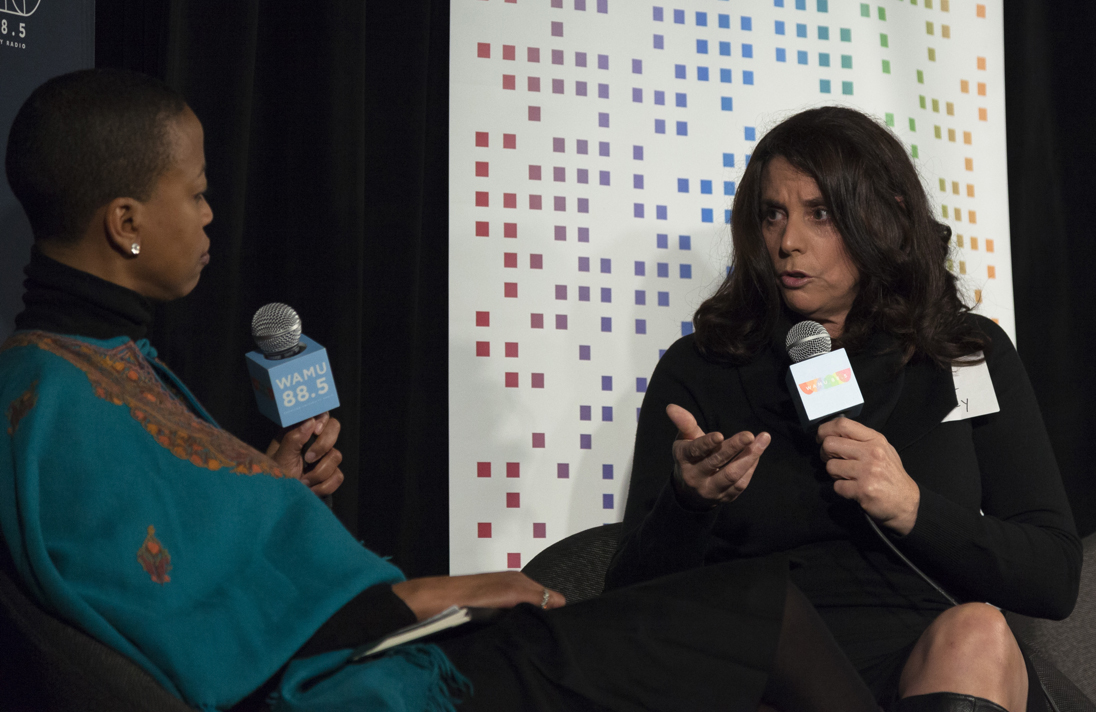 Rhea Combs, left, and Cheryl Chumley discuss their reactions to an essay on the American dream. (Photos: Christopher Baronavski/WAMU)

WASHINGTON, D.C. — Amid deepening political divisions across the U.S., a series of public micro-conversations between people of different experiences and sometimes opposing views aims to help build understanding around race and racism in America.

“Dear President: What You Need to Know About Race,” an event series created by New York’s WNYC, brings together unlikely pairings of speakers who respond to a collection of radio essays on black experiences with racism. WNYC began broadcasting the radio essays shortly after Election Day, followed by several live events that wrap up Saturday in Newark, N.J.

The series title asks the incoming president to listen to people of color, and is reminiscent of hashtags like #DearWhitePeople, also the title of a satirical movie, and #OscarsSoWhite. Both illuminate a divide in worldviews in which one speaker perceives the other just doesn’t get the lived experiences of those who are black.

“I have been trying to reach people, primarily white people, who think that they know already what race and racism is and what that conversation is about,” said Rebecca Carroll, event host and WNYC producer of special projects on race. 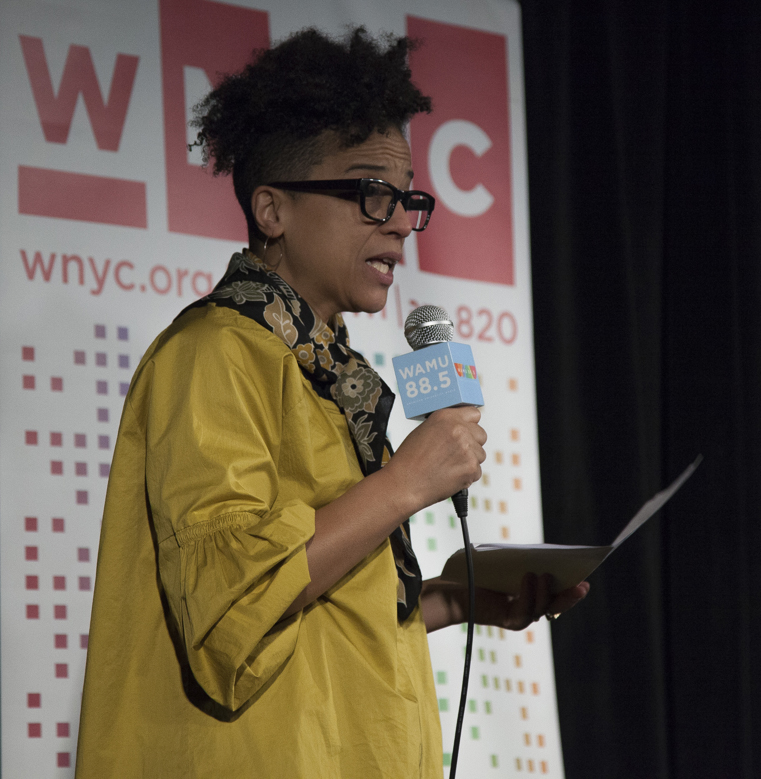 That includes Trump voters, who Carroll says “don’t quite know what they’re in for.” And yet the five radio essays were completed before the election. Essayists included influential black writers and a law student who was part of the “Jena 6,” a group of black teenagers who were convicted of beating a white student in Jena, La. in 2006.

Carroll admits that she assigned the essays thinking Hillary Clinton would win the presidency. She has been critical of Bill and Hillary Clinton and their history and involvement with black folks, but she saw the essay series as a way to frame civic dialogue about race under a new administration. “I at least felt that she would have an ear to issues and concerns around issues of racial justice,” Carroll said, referring to Hillary Clinton.

The first-person radio essays cover topics like the notion of black male hyper-masculinity, double-consciousness and homosexuality. Carroll describes them as offering deep truths on racism in America. The essays are “rooted in the black experience because racism at large is rooted in the black experience,” she said. Yet Trump’s election and rhetoric around people of color, immigrants, Muslims, Latinos and others, calls for a broader conversation, Carroll said.

During an event earlier this month in WAMU’s Black Box Theatre, a racially diverse audience of dozens of people listened to a radio essay on the American dream. Kirsten West Savali describes how she believed in the American dream when she left her home in Mississippi but then experienced the link between capitalism and racism firsthand. Rhea Combs, curator of the Smithsonian’s National Museum of African American History and Culture, and Christian columnist and author Cheryl Chumley took the stage to critique Savali’s argument.

The women disagreed on whether capitalism is a racist system and whether government has a role in leveling the playing field between rich and poor.

Chumley argued that government intervention creates a system of dependency, and said it was the role of charities and the private sector to help the disadvantaged. “I want to see everyone grow their own seed,” Chumley said.

“But if you don’t have your own farm, where is that seed going to be planted?” asked Combs, who said Chumley’s views failed to account for historical realities facing women, people of color, Muslims and others. What’s the function of government if not to provide systems that afford equal access and opportunity to all its citizens?

“Government’s role, in my view, is very limited, and that’s why our country is so great,” Chumley said. “It was based on the very radical notion at the time that our rights come from God, not government. …We’ve strayed from that, and we’ve strayed from all the good that’s come out of that.”

She added: “Some people come into the world with a lousier deal than other people, but I don’t think government is the answer for that.”

After spilling over the 12 minutes allotted for their conversation, Combs and Chumley wrapped up with an agreement: They share the hope that all will have the access and opportunity to pursue the American dream. After they left the stage, the audience listened to two additional radio essays on identities of color and racism and then responses from two other duos.

‘You want to keep hearing’

Carroll tested out the micro-conversation format last year for the launch event of There Goes The Neighborhood, a podcast about gentrification in Brooklyn. During a live event, actress Martha Plimpton, a newer resident of Crown Heights, conversed with a young black rapper who grew up in the neighborhood. Their exchange wasn’t combative, but each elucidated the other’s perspective.

“It’s really meant for the audience to feel like they’re listening in on a conversation between two people who just met.” — Rebecca Carroll, WNYC

“It’s really meant for the audience to feel like they’re listening in on a conversation between two people who just met, talking about something very serious,” Carroll said. “I think that’s what we need to do more of in our culture, in our country. If we did…, even if it was 8-10 minutes, there wouldn’t be such a giant chasm between people who think Trump is right for president and the people who don’t.”

The conversations could go in a number of different directions, Carroll said.

So far Carroll has received mixed feedback and some defensiveness about the series. While other panelists at the WAMU event shared their different experiences, they weren’t as far apart politically as Combs and Chumley.

“If they are more inclined to agree, but come from very different experiences and perspectives, that’s still interesting to me,” Carroll said. “The goal here is by no means to have three debates or arguments or divisive conversations.”

So, beyond the messages addressed to the nation’s new chief executive, who exactly is Dear President trying to reach?

“I’m trying to engage people who are at least somewhat curious and somewhat concerned about the state of America, and in particular the way in which race and racism has been the narrative thread of this country,” Carroll said.

The fourth and final Dear President event is this Saturday at the Newark Public Library. Free Press joins WNYC to ask, “What does the Trump presidency mean for people of color in Newark?”

Afterwards, Carroll may shape audio recordings of the conversations into some on-air form or podcast.