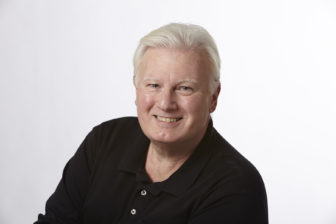 Rich Conaty, host of The Big Broadcast on WFUV in New York City for more than four decades, died Dec. 30 from lymphoma. He was 62.

“He was one of a kind,” said Chuck Singleton, WFUV’s general manager. “And very much an old-school radio pro to the end. It’s really a great loss, I think, for ’FUV, for listeners, for the art of the radio DJ.”

As a college student at Fordham University in 1973, Conaty took over a Sunday night program on the university’s WFUV and started The Big Broadcast. The show featured jazz and popular music, mostly from the 1920s and ’30s. Conaty often called it “a show for the old and the old at heart.” He hosted more than 2,200 shows.

Conaty loved all things vintage — the New York Times featured him in 2010 for his interest in classic cars, especially his 1950 Nash Ambassador Custom. “He was a man out of his time,” Singleton said. “But he also had a tremendous adaptability.”

The music on Conaty’s show was dated, even by the 1970s. Yet Conaty was able to introduce new generations to the music for more than four decades, Singleton said, because he “had the ability to make you understand that it was not just something sitting on a shelf in a museum somewhere or something that has been forgotten, but it was wonderful music that deserved to continue to be heard and discovered by new generations of people.”

“The Big Broadcast was a pretty unusual show, content-wise, over 35 years ago. It’s almost unique today,” Conaty said in 2010 on the station’s website. “I haven’t heard any other program that blends classic jazz with the pop vocals and dance bands of the same period.”

Rob Bamberger, host of a New Year’s Eve jazz show on WAMU in Washington, D.C., dedicated this year’s show to Conaty. “Rich and I held each other in high regard,” Bamberger said. “ … Who knows what comes after, but I have taken some solace in imagining the welcoming committee of fabled performers who would have received and embraced Rich Conaty at the gates yesterday afternoon and what a celebration they must have had last night.”

Conaty hosted his final live broadcast in September. The station has since been airing archived shows.