It’s late afternoon in central Indiana and you’re tuned to pubcaster WFYI-FM on 90.1 FM while navigating the I-465 beltway around Indianapolis, listening to All Things Considered local host Matt Pelsor tell you the traffic, weather and what’s coming up in the next block of the show.

As you take I-65 north for the hour-long drive to Lafayette, WFYI’s signal begins to fade past Lebanon, so you switch to Purdue University’s WBAA on 920 AM. And once again there’s local host Matt Pelsor — only now he’s reading public service announcements for greater Tippecanoe County. 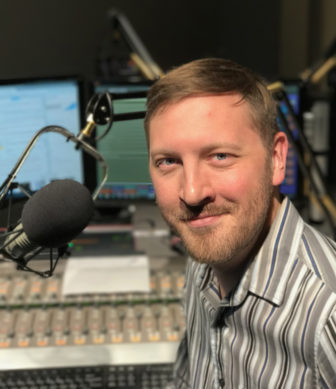 What’s going on here? In an experiment underway since last July, the two stations are sharing Pelsor’s services in an attempt to free up other staffers to do more local reporting and producing.

Working from WFYI’s Indianapolis studios each afternoon, Pelsor starts by recording a half-dozen station breaks for WBAA, including top-of-the-hour IDs, intros and outros for local features, and look-ahead promos for upcoming segments. Those segments are sent to WBAA by FTP and loaded into WBAA’s AudioVAULT automation system.

When the ATC broadcast starts at 4 p.m., Pelsor hosts live breaks on WFYI. Some of these are simulcast on WBAA using the statewide I-Light fiber system that links educational campuses around Indiana.

Listeners in Lafayette can’t tell that there’s nobody at the controls of WBAA’s studios,  which is exactly the way GM Mike Savage likes it. Because Pelsor is handling hosting duties from Indianapolis, WBAA reporter/host Sarah Fentem doesn’t have to be locked in the studio all afternoon. She’s able to do more local reporting for WBAA alongside her duties for Indiana’s statewide Regional Journalism Center.

“The whole point is to take that 40-hour-a-week person who would be the host, run the board and report in their spare time, to give them more time to report,” Savage says.

For WBAA the idea to share an ATC host started in 2015, when Savage found himself with a vacancy in that position. After hosting on an interim basis, Savage contracted with WFYI to provide daily voice tracks for a few months. (A third station, Indiana University’s WFIU, also shared some hosting services with WFYI and WBAA, but pulled out; Savage says there were stylistic differences in what managers at each station sought for an on-air sound.)

“That went on for eight months or so, and then WFYI also needed an ATC host, so now you had two stations with a need,” Savage recalled. After a national search, the stations found the voice they wanted locally, and brought Pelsor on-board last May.

Pelsor is a voiceover artist who also works for iHeart Indianapolis. Managers at both stations agreed he is a “major-market talent,” Savage said.

With Pelsor on-board, WFYI and WBAA then had to figure out how to make it all work.

Their goal was to be able to share at least some live content, such as regional weather forecasts and forward promos for upcoming ATC segments.

“The original work was for the two stations to line up their ATC clocks and see what we have in common and where we differentiated, and to see what we could align so that we had as few moving pieces as possible,” said Richard Miles, VP of interactive media and content strategy at WFYI.

In practice that means careful timing and coordination for Pelsor during each of his breaks, which all air live on WFYI. For part of the time, he’s heard only on WFYI, reading Indianapolis-exclusive content such as local traffic reports, underwriting or the WFYI call letters. At other times he presses a button that puts him on WBAA as well, using a generic ID of “your Indiana NPR station.”

“It seems complicated, but it took me a week, if that, just to get the buttons right,” Pelsor says.

There have been some bumps along the way. At least once early in the process, an Indianapolis-area emergency alert aired on WBAA when it should have been heard only on WFYI, according to Savage.

Overall, both Savage and Miles say they’ve been sufficiently happy with the project and are already looking at ways to expand it. For now, Pelsor is working as a part-timer, his $40,000 salary split evenly between WBAA and WFYI, with support from a Lilly Foundation grant.

“Having a little startup money from Lilly to help the stations have some space to think about how we can do things together was key,” Miles says. Both stations are now looking to bring additional partners on board around Indiana, with a goal of making Pelsor a full-time host with benefits, reducing the expense to each individual station and being able to make more use of Pelsor’s hosting skills.

While WFYI and WBAA seek expansion within Indiana, Savage says there’s been interest in the concept from pubcasters in other areas, too.

“I’ve had interest in the Southeast, interest in the Plains and the West,” he said. “When I’ve told them about this project, they’ve said, ‘Come to me when you’ve got this proved out and let me know how we can do this.’ They have the same concerns where they don’t have a host or they’re a small station and have too many resources invested in a host.”

Savage emphasizes, though, that his goal is not to simply cut costs but to make better use of WBAA’s five newsroom staffers, part of a paid staff that numbers barely a dozen.

Savage and Miles also hope that CPB will take interest in their project, perhaps providing funding for further expansion of the concept.

“CPB has a real interest in trying to maximize efficiency and to redirect resources to accomplish other goals within the building,” Miles says. “When we talked about this as a statewide group, it was about ‘I’ve got great talent sitting behind the mic and I’d love to get them into show-producing and out doing news.’” Both stations aim to have their reporters producing more feature pieces from the field using the time freed up from hosting ATC and other national shows.

Could the shared-host model expand into other dayparts? Savage says for now it’s a tough sell; he believes listeners want more local personality in the Morning Edition slot than during ATC. Differing schedules among stations in middays and at night make the concept more challenging in those hours, too.

At WFYI Miles sounds more ambitious: “ATC is the easier of the two, and the opening that worked for us was during ATC. But given the level of success we’re seeing with it — and that Matt’s not in my office sweating bullets — we could take this to the next level,” he says, leaving open the possibility of testing shared-hosting of ME eventually as well.