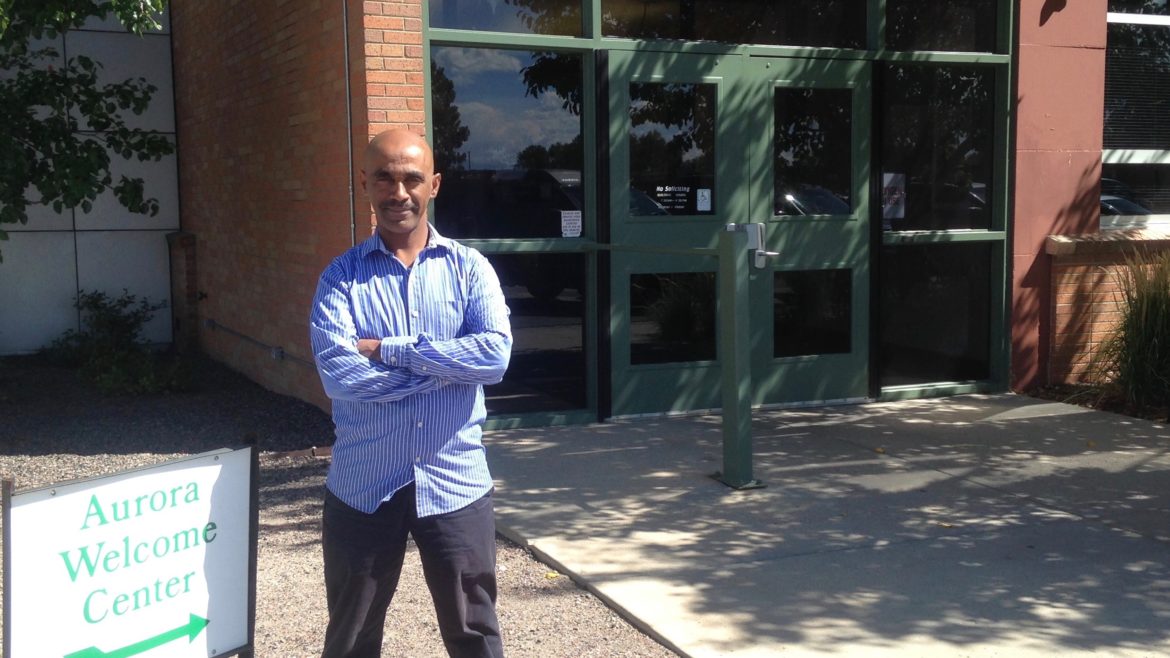 AURORA, Colo. — The walls of the Aurora Welcome Center bear photos of immigrants to this Denver suburb, their stories on placards alongside the pictures. Endale Getahun wants their voices heard on the radio, too.

During a visit to this center dedicated to integrating immigrants into Aurora life, Getahun points to a room that he hopes will one day be the studio for his own low-power radio station, KETO. Himself an immigrant from Ethiopia, Getahun makes a living from his airport transportation business. But he also has an extensive background in media production and a belief in the power of radio and television to help his fellow immigrants.

“Our mic is open to any immigrant community,” he says of KETO. “This is what low-power FM is.”

Getahun, who came to the U.S. in the mid-’80s, now lives in a community where one in five residents has arrived from outside the U.S., according to 2010–14 Census data — double the statewide proportion of immigrants. His vision is of an LPFM station that would serve Aurora’s immigrants by connecting them to each other and to local, state and federal agencies that can help them navigate their new lives in America.

After showing me the hopeful future home of KETO, Getahun and I took a short walk down a wide street and found a donut shop where we could chat. He bought an apple fritter but left it largely untouched as he eagerly discussed his past work in media and his plans for KETO. The call letters come from the Amharic for “from Ethiopia,” “ka Ethiopia.”

“Our mic is open to any immigrant community. This is what low-power FM is.”

Getahun said he was growing up in the U.S. in the ’80s when he first grasped the power of the media. He was happily surprised when televised fundraisers aimed to raise money for victims of famine in his home country.

“It was a teaching moment for me, how media can be important and change people’s minds, teach them, inform them,” Getahun said.

He went on to learn audio and video production and to work in public and public-access TV. When he lived in the Washington, D.C., area, he produced a public TV show about Ethiopian news and issues for the city’s large community of immigrants. “It was the hottest show,” he said. “I had a lot of audience.”

But the desire to be closer to family brought Getahun back to Aurora, where cheaper housing and good schools attract immigrants looking for a home. Some are also resettled to the area by government programs.

Support that means more than dollars

Getahun already has a voice on Denver’s airwaves as host of an African music show on community radio station KGNU in Boulder. But few other media outlets in the area serve the multilingual audience he plans to pursue.

KETO will broadcast programming in a variety of languages and promote job fairs, English classes and government services. Listeners may also hear city council meetings and call-in shows with police chiefs and the mayors of Denver and Aurora. High-school students could contribute shows directly from their classrooms.

Getahun hopes to get the station on the air in coming months, and he’s getting help from Aurora officials. The city council voted Oct. 10 to give KETO $7,000. The school system has agreed to host KETO’s tower on a building and to give Getahun the studio space at the Aurora Welcome Center that he showed me.

“The overwhelming support for the project, in my opinion, means much more than the dollar amount,” said Debi Hunter, community engagement advocate for Aurora Public Schools and a former city council member. “It’s a great opportunity for the community, the city, the school district, everyone to work collaboratively in reaching our refugee and immigrant communities.”

Meanwhile, current council member Charlie Richardson has called KETO a “priority project,” noting an opportunity to take on radicalization within immigrant communities. “A platform for disseminating timely and accurate news will go a long way to discount dangerous rumors that create discontent,” he said.

“Low-power FM is very small,” Getahun said. “But it’s huge for us.”