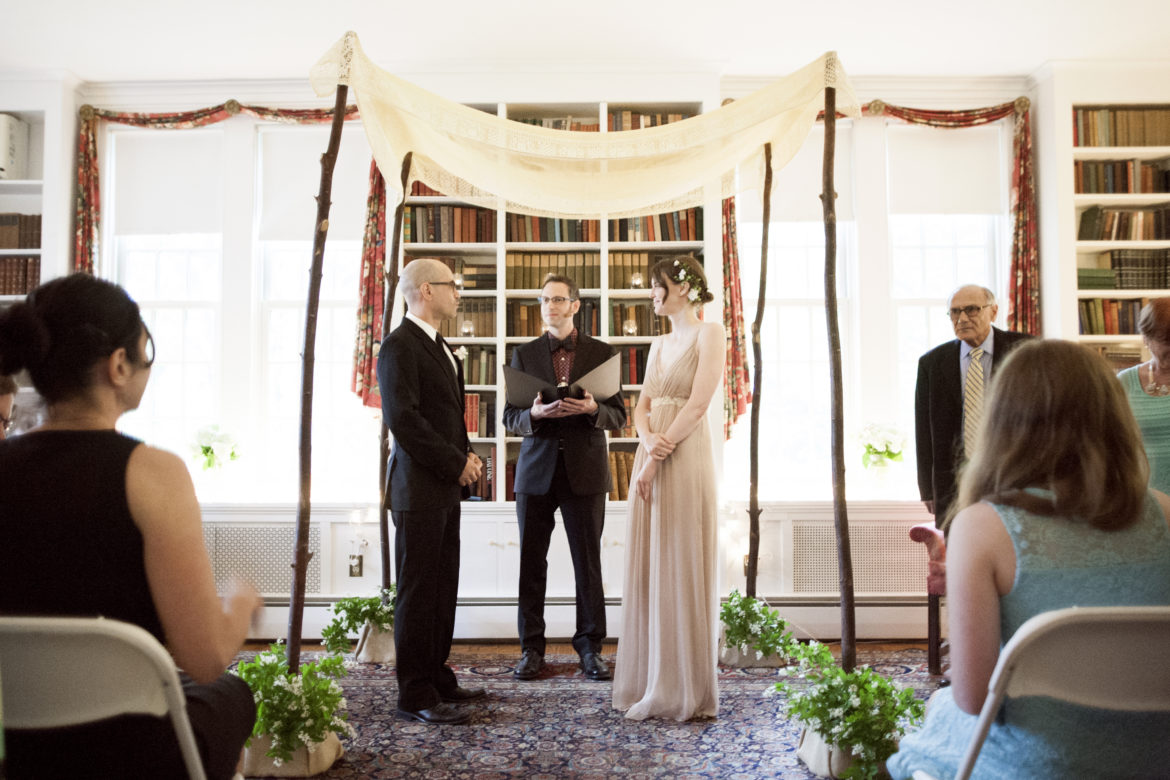 Radio producer Sean Cole, center, presides at the wedding of Jonathan Goldstein, left, and Emily Condon. (Photo: Within This Day)

This American Life’s Sean Cole is a published poet who has produced audio pieces about his love of poems. He has another interesting sideline that employs his abilities as a poet and radio producer: As an Internet-ordained clergyman, he has married 19 couples over the last 15 years.

Most of these lovebirds have at least one member who is or was gainfully employed in public radio. Each of the couples continue to live in wedded bliss today.

“I only do it for dear friends,” Cole told Current. “I couldn’t do it for someone I didn’t know, or someone I wasn’t really close to. I wouldn’t know what to say.”

Prior to joining This American Life as a producer three years ago, Cole had worked at several of public radio’s top producing organizations — WBUR in Boston, where he started as a newsroom intern; American Public Media’s Marketplace; the CBC and WNYC’s RadioLab. At 44, he’s not married himself but finds special joy in uniting couples in matrimony, channeling his writing abilities into leading wedding ceremonies that are uniquely personal and funny.

Imagine a wedding at a misty, windswept location overlooking the Pacific Ocean in California, where the loving couple stands before their families and friends. As the presiding minister, Cole turns to the groom to ask, “Will you take this splendiferous, magnanimous, hilarious whip-smart beauty to be your lawfully wedded wife?”

His question for the bride: Will you take this “opulently bearded … huge-brained goofball cutie” as your husband?

Cole gestures in joy as Shapins, center, and Oehler tie the knot after a six-year engagement.

The “whip-smart beauty” in this 2014 wedding was Kara Oehler, whom Cole met in 2002 when they were on a panel together at the Third Coast International Audio Festival. As an indie producer, Oehler had reported for Morning Edition, Marketplace, RadioLab, Studio 360 and Hearing Voices. She married Jesse Shapins, a.k.a. the “goofball cutie,” her partner in co-creating interactive documentaries and platforms such as Zeega and GoPop.

At the time of the wedding, the couple had been engaged for six years. Cole began the service by declaring, “Finally!”

He got even more laughs when he declared “by the power vested in me by the Universal Life Church of Modesto, California.”

Cole grew up in the Unitarian Church but got his credential to officiate at weddings through the Universal Life Church, which makes it easy and cheap.

On the suggestion of George Hicks, a WBUR engineer, Cole pursued ordination by visiting the church’s website, where he found a button that said, “Click here to be ordained.”

Cole has met other Universal Life Church ministers all over the place.

“You’ll be at a dinner party and it’ll be like, ‘Universal Life Church? Me, too!’ And we’ll fist bump.”

Cole became ordained in 2001, when he was tapped to officiate the wedding of two WBUR colleagues, reporter Jason Beaubien and editor Jenny Schmidt. Four days after 9/11, a crazed time for journalists to be away from the newsroom, they exchanged vows on a small island off the coast of Maine. (Both Beaubien and Schmidt now work at NPR.)

After officiating at the Beaubien-Schmidt wedding, Cole felt “drunk with a kind of feeling that I had this power to unite people. But it was also such a beautiful feeling to do that, I wanted to do it more and more.”

And he did. Cole has married a total of seven couples with connections to WBUR, including Mitch Wertlieb, who worked at the station before signing on at Vermont Public Radio as anchor of Morning Edition. Gabe O’Connor, formerly on the team at WBUR’s Only A Game, tapped Cole to officiate when he married his wife Becca. O’Connor is now a producer of NPR’s All Things Considered in Washington, D.C.

Cole’s MO is the same for all the weddings. He tells a story of how the couple met, their courtship or the marriage proposal, and writes insightful lines about them, such as “whip-smart beauty” and “goofball cutie.” Most couples write the vows to be recited before Cole pronounces them “wife and husband.”

Cole officiated at weddings of many of his former colleagues from WBUR, including Ashley Ahearn. (Photo: Kate Fromhagen)

These couples recognize that Cole’s not good at “the God stuff,” as he says. Often Cole includes a blessing for the couple in the form of an original poem he writes, sometimes on the day of the wedding. There are several wedding pictures of him looking like he just scored a goal at a soccer game with his hands outstretched and the newlyweds kissing in front of him.

“Over the years I’ve thought a lot about what a wedding day is for,” Cole said. “There’s a kind of real-world sorcery to standing up in front of your world of familiars, your tribe, your family by blood or your family by choice. There’s a point to it.”

One of Cole’s favorite wedding memories is of presiding over the marriage of Jonathan Goldstein and Emily Condon, one of four couples with connections to TAL whom he married. Cole played a matchmaking role in this one.

When Condon, production manager for TAL and Serial, invited Cole to a small dinner party, Cole asked if he could bring Goldstein. Cole had worked with Goldstein on CBC Radio’s Wiretap, a show in which he played or improvised fictitious characters. At the time of the dinner party, Goldstein was visiting New York City from Montreal.

Goldstein and Condon hit it off, and nearly two years later they decided to get married. “It only seemed appropriate to ask Sean to marry us,” said Condon.

Cole interviewed Goldstein and Condon together and individually before he wrote his portion of the ceremony, a technique he employs for all his weddings.

“He brought along this big loose-leaf binder and took notes. He was very studious about it,” said Condon.

At their June 2015 wedding, Cole read emails that Goldstein and Condon had sent to him during the early days of their courtship.

“It was like one of his radio stories in which you are the characters,” recalled Goldstein, who now lives in Brooklyn and produces the Heavyweight podcast for Gimlet Media. “We felt very lucky to have him do our wedding.”

Cole also officiated at the wedding of Michael Murray and Ashley Ahearn, who had been Cole’s intern at WBUR before she went off to work at Living on Earth. The couple met soon after Ahearn took a job as an environment reporter at KUOW in Seattle. When they got engaged, Ahearn says she told Murray that long before she knew who she would marry, she knew Cole was going to do the wedding.

For Ahearn and Murray’s big day in Olympic National Park, Cole used excerpts from an interview Ahearn did with her husband to be.

“Sean describes people and understands people,” Ahearn told Current. “This is what he does for a living, and I can’t think of a better place to apply those skills than at a wedding.”

Next year Cole will officiate at the Canadian wedding of a CBC Radio producer. Cole is hoping his ordination in the Universal Life Church passes muster in the Great White North.

Might Cole be tying the knot himself any time soon?

“Someday I’d like to write my own vows and say them out loud in front of other people,” Cole said. “And hopefully there’ll be someone standing up there at the altar with me.”

Correction: An earlier version of this story mischaracterized how Cole and Kara Oehler met. They were on a panel together at the Third Coast International Audio Festival but did not produce a ShortDoc together.