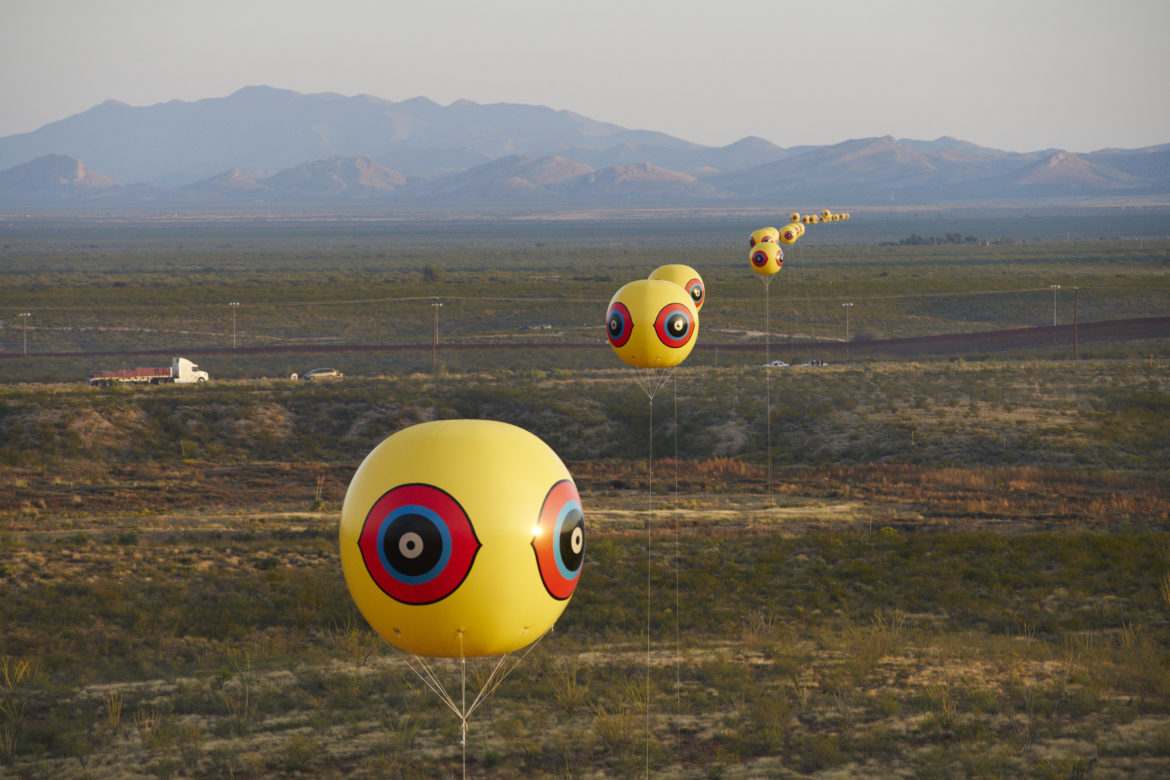 When filmmaker Sam Douglas heard about a 2-mile-long art project that would bisect the border between America and Mexico but exist for only three days, he immediately wanted to capture its creation.

Douglas was already working on a documentary about land–art installations. He had filmed Robert Smithson’s famous “Spiral Jetty,” a graceful earthwork sculpture at the edge of the Great Salt Lake in Utah; the whimsical “Cadillac Ranch” of half-buried cars in Amarillo, Texas; four huge “Sun Tunnels” that interact with sunlight in the Utah desert; and “Double Negative” near Overton, Nev., consisting of two massive trenches created by the displacement of 244,000 tons of rock.

But Douglas was looking to capture construction of a contemporary project, “so I could document the process of pulling off such herculean efforts,” he said.

His co-director, Comanche filmmaker Julianna Brannum, told him about “Repellent Fence/Valla Repelente,” which was in process by the Native American art collective Postcommodity. Three artists, Raven Chacon, Cristóbal Martinez and Kade L. Twist, ultimately spent eight years building relationships on both sides of the border to enable them to place the piece in 2015.

The installation featured a line of 26 helium balloons, each 10 feet wide, festooned with an ancient indigenous eye symbol; smaller balloons with the same image are sold commercially as bird repellent. The trail of balloons, tethered to bob 50 feet off the ground, became “an ethereal band of floating eyes stretching for 2 miles,” Douglas said. Through the Repellent Fence follows its construction from both sides of the border.

The artists’ statement explains that the piece symbolized “a suture” that stitched together the peoples of the Americas, “symbolically demonstrating the interconnectedness of the Western Hemisphere by recognizing the land, indigenous peoples, history, relationships, movement and communication.”

Douglas’s hourlong film tells “a stunning story with layers and layers of history and meaning behind it,” said Shirley Sneve, executive director of co-producer Vision Maker Media, “particularly now that the border wars are so violent.”

Douglas grew up in Texas, so he was especially aware of border issues. “I always felt conversations about the border were very two-sided, not multidimensional,” he said. “This art piece brought a lot of things to the fore.”

Humans have traversed the continent from Central America up through Canada for thousands of years, Douglas noted. “Issues don’t stop at a border,” he said. “This is about the larger culture. It’s starting a conversation about giving voice to the people who have gone back and forth. It’s shifting perceptions of the border and the people who live near it.”

The filmmaker is drawn to Native American subjects. He co-produced LaDonna Harris: Indian 101, profiling a Comanche activist, with Brannum and executive producer Johnny Depp. That documentary aired on PBS in 2014 and repeated this year. “LaDonna opened up a whole world of Native advocacy and civil rights,” Douglas said.

Filmmaker Sam Douglas shoots one of the 26 balloons 50 feet off the ground in the art installation “Repellent Fence/Valla Repelente.” (Photo: Sam Douglas)

Douglas began actively working with the Postcommodity artists in 2014. “They were meeting with stakeholders like the U.S. Border Patrol, mayors on both sides of the border, governments, schools, civic groups — just to get everybody onboard with the project,” he said.

Such massive artworks “aren’t just beautiful metaphors,” Douglas said. “They’re about the relationships it takes to pull them off, the conversations that grow out of that cooperation and the common bonds people find by doing the work.”

Much of the film focuses on 10 days of construction of Repellent Fence/Valla Repelente. Douglas needed two full crews to capture the work in the U.S. and Mexico.

“Our vans constantly got searched going back and forth across the border,” Douglas said. When people around the crossing point learned more about the film, “they were so captivated, they offered to help us out.”

The sheer size of the installation posed challenges. Filming took place in dry, desolate ranchland outside Douglas, Ariz., and Agua Prieta, Sonora. Douglas ended up splitting the cost of a drone camera with Postcommodity to capture the entire length of the miles-long installation.

In addition to footage of the construction and other land–art installations, the documentary features interviews with Matt Coolidge, founder of the Center for Land Use Interpretation, a nonprofit that explores human interaction with the surface of the planet; artist Stanley Marsh, now deceased, who collaborated with the art group Ant Farm on “Cadillac Ranch”; and internationally known critic Lucy Lippard, author of 21 books on contemporary art.

The film is currently in postproduction. Douglas hopes for an air date next year.

“We’re still figuring out the title,” he said. Douglas and his team are brainstorming over just the right words — poetic, informative and clever.

“It’s difficult to figure out what to stamp on a movie for eternity,” he said.