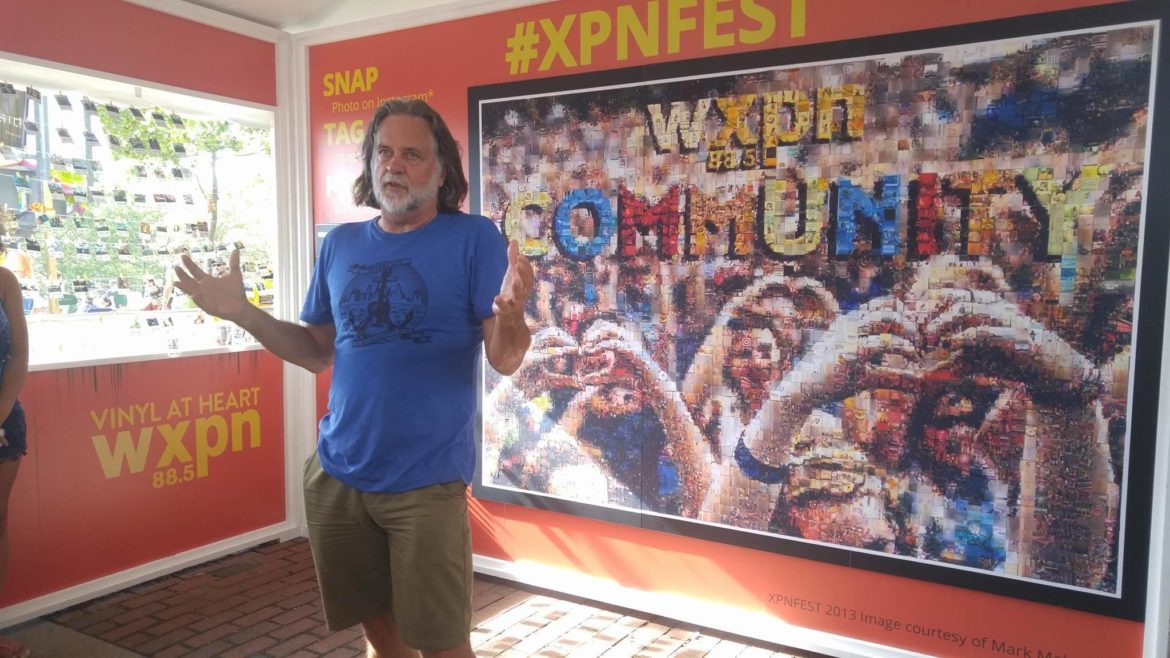 Roger LaMay, g.m. of WXPN, talks in front of a mural created with the Instagram images of WXPN music festivalgoers. (Photo: AlexanderMackle/Wikimedia Commons)

Relationship experts often advise keeping your partner happy to keep them around, especially in a new relationship.

By taking a similar approach to courtship with its listeners, Philadelphia’s WXPN has crossed the threshold of 30,000 donors, including 21,000 sustaining members who provide regular monthly donations to the station.

WXPN was already increasing its sustaining memberships when Carissa Ciuca, director of individual giving, joined the station two years ago. But recapturing — keeping members on board even after their current credit card expires — wasn’t as strong.

“That is, in my opinion, equally important to keeping your sustainers around,” Ciuca said. Make them feel appreciated — otherwise, they’ll disappear.

Like so many other stations, WXPN has been focusing on acquiring sustainers. In fiscal year 2012, sustaining memberships represented just 15 percent of the station’s total memberships. But WXPN began a bigger push for sustainers the next fiscal year and more than doubled its sustainers, to 34 percent.

The refocusing paid off. Sustaining memberships continued to climb. By the end of its fiscal year June 30, sustainers made up 71 percent of the station’s total membership base. The station’s overall membership grew 11 percent over two years, Ciuca said, and WXPN reached its goal of 30,000 members.

WXPN enjoys a sustainer rate well above average among large stations, according to a Greater Public study of 97 public radio stations. Among large stations in fiscal year 2015, 45 percent of donors were sustainers. WXPN’s membership base was 67 percent sustainers that year.

Ciuca points to three methods that helped WXPN achieve these gains: Make your goals transparent, involve members in the station’s success, and develop a marketing and awareness campaign.

In 2014, a multiplatform marketing campaign featured on billboards and buses took aim at online music services like Pandora and Spotify. The “Vinyl At Heart” campaign used taglines like “Curated, Not Encoded,” “Rhythms, Not Algorithms” and “Community, Not Commodity.”

Members in quarterly focus groups told WXPN that they felt a connection with the campaign. “We found that it resonated with our members and how they felt about themselves as music lovers,” Ciuca said during a panel about music-station fundraising Aug. 11 at the Public Media Development and Marketing Conference in Boston.

The effort began as a campaign to build brand awareness and has become part of WXPN’s identity. “Our mission is to connect artists with audiences,” Ciuca said. “Our members feel like they’re a unique tribe of music lovers.”

The station enlisted members in its success by asking them to tell friends about the goal to reach 30,000 members and to post updates to social media.

In addition, it tabled at community events and made a point to follow up with people afterwards by email and direct mail. It also focused pledge drives on acquiring new members — WXPN hosts pitch only monthly giving levels — and improved the quality of its premiums by offering higher-quality T-shirts designed by a local designer.

“Toward the end of the fiscal year, it was very tight,” Ciuca said. “We were counting each and every person as they came in.”

Along the way, WXPN was transparent about its goals, which Ciuca said helped members feel like they’re part of a community. It created a countdown page on its website, and hosts and station messaging focused on explaining the goal’s importance. The station sees its supporters as ambassadors and helpers in its success, Ciuca said.

After WXPN reached its goal, it created a mosaic out of Instagram images of its supporters, which it displayed at its summer music festival in July.

About 77 percent of new members joined as sustaining members in fiscal years 2015 and 2016, making it easier to keep them on board, Ciuca said. WXPN’s member retention rate was 81 percent last year.

To keep relationships with donors going, the station has aggressively pursued donors who are up for renewal or whose credit cards decline a payment.

A donor up for renewal receives seven letters by mail — and WXPN is adding an eighth letter soon. Mailings begin a few months prior to the renewal date and continue a few months past the date if no renewal comes. Donors also receive email reminders if they don’t respond to the mailings, and membership is promoted on-air.