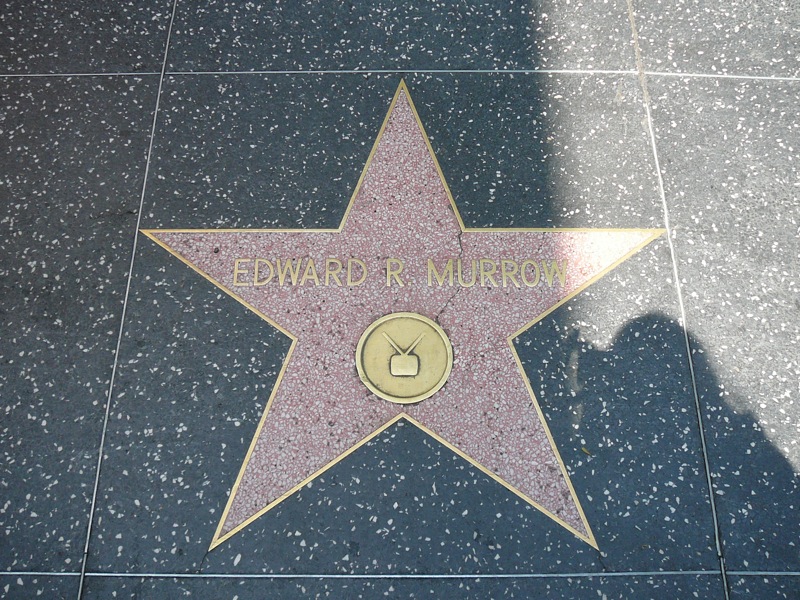 Edward R. Murrow on the Hollywood Walk of Fame (bsoist/Flickr)

Murrow’s star on the Hollywood Walk of Fame (Photo: bsoist/Flickr)

Among large online news organizations, NPR and ProPublica won in news series (audio) for “Insult to Injury: America’s Vanishing Workplace Protections.” NPR also won among network radio organizations for investigative reporting, news series and writing. This American Life took home a news documentary award and, with Chicago’s WBEZ, a continuing coverage award. Other winners include KQED and the Food & Environment Reporting Network for use of sound.

The Center for Investigative Reporting won five awards in the small online news organization division, including for overall excellence and, in the video division, continuing coverage, feature reporting, news documentary and website. Other winners include WUSF in Tampa, Fla., for website (audio); The GroundTruth Project for use of video; and the Texas Tribune for news series (video).

Public media outlets took home nine of 13 awards in the small market radio division. WITF in Harrisburg, Penn., won in hard news reporting for ”Heroin: A Life Lost” and use of sound for ”The Outhouse Races”; Arizona Public Media won in news documentary for ”Divided by Law”; and Marfa Public Radio in Marfa, Texas, won for investigative reporting on ”Towns On Path Of Proposed Mexican Pipelines Suffer Rash Of Violence”.

Eleven out of 13 winners in large-market radio came from public media, with some stations winning multiple times. Minnesota Public Radio won for overall excellence; WAMU in Washington, D.C., won in hard news reporting for “How the Pro-Bowser FreshPAC Was Forced to Disband” and in investigative reporting for  “Assault on Justice”, a collaboration with Public Radio Exchange, the Center for Investigative Reporting, and the Investigative Reporting Workshop at American University.

Boston’s WBUR won in feature reporting for “She Remembers It All” and in writing for “Tsarnaev Relatives Take Stand in Emotional Day of Testimony”, and WLRN in Miami won in news series for “The Migration Maze” and in sports for “Shark Attack On The Beach! Footvolley’s Popularity Taking Off in Florida, the U.S.” Other winners include Michigan Radio for news documentary, WNYC in use of sound and St. Louis Public Radio for website.

Murrow Awards are presented in 13 categories. RTNDA said it received more than 4,300 entries in another record-setting year for submissions.

Visit the awards page for a full list of winners.