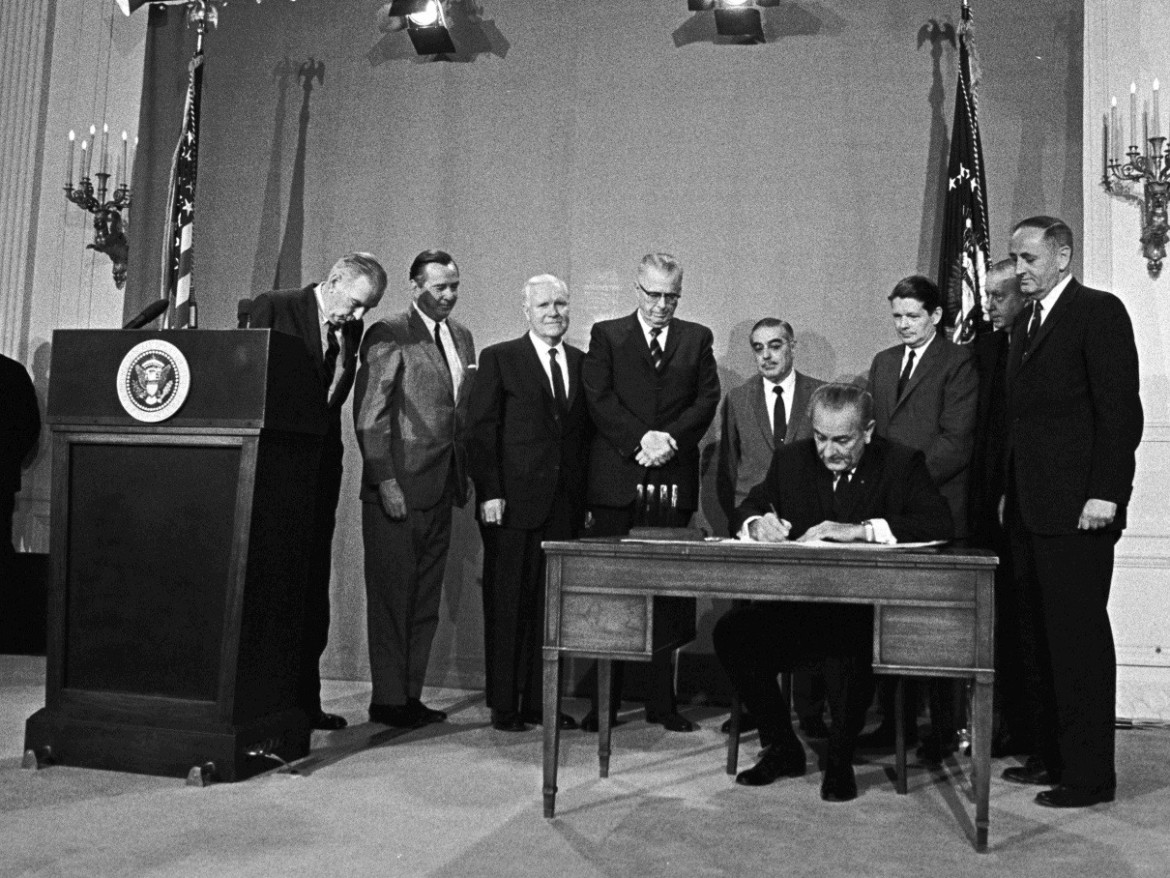 President Lyndon B. Johnson signs the Public Broadcasting Act of 1967 in the East Room of the White House. (Photo: Yoichi Okamoto, LBJ Library)

This commentary introduces “Rewind: The Roots of Public Media,” a new bimonthly series created in partnership with the Radio Preservation Task Force, an initiative of the Library of Congress. Throughout the series, scholars of media history will look back at both familiar and lesser-known chapters in the evolution of public broadcasting. For our first essay, Robert K. Avery, professor emeritus in the department of communication at the University of Utah, examines the legacy of the Public Broadcasting Act as it approaches a significant milestone.

Nov. 7, 2017, will mark the fiftieth anniversary of the Public Broadcasting Act of 1967, arguably the most significant piece of U.S. communication policy legislation of the second half of the 20th century.

The Act created CPB, and subsequently the establishment of PBS and NPR as the national distribution networks for public television and radio. The relative success or failure of this landmark law has been a subject of numerous books and articles over the past five decades, and the importance of what the legislation did and didn’t do continues to receive fairly regular scholarly attention.

Unlike in Great Britain, where Parliament awarded a Royal Charter and guaranteed financial support to the BBC in 1927, thereby ensuring a strong national public service broadcasting system, Congressional leaders in the United States had forged a broadcasting system that became the product of commercial free enterprise. The Radio Act of 1927 and then the Communications Act of 1934 created the blueprint for a market-driven broadcasting service that delivered audiences to advertisers.

Although this early legislation acknowledged that the airwaves were a public resource and that broadcasters had a responsibility to perform in the public interest, the FCC — the federal agency that was to be the standard-bearer and watchdog for the American public — did little to ensure that broadcast stations would operate as a public trust. To the contrary, the FCC routinely renewed licenses without any expectation that radio and television programming would do anything more than entertain listeners and viewers. So, while broadcasting became part of the cultural and educational fabric of British society, in the U.S. it became escapist dribble that was wrapped around commercial messages for soap and toothpaste.

To the FCC’s credit, there were frequencies set aside for “noncommercial educational” radio in 1945 and television in 1952. But creating spectrum space for stations dedicated to providing a meaningful informational and educational programming service to the American public without the associated funding to make it happen was a sure formula for failure.

The struggles of noncommercial radio and television broadcasters to keep their stations on the air are legendary in the annals of American broadcast history. For example, when the Federal Radio Commission was created by the Radio Act of 1927, a total of 94 educational institutions held broadcast licenses, but by 1931 that number had shrunk to 49. When Congress had the chance to change the pro-commercialism climate by reserving 25 percent of all available radio channels for noncommercial educational use in 1934, it failed to do so.

The pattern of protecting commercial radio interests at the expense of educational institutions was continued by the newly created FCC that regularly sided with commercial ownership of licenses in comparative hearings. And when it came to television allocations, the table of assignments released in 1952 placed the vast majority of noncommercial educational television assignments in the UHF band at a time when TV sets only had VHF reception.

Had it not been for the Ford Foundation and a handful of other philanthropic organizations, these broadcasting pioneers would have never survived. Their programs were generally low-budget productions that could hardly compete with the slick shows of commercial broadcasting. What was needed was a way to catch the attention of federal lawmakers and to help them recognize that commercial television and radio would never sacrifice large audiences in the name of quality programs that were designed to educate and inform rather than simply entertain. There needed to be a national structure and support system to enable educational stations that were forbidden to broadcast commercial messages to prosper alongside their commercial counterparts.

Origins of the Act

That the Public Broadcasting Act was signed into law in 1967 was the result of a combination of idealism, timing, behind-the-scenes political maneuvering and more than a little bit of good luck. As a successful owner of broadcasting properties in Texas, Sen. Lyndon Johnson had supported an effort to fund educational television facilities through the National Defense Education Act in 1958.

After the assassination of John F. Kennedy, Johnson moved from his Vice President position to the White House. America’s love affair with JFK was strong, and Johnson was determined to make his own unique mark with what became known as his “Great Society” programs.

The timing was right for educational television advocates to get the attention of Johnson and to position this enterprise as a Great Society program that was consistent with the President’s vision for moving America forward. Following a special conference on long-range funding for educational television in December of 1964, ETV leaders approached the prestigious Carnegie Foundation to create a blue-ribbon Carnegie Commission on Educational Television. This Commission studied educational television for more than a year and issued the monumental report, Public Television: A Program for Action. Johnson was impressed with the report’s recommendations and called on Congress to create legislation that would bring them to life.

A copy of the Public Broadcasting Act, part of the Dean Coston Papers at the University of Maryland. (Photo: Josh Shepperd)

The political maneuvering began in earnest, and with the addition of educational radio to the proposed legislation, identical bills (S. 1160) moved with remarkable speed through both houses of Congress. At the Nov. 7 signing ceremony in the East Room of the White House, President Johnson spoke eloquently about the significance of this new law (Public Law 90-129). He placed it in the context of Congressional support for the construction of the first telegraph line in 1844 and the 1862 Morrill Act that set aside lands in every state to create a national system of land-grant colleges. He invoked recollections of the old Greek marketplace where public affairs took place in full view of the entire citizenry, and he promised that this new system of public broadcasting would belong to all the people.

Shortcomings of the Act

For all the lofty rhetoric that accompanied the historic signing ceremony, the legislation that was moved into law that day had several significant shortcomings that have nearly destroyed U.S. public television and radio during the past five decades. The Carnegie Commission had envisioned that CPB, created by the Act, would be governed by a nonpartisan board of directors that would serve as a political heat shield, guarding the new enterprise from congressional or White House meddling. Instead, the Act mandated a fifteen-member board of presidential appointees that essentially guaranteed that partisan politics would become inevitable, with the winds of influence changing directions with each shift of administration.

A second major flaw that critics worldwide have repeatedly recognized is omission of the funding mechanism envisioned by the Commission to provide insulated long-range financial support. Unwilling to hand public broadcasters a blank check in the form of a guaranteed trust fund generated by an excise tax on television sets, Congress instead forced public broadcasting to conform to the annual budgeting and appropriation process. The result has been a continuing struggle to secure adequate funding year after year after year.

Without that guaranteed financial support, public broadcasting has been forced to engage in funding practices that have prompted sharp criticism. Since programming follows the money, public television and radio have been forced to attract corporations, foundations and upscale viewers and listeners with programs that are mainstream in content and ideology. The vision of public broadcasting serving highly diverse and underprivileged audiences has not been fully realized, to the obvious disappointment of vocal critics.

Significance of the Act

While the Public Broadcasting Act of 1967 failed to clearly articulate a mission and provide adequate financial support for America’s alternative noncommercial educational broadcasting system, it has succeeded in bringing high-quality radio and television programs to U.S. audiences that would not have been possible otherwise. The creation of CPB and the national distribution networks for public radio and television allowed the alternative system to become a distinctive voice in American culture.

The public broadcasting system enabled by the 1967 Act should always be subjected to critical scrutiny and evaluation, and undoubtedly some critics will always find it wanting. But without an alternative broadcasting system that is outside the grip of market forces and the straitjacket of commercialization, our nation could well be heading for a “1984” that even George Orwell didn’t imagine.

Given such award-winning programs as Frontline, Independent Lens, Moyers & Company, Washington Week in Review, Charlie Rose and American Experience, to name but a few, some future historians could very well conclude that the 1967 Act was one of the most important factors of the 20th century in the preservation of U.S. democracy.