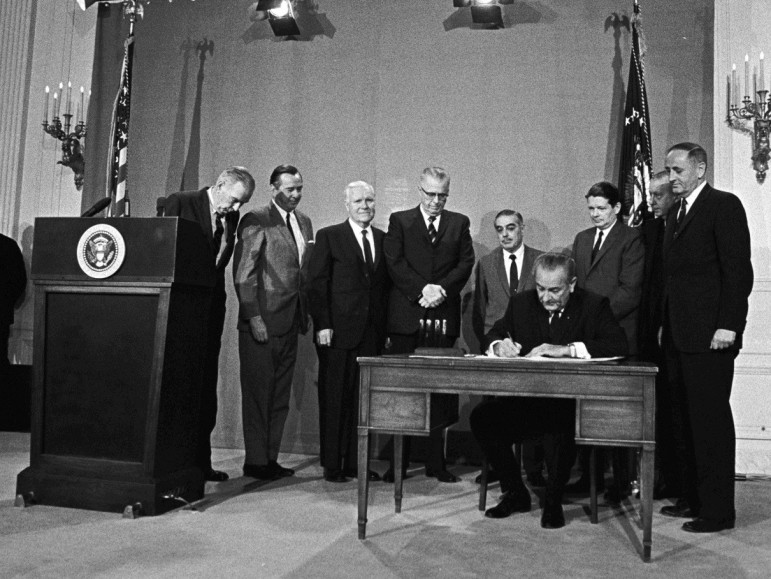 President Lyndon B. Johnson signs the Public Broadcasting Act of 1967 in the East Room of the White House. (Photo: Yoichi Okamoto, LBJ Library)

In his introduction, Johnson refers to Secretary of Health, Education, and Welfare John W. Gardner; Sen. John O. Pastore of Rhode Island; and Rep. Harley O. Staggers of West Virginia, chairman of the House Committee on Interstate and Foreign Commerce. He later mentions Seymour N. Siegel, director of radio communications in New York City and a member of the broadcasters’ advisory council to the President.

Years later, On the Media host Brooke Gladstone pointed out that LBJ’s speech extends the notion of public broadcasting to envision something like what the Internet has since become. — Steve Behrens

It was in 1844 that Congress authorized $30,000 for the first telegraph line between Washington and Baltimore. Soon afterward, Samuel Morse sent a stream of dots and dashes over that line to a friend who was waiting. His message was brief and prophetic and it read: “What hath God wrought?”

Every one of us should feel the same awe and wonderment here today.

For today, miracles in communication are our daily routine. Every minute, billions of telegraph messages chatter around the world. They interrupt law enforcement conferences and discussions of morality. Billions of signals rush over the ocean floor and fly above the clouds. Radio and television fill the air with sound. Satellites hurl messages thousands of miles in a matter of seconds.

Today our problem is not making miracles — but managing miracles. We might well ponder a different question: What hath man wrought — and how will man use his inventions?

The law that I will sign shortly offers one answer to that question.

While we work every day to produce new goods and to create new wealth, we want most of all to enrich man’s spirit.

That is the purpose of this act.

It will give a wider and, I think, stronger voice to educational radio and television by providing new funds for broadcast facilities.

It will launch a major study of television’s use in the Nation’s classrooms and their potential use throughout the world.

Finally — and most important — it builds a new institution: the Corporation for Public Broadcasting.

The Corporation will assist stations and producers who aim for the best in broadcasting good music, in broadcasting exciting plays, and in broadcasting reports on the whole fascinating range of human activity. It will try to prove that what educates can also be exciting.

Television is still a young invention. But we have learned already that it has immense — even revolutionary — power to change, to change our lives.

I hope that those who lead the Corporation will direct that power toward the great and not the trivial purposes.

At its best, public television would help make our Nation a replica of the old Greek marketplace, where public affairs took place in view of all the citizens.

But in weak or even in irresponsible hands, it could generate controversy without understanding; it could mislead as well as teach; it could appeal to passions rather than to reason.

If public television is to fulfill our hopes, then the Corporation must be representative, it must be responsible — and it must be long on enlightened leadership.

I intend to search this Nation to find men that I can nominate, men and women of outstanding ability, to this board of directors.

As a beginning, this morning I have called on Dr. Milton Eisenhower from the Johns Hopkins University and Dr. James Killian of MIT to serve as members of this board.

Dr. Eisenhower, as you will remember, was chairman of the first citizens committee which sought allocation of airwaves for educational purposes.

Dr. Killian served as chairman of the Carnegie Commission, which proposed the act that we are signing today.

What hath man wrought? And how will man use his miracles?

In 1862, the Morrill Act set aside lands in every State — lands which belonged to the people — and it set them aside in order to build the land-grant colleges of the Nation.

So today we rededicate a part of the airwaves — which belong to all the people — and we dedicate them for the enlightenment of all the people.

So I think we must consider new ways to build a great network for knowledge — not just a broadcast system, but one that employs every means of sending and storing information that the individual can use.

Think of the lives that this would change: —the student in a small college could tap the resources of a great university.

Dr. Killian has just given me an exciting report of his contacts in Latin America as a result of some of the declarations of the Presidents at Punta del Este that he has followed through on and how these Presidents are now envisioning the day when they can dedicate 20 or 25 or a larger percent of their total resources for one thing alone — education and knowledge.

Yes, the student in a small college tapping the resources of the greatest university in the hemisphere.

— The country doctor getting help from a distant laboratory or a teaching hospital;

— a scholar in Atlanta might draw instantly on a library in New York;

— a famous teacher could reach with ideas and inspirations into some far-off classroom, so that no child need be neglected.

Eventually, I think this electronic knowledge bank could be as valuable as the Federal Reserve Bank.

And such a system could involve other nations, too — it could involve them in a partnership to share knowledge and to thus enrich all mankind.

A wild and visionary idea? Not at all. Yesterday’s strangest dreams are today’s headlines and change is getting swifter every moment.

I have already asked my advisers to begin to explore the possibility of a network for knowledge — and then to draw up a suggested blueprint for it.

In 1844, when Henry Thoreau heard about Mr. Morse’s telegraph, he made his sour comment about the race for faster communication. “Perchance,” he warned, “the first news which will leak through into the broad, flapping American ear will be that Princess Adelaide has the whooping cough.”

We do have skeptic comments on occasions. But I don’t want you to be that skeptic. I do believe that we have important things to say to one another — and we have the wisdom to match our technical genius.

In that spirit this morning, I have asked you to come here and be participants with me in this great movement for the next century, the Public Broadcasting Act of 1967.

This act has a host of fathers. Many years ago when I was a Member of the Senate I had a bill prepared — Mr. Siegel drafted it for me — on public television. I had difficulty getting it introduced.

I asked Senator Magnuson to introduce it. He did. I am sorry he can’t be here today. But he called me before I came over here and explained to me how happy he was that this event was taking place.

I don’t want to single out any one person, because there are so many who have worked so long to bring this bill into where it is this morning to be signed.

I do want to recognize, though, in addition to Senator Magnuson, Senator Pastore, the Chairman of the subcommittee who has spent many days, weeks, and years in this effort, Senator Cotton, the ranking member of that committee, Chairman Staggers, Congressman Macdonald, Congressman Springer, all of whom have been part of the team that has brought this measure to the White House to make it the law of our land.

I should like to send a very special word of greeting to Mr. William Harley and the National Association of Educational Broadcasters who are gathered out in Denver today and who are participating in this ceremony by remote control.

As I mentioned before, we are honored to have Dr. James Killian here this morning. We are grateful to him and other members of the Carnegie Commission who provided the ideas and inspiration some of which are incorporated in this legislation.

I think I should add that John Gardner came to me in the early days when he was head of the Carnegie Commission, before we brought him in here, and suggested this Commission and asked me to help participate in forming it and making suggestions.

We are indebted to Dr. Gardner for this as we are to many things that he has done to provide leadership in the field of what is really important in the world — the education of our people.

At this time I am going to call on Dr. Alan Pifer, who is president of the Carnegie Corporation, who has a statement that I hope will be of interest to all of you. Dr. Pifer.

If there are any other distinguished and generous people, I will be glad to recognize them. If not, I want to express my personal appreciation to Mr. Douglass Cater of the White House staff for the many months that he has followed this legislation and worked on it.