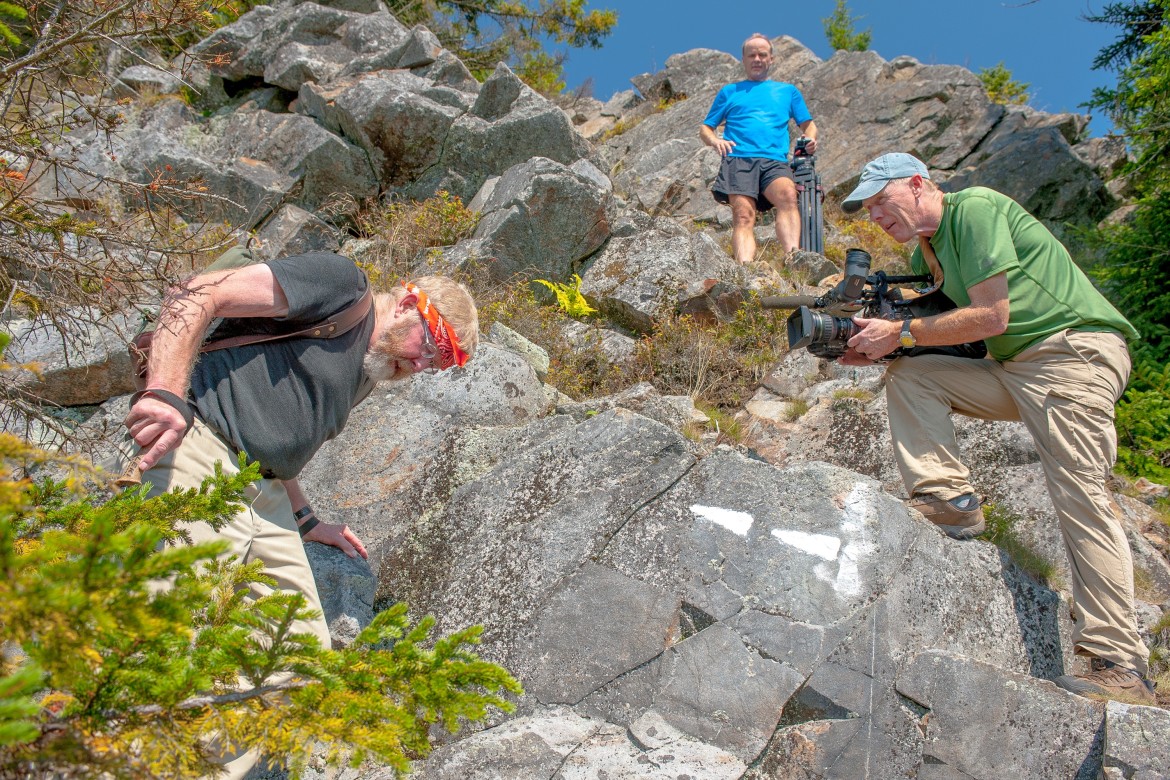 Willem Lange, host of NHPTV’s Windows to the Wild, hikes while EP Phil Vaughn and videographer Steve Giordani look on. The series has resumed full production of up to 12 new episodes annually.

Four years after weathering the sudden and irreversible loss of state funding, New Hampshire Public Television has returned to financial stability and growth in its membership as an independent station that operates in collaboration — rather than competition — with neighboring public broadcaster WGBH in Boston.

The New Hampshire network, which relied on state support for 31 percent of its annual operating budget prior to the funding loss, now employs a much smaller staff and operates on a revenue stream that’s roughly one-third less than earlier levels. But after a restructuring that included outsourcing of backroom operations in development and master control, it has preserved local service, strengthened its membership program and repositioned itself as an independent source of PBS programming for residents of the Granite State.

In the first six months of 2011, NHPTV faced a political storm as the state legislature moved quickly to zero out subsidies for the network, ripping $2.7 million from its planned operating budget of $8.8 million. With little warning, the continued sustainability of a separate, independent New Hampshire PTV service was called into question.

Yet even though NHPTV couldn’t slow or stop this worst-case funding scenario, the most likely outcome — a complete station collapse or external takeover — didn’t happen. Instead, NHPTV weathered the storm through a series of difficult decisions that radically altered its basic operations and its relationship with its neighbor WGBH, a regional and national powerhouse that had been its competitor for viewers and members within their overlapping coverage area.

Here in summary are the steps that NHPTV’s leadership took to get through the 2011 crisis:

The partnership that NHPTV and WGBH established was far more extensive, complicated and risky than most observers recognized at the time. Beyond outsourcing major pieces of NHPTV’s day-to-day operations to WGBH, the agreement fundamentally changed its audience reach and membership prospects by discontinuing carriage of NHPTV’s program service on Comcast cable systems in northeastern Massachusetts and ending its fundraising there. By focusing its programming and fundraising on New Hampshire, NHPTV lopped off half its current-year viewership and potentially a quarter of its membership.

Fortunately, the risks paid off. By 2015, NHPTV was stable financially and had resumed full production for two of its flagship local programs. It also had revitalized its community outreach and engagement efforts. “We are now financially smaller but operationally stronger,” said NHPTV CEO Peter Frid.

Mike Lussier, acting NHPTV c.f.o., said the decision to collaborate with WGBH “saved us from a very dreary future.”

What relevance does this case offer to the broader public broadcasting community? In some regards the situation faced by NHPTV’s leaders was unusual; not only did they have to negotiate across an immense array of operational and strategic issues, but they had to do it with WGBH, the largest public broadcasting operation in the country and their longtime competitor for regional viewers. Yet NHPTV shared many characteristics with other small to midsized PTV operations, including:

The extraordinary changes undertaken at NHPTV were possible because its leaders understood, as Chief Content Officer Dawn DeAngelis said, “we had to change or go dark.” Recognizing this, they acted early to develop a clear, thoughtful and well-grounded path forward. Also, leaders at both NHPTV and WGBH were committed to preserving NHPTV’s public service viability and acted as partners to navigate the change.

As the New Hampshire legislature was still debating the budget bill that would cut PTV funding, Frid secured a commitment from CPB to retain Silverman Consulting, a Chicago-based firm that analyzed NHPTV’s finances and operations. In May 2011 the consultants delivered a report that laid out both short- and long-term options and framed many of the consequential decisions.

When Governor John Lynch eventually signed the bill that zeroed out funding for public television, NHPTV executives had little choice but to act on the report’s recommendations, beginning with a $2 million reduction in projected fiscal 2012 spending. The cuts included:

With these budget cuts and revenues from a special fundraising appeal to viewers and donors, NHPTV balanced the fiscal 2012 budget, giving the station leaders about one year to design and implement a longer-term plan to ensure financial stability and a sustainable public service profile. All of the options proposed in the “Silverman Report” involved either collaboration with or consolidation into another New England station. At this stage, a large-scale collaboration with WGBH surfaced as the most attractive and feasible path forward.

Negotiations with WGBH began in early summer 2011 and lasted 13 months. Multiple working teams covering the many areas of discussion met almost weekly. Key point people from both sides coordinated negotiations and implementation planning efforts. Leadership from both stations interacted regularly to drive the process, and working agreements were completed by August 2012.

The negotiations benefited from an early-stage agreement on broad objectives, including a shared understanding that there would be no merger between the neighboring public TV stations. NHPTV, which in 2011 was already well along in its plan to split from its licensee, the University System of New Hampshire, would operate as an independent station, separate from WGBH. The two sides also agreed that a favorable settlement would:

The objectives included a more complex and risky set of goals. The two sides agreed to try to:

During the negotiations, participants regularly referred to these bullet points of shared objectives as they worked to resolve their differences.

Although the negotiations were difficult, they went like clockwork, Frid said, because both parties had developed a common vision at the outset. “No one had a separate agenda,” he said. However, as the talks proceeded, members of his team sometimes feared they were ceding too much control to WGBH.

Trust grew as the discussions continued, and participants on both sides later praised the commitment and willingness to take risks demonstrated by Frid and NHPTV Board Chair Jeff Gilbert as well as top WGBH executives Jon Abbott, c.e.o., and Ben Godley, c.o.o.

Goals to rationalize public TV service and divide member support in the stations’ shared coverage area involved significant financial risk for NHPTV. The member revenue it put on the table was a significant portion of its $6.6 million revenues for fiscal 2012. WGBH, reported more than $170 million in funding that year, was well poised to absorb the loss of donations from New Hampshire. But the payoff was the opportunity to carve out distinct primary service areas for both stations, reducing or eliminating head-to-head competition for viewers and members who had experienced overlapped service and duplicative fundraising campaigns for decades.

With this audience tradeoff, NHPTV became “the PBS service” for New Hampshire, but it lost its Comcast cable service to more than a half-million Massachusetts viewers who made up almost half its audience.

The plan to “swap” Massachusetts and New Hampshire members also posed significant financial risk for NHPTV: Viewers from northeast Massachusetts made up 22 percent of NHPTV’s member file, or 5,000 of 21,000 members. And those Massachusetts viewers accounted for 31 percent of NHPTV’s FY12 annual member revenues, $667,000 out of $2,113,000. The market rationalization agreement would end all NHPTV fundraising solicitations to these supporters.

Balancing these risks were some powerful — but untested — benefits:

In addition, NHPTV’s basic financial accounting services would be transferred to WGBH. Any potential cost savings here were small because these services were already outsourced to the state network’s previous licensee, the University System of New Hampshire.

Implementing these plans took another year, with bilateral teams systematically identifying and resolving challenges that arose. The sheer volume of organizational change required a large commitment from both frontline staff ­­­and senior management.

Restructuring of NHPTV’s program and broadcast operations went smoothly, but outsourcing of financial accounting and membership work was more difficult to implement. Issues that arose were systematically resolved over time.

More than three years into the implementation phase, there is deep agreement within NHPTV and WGBH that the reorganization has been a success — more so than many participants had originally expected.

The number of donors in NHPTV’s membership file also dropped after the service area changes, but it has since substantially recovered. After turning the Massachusetts-based members in its database over to WGBH early in fiscal 2013, NHPTV’s donor file fell that year to 20,508. But by 2015, its membership had grown back to 21,663.

Cost savings and freed-up management attention have been channeled into audience service. NHPTV resumed full local production of Granite State Challenge and Windows to the Wild. The outdoors series resumed its schedule of 10–12 new episodes annually, funded in part with a major new grant supporting programming on North American birds. In addition, NHPTV introduced new shows such as Our Hometown, a series of community profiles produced in collaboration with towns and cities across the state, and Raising New Hampshire, part of a national program initiative on early childhood development.

With master-control operations handled by WGBH, NHPTV engineers have been able to focus their attention on issues better suited to their advanced engineering skills. The outsourcing of backroom membership work led to improvements in the quality of systems and materials, and to an expansion of member service capacity.

Through the combined benefits of efficiency and capacity, NHPTV retained a major role in the civic life of New Hampshire, earning recognition in the fall of 2012 as Broadcaster of the Year from the New Hampshire Association of Broadcasters and later winning additional regional broadcasting awards.

Still, two areas of work remain underdeveloped: Annual major gift revenue is modest, even by the low standards of a state known for its lack of philanthropy; and plans for rebuilding local public affairs programming have not yet been realized. Both of these items are on NHPTV leadership’s agenda, with the WGBH collaboration aimed at helping them succeed.

A loss of millions of dollars in state funding is a manager’s worst nightmare. But the situation at NHPTV in the spring of 2011 could have been worse. The executive team had to consider that the path to survival might involve being absorbed into a dominant regional rival.

Frid, his senior staff and board stepped up, decisively and effectively. So did their counterparts at WGBH. Leadership at both stations found ways to preserve local decision-making while providing the scale, efficiency and capacity that NHPTV, like most small or midsized stations, couldn’t have achieved on its own.

Frid and the board of NHPTV made painful decisions: laying off colleagues, cutting salaries and radically restructuring operations. Those decisions paved the way to a sustainable financial position.

WGBH’s Abbott, Godley and their team chose to ensure the viability of NHPTV rather than extend their regional franchise. Godley continues to meet annually with NHPTV’s board of directors to demonstrate WGBH’s ongoing commitment. In a company accustomed to shaping national strategy and producing PBS’s finest programs, it takes a good deal of courage to invest substantial personnel time in the reorganization of a modest-sized state network, even one located next door. That investment has also paid off, so far, in a more durable NHPTV.

Initially, CPB funded the “Silverman Report” that laid out a roadmap, and it later provided additional Community Service Grant funding of $750,000 to each station as part of its Television Collaborative Bandwidth Optimization Program. But it was up to the station leaders to sort through the options, negotiate the agreements and sell the value of collaboration at every level of their organizations. Without leadership, the process would have stalled, deadlocked in details or exhausted from the effort, before it could yield the benefits it is now delivering.

With all of that in mind, we drew three lessons from this case study:

Mark Fuerst directs the Public Media Futures Forums, a project funded by the Wyncote Foundation of Philadelphia to provide analyses of the strategic challenges facing public broadcasting. The Wyncote Foundation provides financial support to Current through a separate grant.