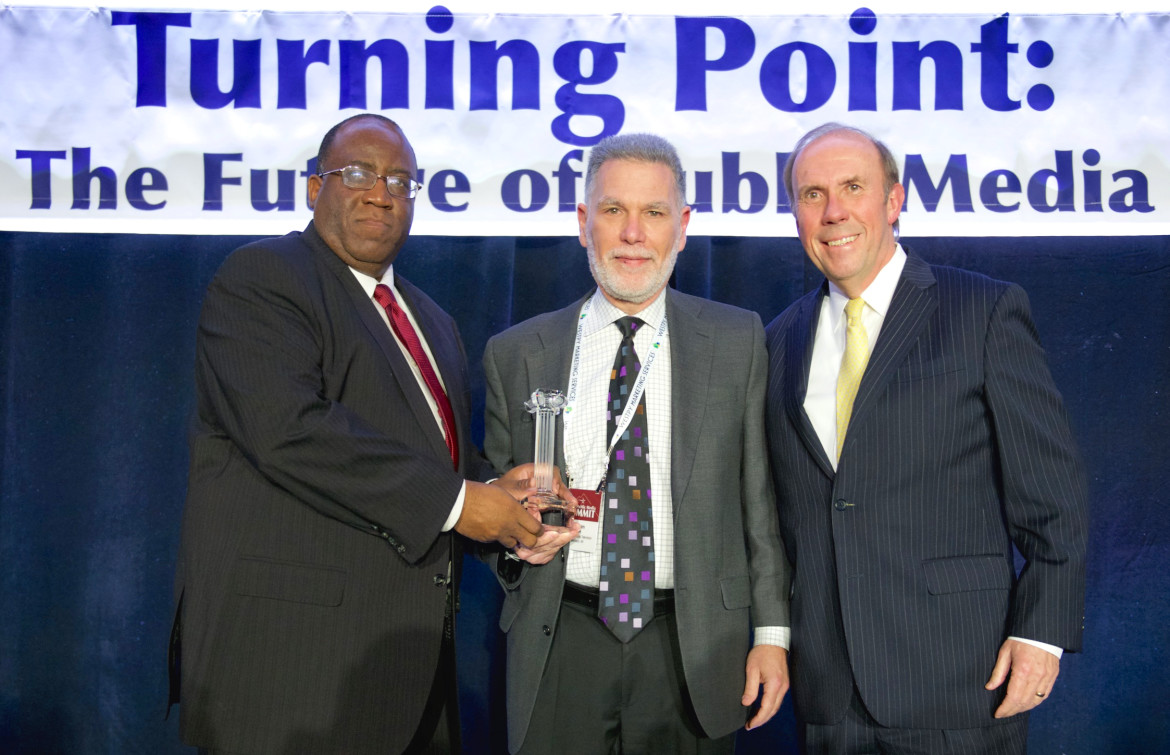 The winner of the inaugural Pillar of Public Service Award is Malcolm Brett, director of broadcast and media innovations for Wisconsin Public Television. The honor recognizes “contributions of an extraordinary leader in one of public television’s three pillars of public service: education, public safety and civic leadership.”

In presenting the award, APTS President Pat Butler said, “Malcolm’s remarkable leadership has resulted in several groundbreaking and novel initiatives about and for veterans,” including LZ Lambeau in 2010, which drew some 70,000 participants, and a three-hour documentary, Wisconsin Vietnam War Stories, with personal stories from Vietnam veterans. Several other stations have since launched similar work with veterans based on WPT’s template.

“We are gratified by the number of stations around the country who have taken up this work,” Brett said. “We feel privileged to contribute to the recognition and support of our veterans, and to contributing to dialogue around veterans’ issues in service to them and to the communities they return to.”

Butler said that Brett’s commitment to civic leadership “has helped citizens and communities understand the issues veterans face locally and regionally, and enabled them to develop solutions based on facts and rooted in community partnerships.”

This year’s recipient of the David J. Brugger Lay Leadership Award is the National Friends of Public Broadcasting, a 46-year-old organization that promotes volunteerism in public media.

“From volunteers’ presence at community fairs and festivals to advocating for public media funding in both the halls of Congress and at state capitols,” Butler said, “National Friends’ efforts are unwavering and extraordinarily effective.”

Pacella accepted the award on behalf of National Friends “and the thousands of public media volunteers across the country,” she said. Pacella noted that it was Brugger, APTS’ president in 1995, who specifically called on National Friends to rally when lawmakers threatened to end federal funding for public broadcasting.

Butler noted Agnew’s “critical engagement” with the Mississippi Congressional delegation, particularly with Republican Sen. Thad Cochran on Ready To Learn funding. Also, Butler said, Agnew’s efforts “to highlight the need for funding for the public television interconnection system were critical to securing funding for that project.”

In accepting the award, Agnew thanked “the public broadcasting family who have worked tirelessly, from making Hill visits to organizing letter-writing and phone campaigns. They have selflessly given of themselves for the good of the system.”

Waste said that the engagement in public media by Alaskans “as listeners, viewers, participants and advocates is reflected in supportive positions taken by our congressional delegation members.”

APTS also presented three Champions of Public Broadcasting Awards, which go to political leaders and others who safeguard support to public broadcasting. This year’s recipients: