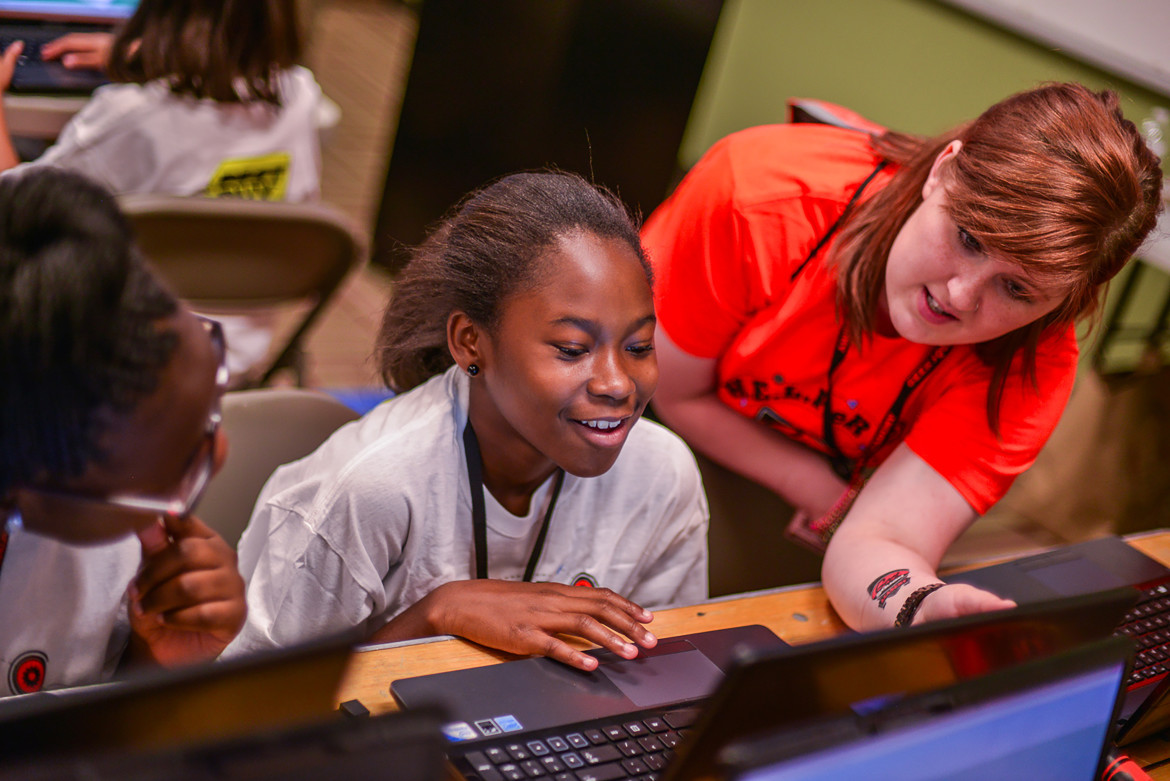 At a Geek Squad Academy offered as Dallas City of Learning event this summer, students learn how to connect digitally. 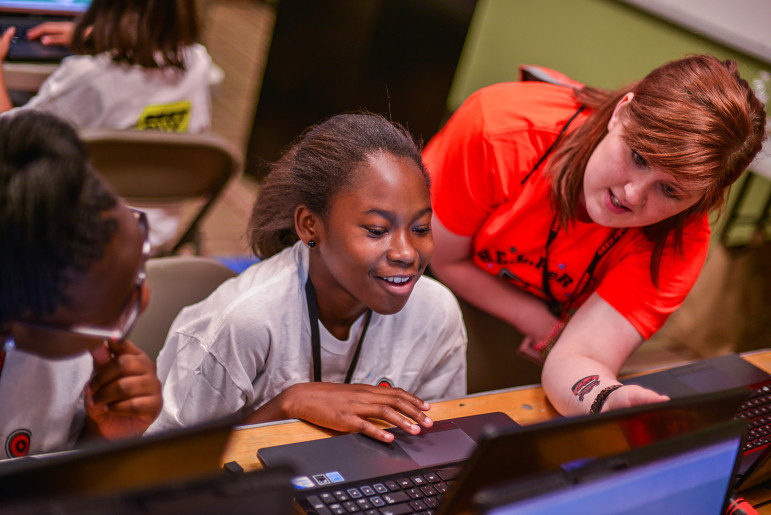 At a Geek Squad Academy offered as Dallas City of Learning event this summer, students learn how to connect digitally.

A nonprofit backed by the MacArthur Foundation is preparing to give digital learning a mighty jolt with the rollout of LRNG, a new platform designed to help close the achievement gap for children ages 13 and up.

Collective Shift, unveiled early this month as the new hub for the MacArthur Foundation’s investments in digital education, received $25 million from the foundation to introduce LRNG, which it hopes will become a “new ecosystem” for 21st-century learning.

Community-based nonprofits — including national and local public media organizations — have been exploring models to educate children in a digital world and level the playing field tilted by increasing economic inequality, soaring higher-education costs and shifting employer needs. LRNG is MacArthur’s answer, combining ways for students to connect with learning experiences in the digital and physical worlds.

Public media’s involvement is limited at this early stage, but LRNG is closely aligned with its mission of providing access to education.  Just as Sesame Street hit the public airwaves four decades ago to bridge the achievement gap among preschool children, LRNG wants to give older kids a fighting chance in a vastly more complex landscape.

“In today’s connected age, the possibilities [for learning] are endless, but there’s such a sharp divide in access between those who the system is opened to and those it’s not,” said Jessica Lindl, c.o.o. of Collective Shift. “How do we create pathways for youth into successful jobs and civic engagement?”

LRNG is built around a new pedagogy called Connected Learning that aims to bring together the fragmented spheres of a young person’s life — interests, academic and work opportunities, and peer culture. It is an umbrella for MacArthur’s previous Digital Media & Learning initiative and also shorthand for a new web-based system supporting it that is preparing for a major launch in May.

MacArthur previously backed pilot programs in four “Cities of Learning” that served 100,000 kids last summer. Now Collective Shift is overseeing expansion into 10 new cities, to be announced in early 2016. The program’s goal is to engage a million young people in 70 cities by the year 2018.

LRNG will absorb the digital efforts of the pilot cities — Chicago, Dallas, Pittsburgh and Washington, D.C. — and incorporate new Cities of Learning as they roll out. But students everywhere will be able to access its content and build connections to their peers and others who support their learning goals.

Now in beta testing, LRNG combines an ever-expanding constellation of curated content focused on out-of-school learning, including programs from the Cities of Learning and a social network where kids can connect.

LRNG is designed to help students study the topics and learn the skills that interest them, building credentials along the way by earning digital badges that might eventually become currency for college or job applications.

A student types in an interest or a passion — from game design to photography, drama, science or public speaking — and the search brings up a curated playlist of websites, local organizations and people available to help them build those skills, online and in person. 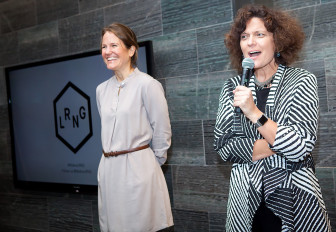 LRNG was developed through a partnership with game developer GlassLab, a leader in new approaches to assessment and learning that is merging with Collective Shift.

“This is not the first time anyone has tried this,” said Lindl, GlassLab’s former executive director. “Our hope is to partner with leaders, like public media, and create the infrastructure to put in place. . . . [It’s] a new model and a new approach that could really close the equity gap.”

As LRNG rolls out into more cities, it will be functioning as a deep-pocketed conductor; hundreds of organizations and individuals within cities and towns — companies, cultural and academic institutions, nonprofits, teachers and trained professionals in a range of fields — are the orchestra.

The approach worked successfully over the past three years in the pilot cities, starting in Chicago, where MacArthur is based, as local anchor organizations rallied local institutions and businesses to develop programs, playlists and badges for students in their communities.

In Dallas, which became a City of Learning in 2013, Evan Cleveland, of LRNG’s local anchor organization Big Thought, has been involved in recruiting and training partners for the program. He is working with local PBS affiliate KERA to redesign its listing for local arts and cultural events, Art&Seek, for use on the platform.

“We began recruiting organizations . . . that have museums and cultural centers, and asking them to join, to learn about the project and create these digital badges for the summer,” Cleveland said.

So far Cities of Learning has focused on summer projects, but the program will go year-round next year under LRNG.

“What [LRNG] is trying to do is leverage the fact that, since students are pursuing their interests out of school regardless of their socioeconomic situation, we should find a way to validate it,” Cleveland said. “Kids in underprivileged communities are doing amazing things with Minecraft or photography that, if they could receive a accreditation for it, would level the playing field.”

The platform is designed with mobile devices in mind, which is how most kids access the Internet.

Since employment is one of the goals, corporate involvement has been key to the pilots. Fossil Group, the Dallas-based company that designs and manufactures clothing and accessories, worked with Big Thought to create playlists for LRNG on logo design and jewelry making. Among other activities, students who seek badges meet with experts in the field at Fossil headquarters.

Cleveland described playlists as themed groupings of local activities that can be completed online or in person, and that list the electronic badges students can earn in each area.

“Kids in underprivileged communities are doing amazing things with Minecraft or photography that, if they could receive a accreditation for it, would level the playing field.”

The badge is a “micro-credential” that represents a verifiable benchmark of achievement, Cleveland said. It doesn’t have the same weight as a diploma, but provides a way for students to demonstrate what they learned through an LRNG extracurricular experience. A teen who completes a program at the Dallas Museum of Art, for example, can attach a badge, or a link to it, on their resume, providing an explanation of what was accomplished and samples of their work.

City of Learning–based badges are approved by local anchor organizations. Groups outside the cities can work directly with LRNG’s Learning and Assessment Group to develop badges. Not all badges need in-person interaction, and requirements can be flexible.  The Dallas Museum of Art could create the activities but allow “a kid in Peoria to find a great project, do it in their own city and get a badge,” said Cleveland.

‘SciGirls’ gets ‘in on the ground’

SciGirls has designed a Citizen Science Badge for the LRNG platform, said Joan Freese, interactive producer of the show. Her team had been working with GlassLab on a separate project when developers asked if SciGirls had content that might work on the LRNG platform.

It helped that a GlassLab staffer who had worked at TPT years ago “understood what we did completely,” Freese said.

Working from a sample badge, SciGirls created the Citizen Science Badge from video and hands-on activities that it had originally developed for teachers, Freese said. The content provides instruction on data collection and guides students through a science project of their choosing.

The badge, among 100 that have been approved so far, will be available to all LRNG users when the site launches. When a student completes the program, SciGirls will verify that she earned the badge.

Much of LRNG’s content seems to come from indie producers, Freese said. Public stations that don’t have content that’s already published and “ready to go” might have a harder time finding a way into LRNG.

Freese, who worked at the Minnesota Educational Computer Consortium before joining TPT a decade ago, said the project has injected new energy into the digital education space. She attended a Digital Media Learning conference this summer in Los Angeles that MacArthur organized and said, “It has been kind of fun going along for the ride and seeing how fast they developed this.”

Given the spiritual kinship and PBS’s strong brand, cooperation seems natural, albeit with a bit of tweaking, according to Freese and Carole Wacey, v.p. of education at WNET in New York.

Wacey pointed to PBS LearningMedia, which is geared more to teachers than students and puts large amount of content online for use in classrooms. “We do a lot with educators, and provide great video-based content,” she said. “We go out into the community locally and nationally, and are doing a lot of professional development.”

That focus could shift, however. A recent review of LearningMedia’s impact recommended “that we should probably support more direct-to-student content,” Wacey said.

She sees a kinship between LRNG and public media’s American Graduate initiative, which is designed to find community-based solutions to the high school dropout crisis.

Collective Shift’s Lindl said LRNG welcomes the opportunity to work with PBS. “We would love a chance to navigate that conversation,” she said. “Our team is actively focused on creating partnerships right now,” including opportunities for working within schools.