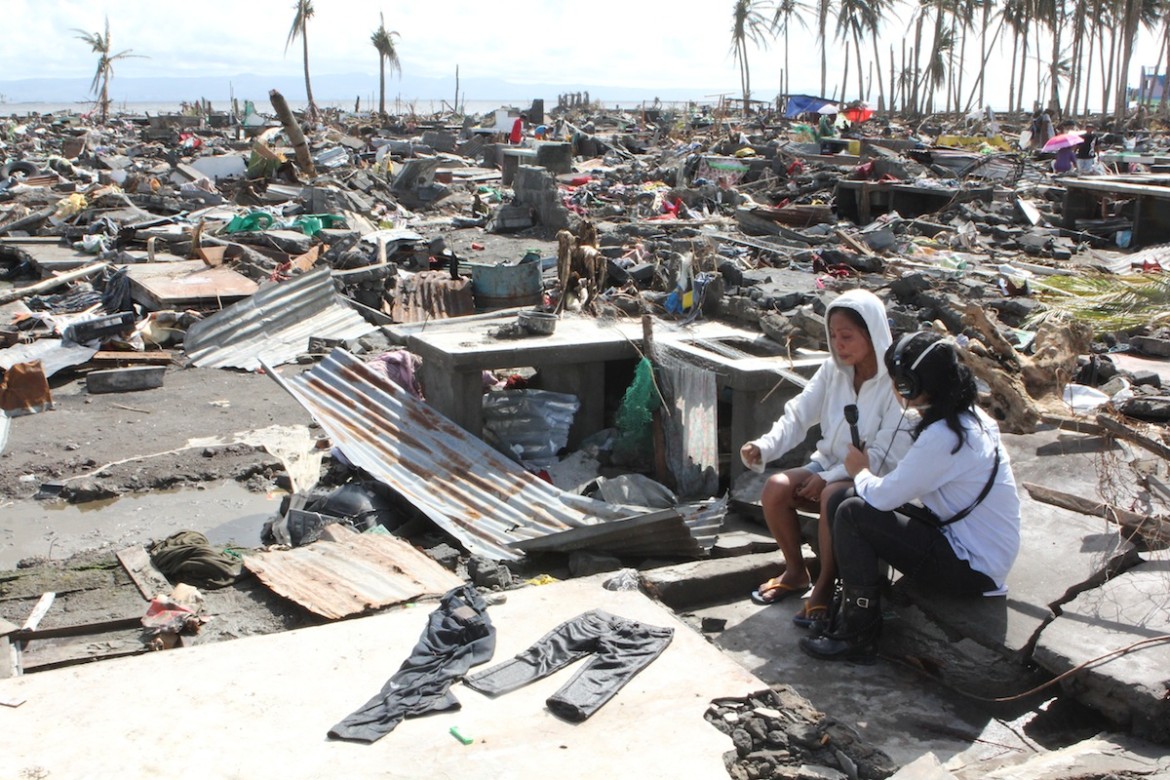 Aurora Almendral conducts an interview among the destruction left by Typhoon Haiyan in Tacloban, Philippines in November 2013. The Feet in Two Worlds fellow wasn’t sure what a news spot was when NPR asked her to report on the typhoon. (Photo courtesy of Aurora Almendral)

Feet in 2 Worlds has a staff of six part-timers and no office, but that hasn’t stopped the tiny nonprofit from making a significant contribution to efforts to increase diversity in public radio.

Run out of founder John Rudolph’s home in southern Maine, the 10-year-old organization has forged partnerships with respected news organizations and shepherded a slew of journalists from immigrant communities and the ethnic press into new careers.

“We’re bringing untold stories from immigrant communities to public radio listeners, but we’re also bringing new voices that are changing the infrastructure of public radio,” Rudolph told Current. “We’re putting people at the table when decisions are being made who were not at the table before.” 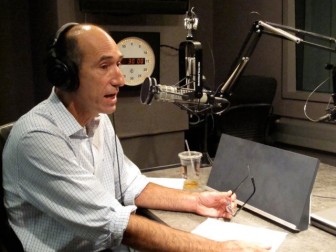 Fi2W grew out of an hourlong documentary Rudolph produced in 2005 for Think Global, a collaboration with American Public Media. The doc, Feet in 2 Worlds: Immigrants in a Global City, featured Haitian, Ecuadorian, Polish, African and South Asian newcomers to New York. Rudolph, a veteran of both public and commercial radio, had the itch to do narrative journalism at the time.

“I concluded that rather than me being the one to tell the stories, it really made more sense to find immigrant journalists who could narrate stories from their communities or their own personal stories,” said Rudolph.

After the documentary aired, the producers — which included Rudolph, WNYC editor Karen Frillmann, WNYC producer and engineer Jocelyn Gonzales and Andrew White, then director of the Center for New York City Affairs at The New School — looked at each other and said, “This is more than just a radio program. This is actually a way to bring new voices to public radio,” Rudolph said.

Among the contributors to the 2005 documentary were Ewa Kern-Jedrychowska, a reporter for the Polish Daily News; Macollvie J. Neel of the Haitian Times; and Arun Venugopal, a feature writer for the newspaper India Abroad.

The New School was the documentary’s fiscal sponsor, and Fi2W has been affiliated with the Center for New York City Affairs ever since.

As both a training and newsgathering organization, the mission of Fi2W is to tell stories of today’s immigrants to the rest of America. Fellows learn radio journalism and produce stories for major public radio news outlets.

An independent nonprofit funded primarily by foundations, Fi2W offers modest three- to four-month paid part-time fellowships to minority and immigrant reporters who are referred to the group or go through its workshops. Occasionally, Fi2W puts out a call for applicants. After the formal fellowships end, Fi2W continues to mentor the fellows.

As one of Fi2W’s first fellows, Arun Venugopal produced a story about the gay Indian underground party scene in New York. He spent about five months working on his sound-rich piece about the party scene, which featured Bollywood music, drag queens and gay Indian comedians.

“If anything, I was like, ‘Wow, this was a slow process,’” Venugopal said. “But it was good, because you don’t just learn the skill [of radio journalism], you’re also demystifying this institution of public radio. You’re around people and realize, ‘Oh, this is what they do. OK, I think I can do this.’ And that kind of exposure is rare in this business. It was really useful to learn the basics of the job like that.”

Venugopal’s second radio piece was about kabaddi, an Indian sport that combines tag and wrestling. He worked a lot faster on that feature, banging the story out in a matter of days. Soon he was freelancing for WNYC and in November 2005 was hired as a staff reporter. For the last few years, Venugopal has produced Micropolis, a WNYC series on race and identity.

Venugopal may be Fi2W’s biggest success story so far, but more of Fi2W’s roughly 40 fellows to date have gone on to make their mark in public radio.

Martina Guzman, a daughter of Mexican immigrants, said Fi2W was “profoundly instrumental” in shaping her life.

Though she graduated from Columbia University’s journalism school, “ethnic reporters need a different kind of guidance” than their mainstream counterparts, she said. She praises John Rudolph as a patient mentor who taught her how to set scenes and tell a good story.

“John understood that ethnic reporters have a completely different perspective and completely different outlook on their community,” said Guzman. “I had been told, ‘Don’t be a reporter that reports on the Hispanic community. Learn how to do other things.’ Well, that was fundamentally my interest. My interest was to tell stories about a marginalized community that had very little representation on public radio, which were Latinos.”

Guzman started covering the 2008 presidential campaign as a Fi2W fellow. After the election, she was hired as a community reporter at WDET in Detroit. She worked there for five years before leaving this spring to freelance. Guzman currently reports for Next City magazine, NPR and FOX News Latino.

Another former Fi2W fellow now freelancing is Aurora Almendral, who returned to her native Philippines and now reports for NPR, the BBC World Service and PRI’s The World. Almendral wasn’t sure what a news spot was when NPR called and asked her to file one on Typhoon Haiyan in November 2013.

She told NPR’s newscast unit that she’d be happy to file, then promptly called Fi2W’s senior producer, Jocelyn Gonzales, in New York City and asked her to explain what exactly a news spot was. Almendral grasped the concept quickly — she ended up filing more than a dozen spots in three days.

As a Fi2W fellow, Almendral did a piece about Maggi, a brown sauce that immigrants from a number of countries have claimed as theirs.

“It’s not the kind of [story] that we would’ve stumbled on,” said Jennifer Goren, senior editor of The World, which aired the story. “This was a story she brought. It was her idea that came from conversations she had with other immigrants.”

Several Fi2W fellows have tackled food’s role in immigrant communities. Fi2W’s interest in all things culinary is influenced by Rudolph’s wife, Kath Gunst, a respected cookbook author and resident chef at NPR’s Here and Now. Gunst will be among the presenters at a Fi2W workshop to be held at The New School in New York City Oct. 16–18. A dozen veteran and emerging food journalists will learn audio production and multimedia storytelling at the workshop. 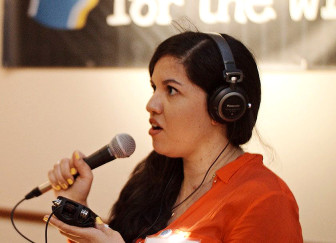 Also teaching at the workshop will be Fi2W alumnus Von Diaz, who was born in Puerto Rico and produces Cocina Criolla, a multimedia project about Puerto Rican cooking. Diaz’s Fi2W fellowship was funded by a grant from the Knight Foundation to support reporting on LGBT issues in immigrant communities. She did a story for The World about a homeless 19-year-old African immigrant who was kicked out of his mother’s house after a cousin outed him.

Diaz said she was struck that radio was the perfect medium for telling a story about a gay homeless youth, because he was able to tell his story without showing his face.

“I would not be a radio reporter if it had not been for Feet in 2 Worlds,” Diaz told Current. “I had no idea I wanted to do radio.”

Last year, StoryCorps hired Diaz as a production assistant, and she has risen quickly in the organization. Early this year she was promoted to producer for StoryCorps’ Military Voices initiative. A few months ago, she was promoted again to oversee its LGBT initiative, Out Loud.

A former Fi2W editor found working with the immigrant and ethnic journalists a rewarding experience. Katie Davis worked as a freelance editor for Fi2W after editing stories with Fi2W fellows as the editor of Latino USA.

“They were top-notch reporters, and I learned a lot from them,” said Davis, who went on to serve as senior producer of APM’s The Story.

Davis edited a piece about Latino “disaster migrants” who were working on the cleanup of the Gulf coast after the Deepwater Horizon oil spill in 2010. The story was done by Fi2W fellow Annie Correal, a reporter with the Spanish-language daily newspaper El Diario/La Prensa at the time. Correal, who now reports for the New York Times, struck Davis as “stellar.”

“It’s hard to enter another world but to be working so closely with these reporters. I felt that I did that,” Davis said. “It’s like they took me by my elbow and said, ‘Now, we’re going to go here.’ It was like I had a foot in another world, and so, too, did the listener.”