A WNYC podcast producer has earned the attention of the Online News Association with “Bored and Brilliant,” a project that helps listeners cut through digital distraction while engaging them in new ways. 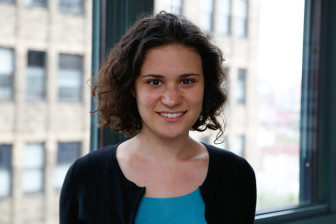 Audience engagement is crucial to creating meaningful content, according to Ariana Tobin, an assistant producer for the station’s Note to Self podcast. In recognition of her work on “Bored and Brilliant,” ONA picked Tobin, 26, as one of three under-30 digital-first journalists to receive a 2015 MJ Bear Fellowship.

“Bored and Brilliant” challenges smartphone users to change their behavior in order to think more deeply and creatively, rather than just scrolling mindlessly on their phones. An email newsletter presents subscribers with six habit-changing and creative-thinking tasks, including having a photo-free day and constructing a dream house with the contents of one’s wallet. 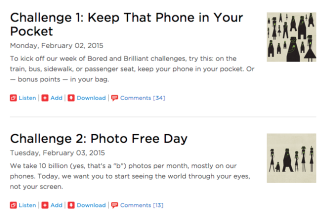 The newsletter also encourages participants, who sign up through WNYC’s website, to write to Tobin about feelings of being digitally overwhelmed. More than 20,000 people have signed up, and each of the emails have drawn more than 100 responses, she said.

“The subject matter was perfect for [audience engagement], because people need and want to talk about it,” Tobin said. “But it also hasn’t been talked to death.”

A weekly podcast, Note to Self focuses on finding balance in a digital world. “Bored and Brilliant” was the brainchild of the podcast’s host, Manoush Zomorodi. Zomorodi said she hadn’t been bored since she purchased her first smartphone, yet boredom is known to deliver neurological and creative benefits, Tobin said.

Producing “Bored and Brilliant” ended up being like a real-time conversation with listeners about a question the production team was also trying to figure out, Tobin said. The answers couldn’t be packaged beautifully for radio because they didn’t exist yet, but the questions still deserved attention, she said.

“If you don’t pick the right topic, then people aren’t going to talk to you for the heck of it,” she said.

Note to Self will continue to use this audience engagement process with future material as it continues to explore how people use their time and shape their digital environments, Tobin said.

Honoring a founding board member’s memory

With its process of engaging audiences on digital platforms around a variety of topics, Tobin’s work excited the ONA committee, according to selection committee chair Amy Eisman.

“If we don’t listen and engage the audience, then we’re whispering in the wind,” said Eisman, who directs a media entrepreneurship program at American University’s School of Communication. (Current is also part of the SOC.)

The fellowship Tobin received was created in honor of MJ Bear, a founding board member of ONA and early head of online operations at NPR who died in December 2010 of leukemia. In her work, Bear sought to bring younger voices to the forefront, Eisman said.

ONA also selected as fellows Keron Bascombe, 27, and Nadia Tamez-Robledo, 27. Bascombe is a Caribbean national who runs the blog Tech4agri, focusing on agriculture technology and innovation as well as youth engagement. He has previously worked on rural development and food security campaigns.

Tamez-Robledo created the interactive database Naming the Dead, which lists features of skeletons and clothing of undocumented migrants whose remains were examined by volunteers at Texas State University in San Marcos. The migrants are believed to have been trying to enter the country by migrating north through Brooks County, Texas.

The fellowships support the fellows in attending ONA’s conference in Los Angeles in September. Fellows will be recognized at the conference and will also participate in online sessions with ONA advisors.

“A lot of the action is coming from young people, and they’re leading the way,” Eisman said.