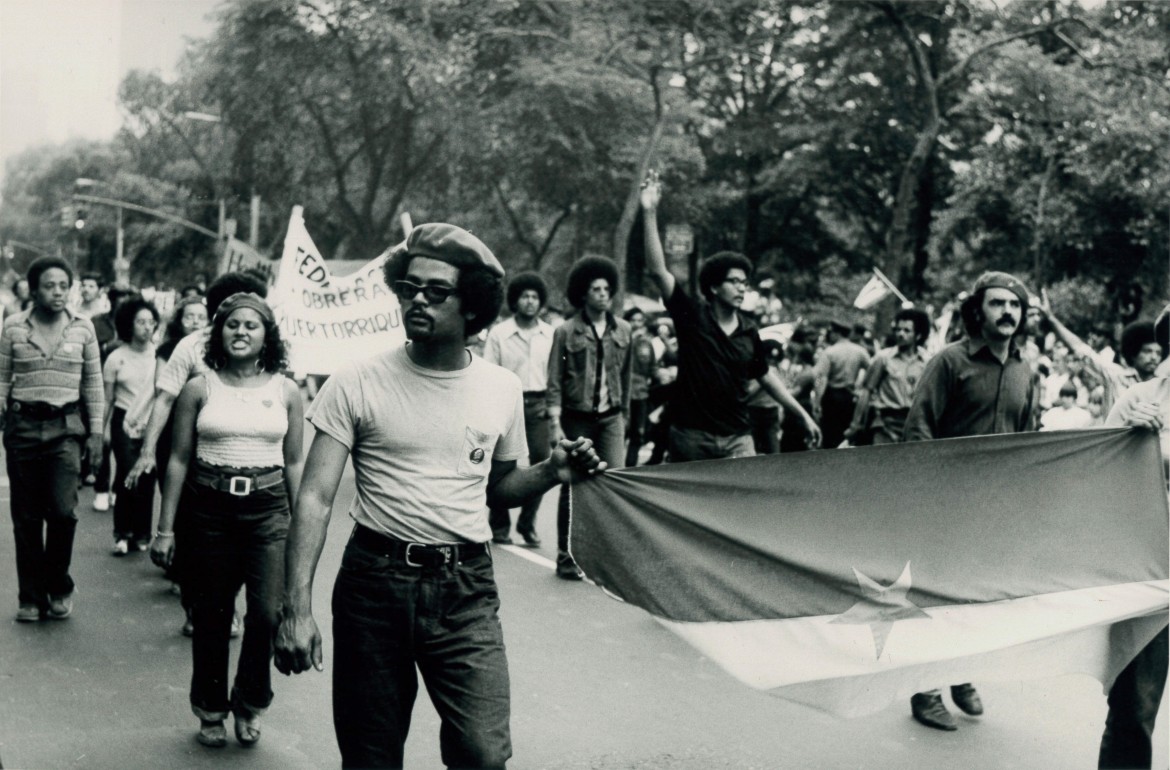 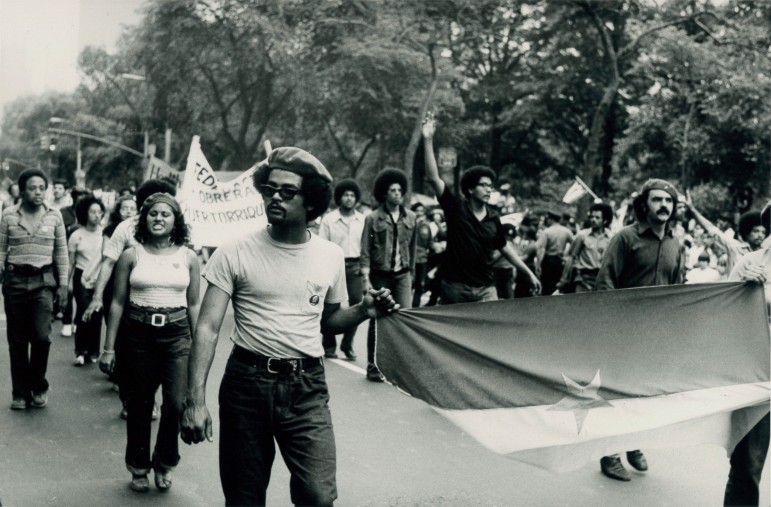 Legendary New York City newspaper columnist Jimmy Breslin once joked that the Young Lords, a militant Puerto Rican group, produced more great journalists than Columbia University’s journalism school. Several alumnae of the Young Lords did go on to careers as journalists after raising hell in the streets of Spanish Harlem. A few even made their marks in public media.

Active from the late 1960s through the mid-’70s, the Young Lords grew out of a Chicago gang, with the New York chapter becoming the epicenter of the organization. Chapters were also active in Philadelphia, Boston and Newark, N.J. The Lords sent thousands of people into the streets to call for Puerto Rico’s independence and to protest police brutality. 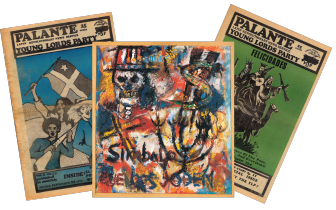 Their tactics, examined in an exhibit that recently opened at El Museo Del Barrio in New York City, are credited with pushing the city to improve sanitation services in East Harlem and spurring the construction of a new hospital in the South Bronx. The free breakfasts offered to all students in New York public schools are traced back to the Lords’ institution of a similar program in East Harlem.

“I think the Young Lords was one of the most influential organizations in the modern history of the Latino community in the United States in the last 50 years, certainly,” said newspaper columnist and Democracy Now! co-host Juan Gonzalez, whose involvement with the Young Lords shaped his work as an investigative journalist.

The Young Lords were inspired by the Black Panthers — though while the Panthers wore black berets, the Lords wore purple. Like the Panthers, the Lords were committed to fighting racism and opposing the U.S. military, while advocating for armed self-defense, freedom for political prisoners and a socialist society.

The Lords adopted the Panthers’ 10-point program in October 1969, along with three additional demands, including independence for Puerto Rico and the imperative that “machismo must be revolutionary.” Less than a year later, they replaced that plank with “Down with machismo and male chauvinism.” 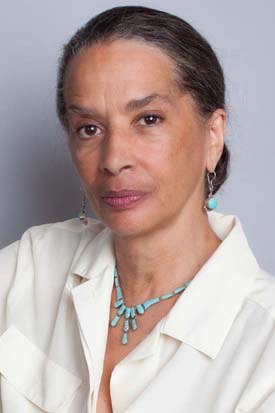 Denise Oliver-Velez chuckled recently while recalling the machismo debate. The first woman to serve on the Young Lords’ central committee, Oliver-Velez is black, not Puerto Rican.

The former urbanite now lives in Saugerties, N.Y., where she keeps chickens in her backyard. When she’s not teaching at the State University of New York at New Paltz, she writes for the left-leaning Daily Kos blog.

“I believe that you community-organize as a blogger,” Oliver-Velez told Current. “Blogging has become a vehicle for a lot of the things I’ve been dedicated to all my life.”

Oliver-Velez has often focused on the plight of African-Americans. She joined the Black Panthers and went to Africa with Eldridge Cleaver. She became the first executive director of the Black Filmmakers Foundation and was tapped to be the inaugural program director at WPFW-FM, which Pacifica created to serve Washington, D.C.’s predominantly African-American community.

“We were broke,” she said of her years at WPFW. “We used to take turns going on unemployment.”

After WPFW, Oliver-Velez worked for CPB in the late 1970s, managing its Minority and Women’s Training Program. Her office had a $6 million budget that was used to pay half the salaries of new minority employees at CPB-qualified stations for two years, as well as training costs.

“We had to bribe people to hire minorities and women at stations,” said Oliver-Velez, who was also involved in the creation of several of public TV’s minority consortia. “That’s how we forced stations to hire people of color.”

She and a co-worker travelled to Senatobia, Miss., to check up on a CPB-funded job at WNJC-FM, a public radio station affiliated with a junior college. WNJC had hired a black woman as program director. When the two CPB staffers got to the station, they asked for the p.d.

That “colored girl,” Romania Jones, told Current that her treatment at the station improved after Oliver-Velez’s visit. Jones has spent more than 20 years at WKNO-FM in Cordova, Tenn., where she currently works as a staff announcer.

Oliver-Velez takes pride in what the Minority and Women’s Training Program at CPB accomplished.

“A lot of people turn [the television] off when it’s time for the credits,” she said. “I don’t, because I’m still seeing people who were original recipients of training grants from our office.” 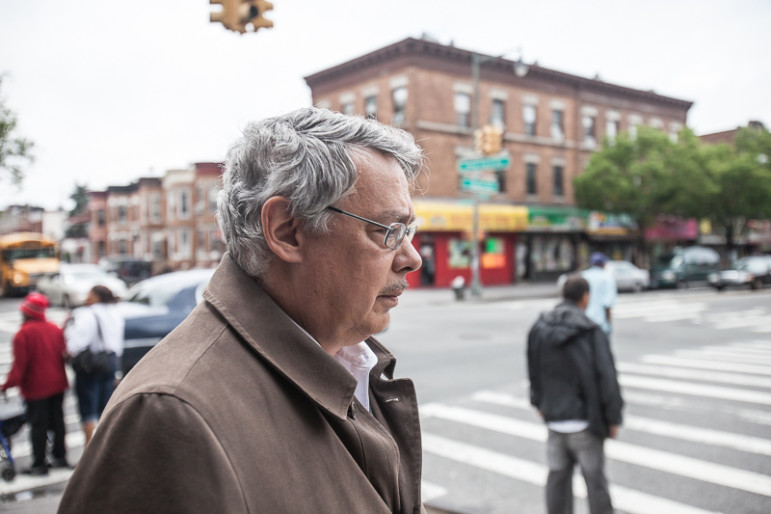 Of all the Young Lords who went on to careers in journalism and the media, none has had the impact of Juan Gonzalez of Democracy Now!, who has worked as a columnist at the New York Daily News since 1987.

Gonzalez’s resume as an activist includes a stint as a leader of the student revolt at Columbia University in 1968 and as both the Minister of Health and Minister of Defense for the Young Lords. The Lords had a weekly radio show, Palante, on Pacifica’s WBAI-FM in New York. On an April 1970 episode, Gonzalez can be heard expressing support for an underground group in Puerto Rico that was bombing American businesses.

These days you won’t catch Gonzalez advocating anything quite so radical. If you saw him at his cubicle in the Daily News city room in lower Manhattan, dressed in a conservative business suit, you might surmise that his politics have mellowed. But the 67-year-old investigative reporter quickly puts the notion to rest.

“I still consider myself to have a revolutionary attitude and perspective,” he said. “I try to find out what it is that’s afflicting people.”

Gonzalez’s investigative reporting has won two Polk Awards, and he sees the charter-school movement as one of the great scandals of our time. His recent exposés have resulted in the firing of a public library executive who spent a fortune on a lavish office renovation and thwarted efforts by private schools to reserve city parks for their exclusive use. His editorial focus is consistent with one of the Young Lords’ demands: community control of public institutions.

When Gonzales served as president of the National Association of Hispanic Journalists, he got a former lawyer for the Young Lords to donate $100,000 to train Latinos as broadcast journalists. The former lawyer, Geraldo Rivera, had himself benefited from a training program for minority journalists at Columbia University that was funded by the Ford Foundation and directed by former CBS newsman Fred Friendly.

Rivera learned about that program from the Young Lords’ Minister of Information, Pablo Guzman, according to Guzman and Oliver-Velez. (Rivera could not be reached for comment.) Guzman said that two Puerto Rican reporters at the CBS affiliate in New York had urged him to apply as well, but he declined to do so. 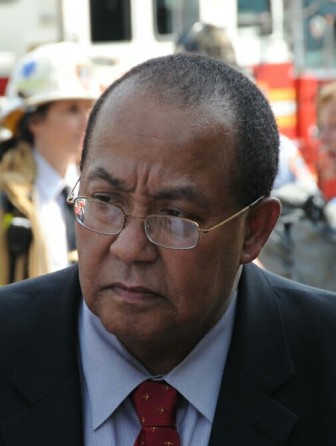 A self-described nerd of the South Bronx housing projects, Guzman had familiarized himself with the work of media theorist Marshall McLuhan. He is credited with orchestrating media coverage for Lords initiatives, including the takeover of a decrepit hospital in the South Bronx, the occupation of a church where they served free breakfasts and held a clothing drive, and a “garbage offensive,” in which they collected garbage in the East Harlem neighborhood and burned it in the streets when the city didn’t collect it, causing major traffic jams.

After Guzman finished serving nine months in federal prison for draft resistance, he went on to work as both a DJ and talk show host at commercial radio stations in New York. His appointment in 1977 as program director at WBAI triggered a revolt by staff who feared he would commercialize the station. Amid the dispute, the station went silent for two months.

Later that year, Guzman began his TV career. He’s been on and off the air at three local TV stations, including the Fox flagship outlet, which he described as being run by “Australian buccaneers.” Guzman most recently reported for WCBS-TV.

Guzman ended up on the law-enforcement beat and has extensive experience covering the Mafia. He has said that two uncles on his father’s side of the family were Cuban mob associates in East Harlem.

“Who would have envisioned me becoming a guy on the law-enforcement beat?” he said. “It was because of the Young Lords that I developed those contacts. I would get stuff from FBI agents who used to surveil us. And from Secret Service, too.”

One Secret Service agent Guzman interviewed for a TV story introduced him to another agent who infiltrated the Lords when the group was advocating armed struggle in the 1970s. The group’s logo featured an automatic rifle, but none of the Lords is known to have used the weapon.

Another member of the Young Lords became a television reporter. Felipe Luciano won a local Emmy for a report on life in the city jail on Rikers Island.

Luciano made a bigger splash hosting Latin Roots, a show on the now-defunct noncommercial WRVR-FM, where he gave Tito Puente, Eddie Palmieri and Celia Cruz their first sustained airplay in New York. But he mixed political advocacy with the salsa soundtrack and was fired after three years.

“I’d talk about the music and then throw out the political ideology,” he said of the Latin Roots broadcasts. “I vowed that if I ever got on the air, I would speak as truthfully, as honestly, as incisively as I could about our condition. And I did that on the air.”

Asked if he still considers himself to be a revolutionary of sorts, Luciano answers without hesitation, “Absolutely.” Luciano now runs the municipal TV station in Newark, N.J., a job he got in part thanks to a connection with another revolutionary, the late poet and playwright Amiri Baraka. Luciano remembers hanging out with Amiri Baraka when his son Ras was a toddler running around in Pampers. Today, Ras is Newark’s mayor.

Many former Young Lords have gone on to careers that stop short of revolutionary activity but have allowed them to continue pressing for changes in society. Their ranks include a union organizer, a family court judge, a state representative in Massachusetts, a member of the Philadelphia city council and a lawyer for Children’s Television Workshop who now runs a publishing company.

An extended feature about the Young Lords aired Sept. 11 on NPR’s Latino USA.