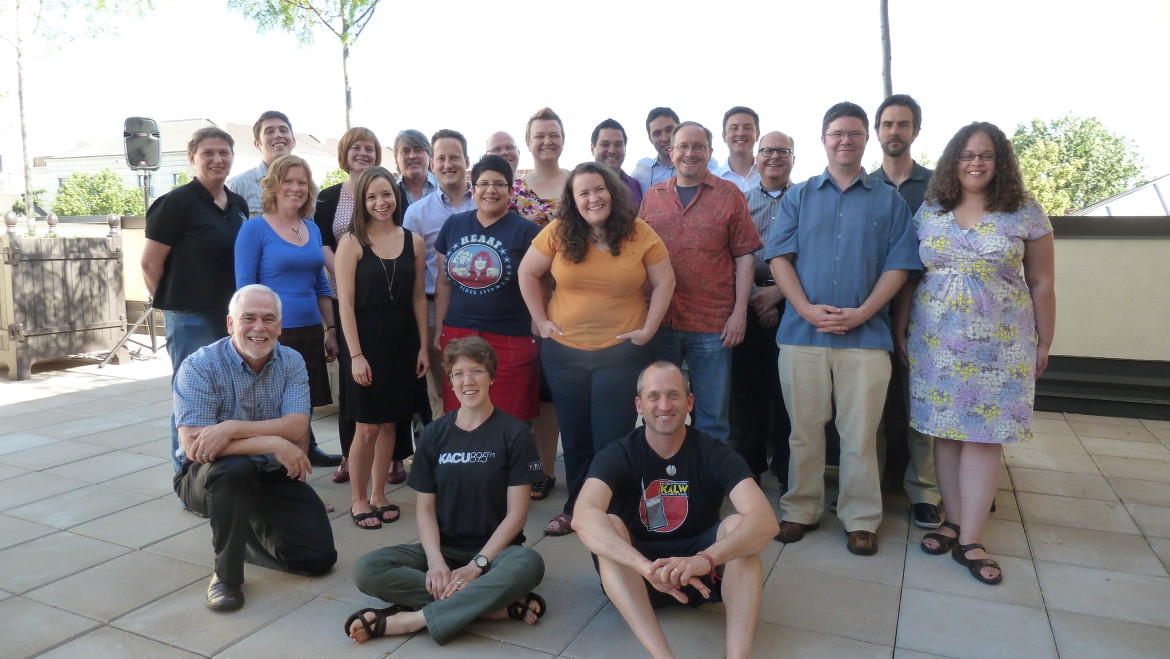 Reaves (fifth from left in back row) and his colleagues in the News Management Training at the PRNDI conference. 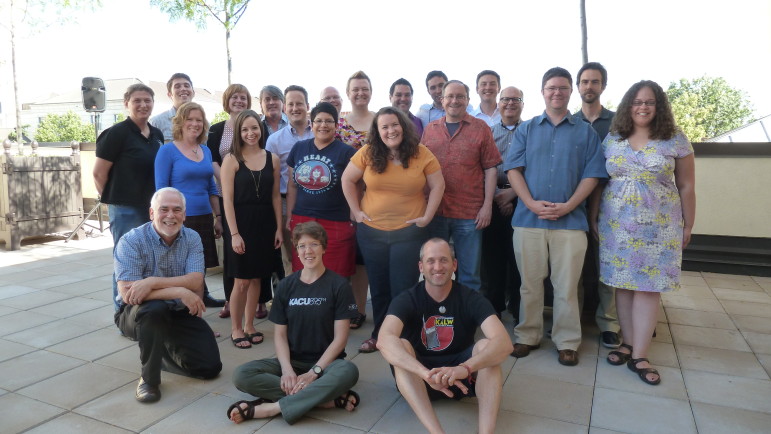 Reaves (fifth from left in back row) and his colleagues in the News Management Training at the PRNDI conference.

This year’s Public Radio News Directors Conference in Salt Lake City gave me a lot of ideas for how to improve news coverage across multiple platforms, including radio. It was my first PRNDI conference and the best conference I’ve attended.

First off, a bit about me. I work at KASU, an NPR member station on the campus of Arkansas State University in Jonesboro, Ark. KASU is oldest public radio station in the state. It has been on the air since 1957 and was the first public radio station in the state to air NPR programs, such as All Things Considered and Morning Edition. We have six full-time staff members and four part-time workers, as well as several volunteers who host music programs.

I’ve always had an interest in radio. I started my first job in broadcasting in 1993 as a jock at a 1,000-watt AM commercial radio station in the small town of Osceola, Ark. It was a great training ground that helped me when I went to Arkansas State University, where I completed a bachelor’s degree in radio and TV news in 1996. I moved to Stuttgart, Ark., and worked as the radio news director for commercial radio stations in that community, which covered five counties in the region. As a one-man news department, I covered news, sports, weather and other beats for 16 years. 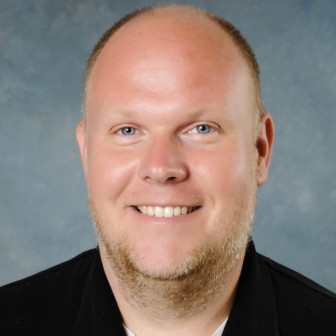 Of course, commercial news delivers spot coverage and low-tier features that differ from the journalism expected from NPR and its member stations. Adapting to public radio’s standards was a huge change for me when I started working at KASU in October 2011. I moved my wife, Jennifer, and daughter, Emily, to Jonesboro and started working at the station while studying for a master’s degree in mass communication at Arkansas State.

Since October 2011, I have worked as the station’s Morning Edition producer and reporter. Our news director, Greg Chance, passed away in April, and the news department has since been a one-person operation. While that is expected to change soon, I knew I would need to get training on how to establish a new news vision for myself and to help the station craft a new direction for its future journalism. That would include reaching audiences across different platforms, from traditional broadcast to web, social media, podcasts and more.

After talking to news staff at KUAR in Little Rock and hearing how they had learned a lot at PRNDI conferences, our station decided that KASU should join PRNDI and attend this year’s conference. I also took part in the two-day News Management Training before the conference, conducted by Judith Smelser and Michael Marcotte. Their advice about how to implement a strategic plan, develop a 100-day action plan and craft stories that make an impact was just what I needed. I wish I’d had this training before I started working at KASU, but I am thankful that I went through it.

The training covered what news managers do, crafting a news vision, setting coverage priorities, developing collaborations and partnerships, the challenges news managers face, editing, ethics, handling stress and more. As I am working on reporting features for KASU, I am realizing how this training has already helped me. Worksheets from the session outlined how to approach feature reporting instead of just starting on reporting a story without a plan. Tools such as Trello or Google Docs can be used to help other reporters who join KASU in the near future, allowing for constant communication about which reporters are working on certain stories. The trackers can keep reporters accountable for their tasks, as well as expected run times and air dates.

A session training about multimedia workflow helped us look at the best ways to deliver information to digital audiences. For me, the most valuable part of the training was learning how to shift from the newsgathering process I learned in commercial radio to public radio’s practices. While I worked in commercial radio news, I gathered news from police reports, summaries of fatal car crashes, local government meetings, and following an “If it bleeds, it leads” mentality.

In public radio, I am seeking out stories that make an impact in the communities we serve. In commercial radio news, I knew that the events I covered didn’t affect everyone. For public radio, I am looking for stories that matter to everyone, in areas such as the economy, health, education and justice. The main question I ask when I am working on a story now is, why should the audience care about my story? My goal is to answer that question when I am gathering interviews and information for a story. Learning from other trainees about what they were doing at their stations was also a huge help.

Other pre sessions focused on using social media to help with coverage. Kelsey Proud from St. Louis Public Radio joined us to talk about how her station used social media in last summer’s coverage of the Michael Brown shooting in Ferguson, Mo. When the shooting happened, they started monitoring social media and found that most conversations about the shooting were taking place on Twitter. They started tweeting information the shooting and providing additional information using specific hashtags. By using this strategy, they were able to engage current and future listeners in the conversation and were able to reach out to people who had never heard of St. Louis Public Radio.

They also joined with NPR to host two community forums about the shooting, which provided additional opportunities to bring listeners to the station, and they posted frequent updates and detailed features on their website. That included all of the testimony from the grand jury that reviewed the evidence, as well as other text-heavy information, and they promoted all of this on social media. That gave me ideas about how to best use social media and our website for giving listeners needed information.

Among the changes constantly under way, delivering local news that attracts and engages audiences across multiple platforms is a challenge. Some stations, such as West Virginia Public Broadcasting, have developed a model of putting stories on their websites first, then social media, and then radio. A session about podcasting looked at how stations are using podcasting for their newscasts and other shows to try to meet the digital demands of today’s audiences.

Speakers also discussed the importance of collaboration, both among member stations and with NPR. NPR President and CEO Jarl Mohn and Senior Vice President for News Mike Oreskes both emphasized that such collaboration will help foster better journalism. The partnership has already benefited audiences by providing listeners with captivating and engaging news features. Bringing audiences into the conversation through social media is an extra benefit that can help attract future listeners.

Statewide collaborations among member stations was also emphasized. For example, in Arkansas, KUAR in Little Rock launched a cooperative FTP site. Today, this effort allows KUAR, KASU, KUAF in Fayetteville and KTXK in Texarkana, Texas, to share stories and audio with each other. This allows listeners across the state to hear what is happening in all corners of Arkansas. Other public radio stations across the nation are involved with similar collaborations. All of these stations working together, and with NPR, can create powerful partnerships that ultimately benefit listeners.

During the conference, I was able to talk with attendees from member stations across the country. Some were attending for the first time, like me. But many others had attended for years and said that this year’s conference was the best. They cited the emphasis on multimedia tools, social media and collaboration, and said that the breakout sessions were a great complement to the main sessions. I agree — experts who presented at sessions gave practical advice on how to implement what they are doing at local stations.

I also enjoyed meeting so many wonderful people from stations all across the U.S. I made 20 new friends in News Management Training and countless more during the conference, and I also met NPR’s Korva Coleman. It was great to be able to share ideas and learn what other stations are doing. I can now incorporate some of these ideas into my 100-day action plan currently under way.

I am pleased that I was able to attend this conference. I would highly recommend the News Management Training for all news managers and news directors, as well as the conference overall for the latest in trends and engaging audiences.

2 thoughts on “Notes from a first-time PRNDI attendee”