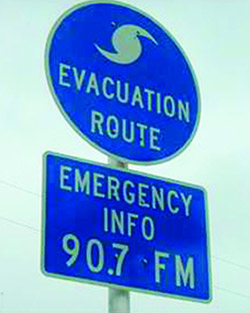 Under an emergency management partnership in Florida, road signs along evacuation routes point travellers to public radio frequencies where they can tune in for the latest updates. (Photo: Association of Public Media in Florida)

Public broadcasting’s advocates have been making a new case to shore up state subsidies by talking up the important role that stations play in supporting emergency management agencies.

When disasters hit, state emergency management officials in Florida, Nevada and elsewhere can tap into public radio and public television communications systems that are more reliable than cellular networks to deliver messages to the public and first responders. Some pubcasters, such as Vegas PBS, even devote bandwidth to emergency responders during crises and provide multimedia data like blueprints, photos and videos.

Pubcasters are promoting the value of such services to state legislators as part of a multipronged effort to justify tax-based investments in their stations. So far the advocacy strategy has proven persuasive in Indiana and Florida, where lawmakers have restored funding to public media, according to Patrick Butler, president of the Association of Public Television Stations. In Alabama and Mississippi, pubcasters have credited their emergency management programs for helping to maintain or increase state funding.

While traditional advocacy promoting public TV’s educational benefits continues to resonate with legislators, in recent years pubcasters have stepped up to educate lawmakers about less visible roles that stations can play in their communities.

“This is a different story than we’ve told in the past, when it was about the high quality of the material,” Butler said. “It’s still high quality, but what we do in public television now goes so far beyond TV programming that we’re glad to be able to tell it. And we’re seeing results from this case that we’re making.”

In Indiana, Gov. Mike Pence reinstated a portion of government funding to public broadcasters in 2014; his proposed 2015–2016 budget included $3 million for public television and $357,000 for public radio stations in the state.

Previously, Pence had targeted public media for cuts. “Gov. Pence led the opposition in 2005 and sought to have funding zeroed out,” Butler said. But, since his 2013 inauguration as governor, “he’s become a champion of public broadcasting.”

“It’s a different conversation we’re having now,” Butler added. “There were people we might have given up on a few years ago, and now we’re not having to give up on anybody.”

Radio stations’ involvement in emergency management services influenced that decision, said Janyth Righter, executive director of the Association of Public Media in Florida. The association organized the Florida Public Radio Emergency Management Network, a collaboration of 13 public radio stations that reach 99 percent of Florida’s population during emergencies. Road signs along the state’s evacuation routes feature tune-in information about Florida’s pubradio stations, ensuring that travelers will know where to turn for information during emergencies.

“When we started to talk about the importance of what we offer, and how inexpensive it is compared to other technologies, they really thought it was a good use of state money to keep this strong,” Righter said.

In Alabama, Gov. Robert Bentley proposed to increase state funding to the state’s public network by $204,750 to $6.05 million. And, after facing a steep cut in its state appropriation earlier this year, Mississippi Public Broadcasting is now on track for level funding in the upcoming budget cycle.

APTS has organized a public safety coalition to help stations make a funding case based on emergency management services to their state legislators.

“This has accelerated as a mission for public TV,” Butler said. “We provide a lot of infrastructure [that state agencies would] otherwise have to build, and that makes the argument a lot more powerful when you can show that return on investment.”

In Wisconsin, pubcasters plan to make the emergency management case to Gov. Scott Walker, who proposed a 34 percent cut in direct funding to Wisconsin Public Radio and Wisconsin Public Television earlier this year.

“We’re helping them make the same case that has worked in Alabama and elsewhere, and we’re hopeful the legislature and governor will embrace this investment as a worthwhile low-cost solution to problems,” Butler said.

Vegas PBS knows how important emergency management services can be in building relationships with state legislators. The pubcaster began working with state, county and local emergency officials since it converted to digital broadcasting eight years ago.

“We found that they had some significant challenges and we, as broadcasters, had some great solutions,” said Tom Axtell, g.m.

In the event of a school emergency, Vegas PBS can send blueprints, utility diagrams and even yearbook photos to authorities. If a school lockdown occurs, the station, which is licensed to the county school board, could provide additional information, including a list of students with food allergies.

“All of that is available as digital data that we can provide to first responders,” Axtell said. “And that is a very attractive resource.”

The station first used the network when a forest fire ignited outside Las Vegas; it provided a variety of information to first responders — blueprints for schools that were used as shelters, weather information and forecasts, and Google Earth images. The pubcaster also allocated a portion of its bandwidth to create a special PBS Kids channel so that children in shelters could watch TV.

“That story got around the state pretty quick,” Axtell said. “So we’ve been able to show what we can do and how we can help.”

Since Vegas PBS signals reach into rural areas, Axtell said, the station has been able to convince state policymakers to help cover its equipment-maintenance costs, making up for loss of federal Public Telecommunications Facilities Program funding.

“It becomes a good story about how public television is working with agencies in rural areas to get the job done,” Axtell said. “It hasn’t replaced PTFP, but we have received assistance in covering some of the costs. And we’ve not only had no resistance when we bring up funding, but there’s enthusiasm that the system be maintained.”