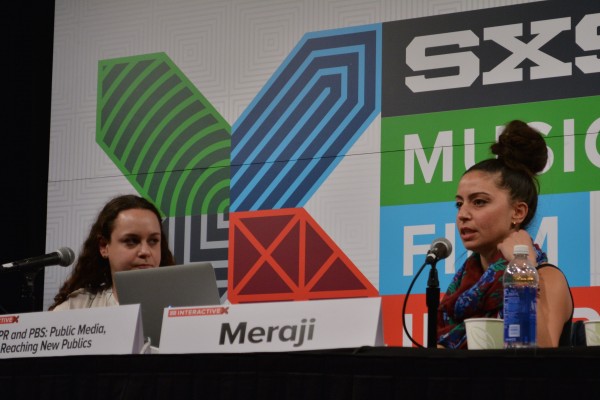 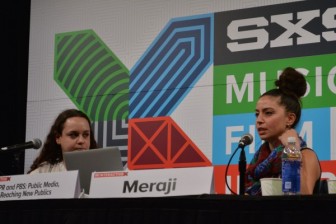 AUSTIN, Texas — Attendees at a Sunday panel at SXSW engaged in a frank discussion about how public media can better attract a younger and more racially diverse audience.

Saks told the crowd about the grant-funded Digital Studios arm of PBS, whose content is distributed via 60 YouTube channels. The division is trying to reach viewers who might have watched PBS as kids but are still younger than the 65-plus demographic that makes up much of the network’s audience.

“We’re targeting an audience that’s really 18 to 34,” Saks said, “which is a completely new and different audience for PBS.”

Meraji started her part of the discussion by playing a series of fast-paced clips from Code Switch stories. Launched in 2013, the multimedia unit covers issues of race, ethnicity and culture. Meraji then played introductions to the pieces delivered by hosts of NPR’s newsmagazines. The disparity in tone elicited a round of chuckles from the audience.

“Did you hear a difference there?” Meraji asked.

The disparity highlighted a shortcoming of public radio, she said, pointing out that the average NPR listener is a white, middle-aged male in the upper-middle class or above.“Our mission is to speak to the public, and we’re not doing that right now, obviously, with those demographics,” Meraji said.

The discussion then turned to revisiting the recent discussion about “public radio voice,” which originated with an essay by Chenjerai Kumanyika, an assistant professor of communication studies at Clemson University. In the essay, published on Transom and then Buzzfeed, Kumanyika said that while working on his public radio voice, he realized that the voice in his head sounded white, raising questions about cultural biases.

“His friends said, ‘I don’t listen to public radio because it sounds like a bunch of middle age white guys who just drank warm coffee,’” Meraji said.

Meraji saw firsthand the challenges of bridging such gaps, she said, when she worked on the former NPR show Day to Day, canceled in 2009. The show started out with the best intentions of attracting a younger and more diverse audience, she said. But as time passed, the show’s staff felt pressured to conform to the dominant public radio voice, and the show started to lose its way.

“There is a lot of passion around diversifying the audience and trying to get younger people to listen,” Meraji said. “But I think it’s a lot scarier to seriously do it.”

Saks said PBS Digital Studios also ran into opposition in its early days. The unit needed to create its own web content because rights issues limited its use of PBS’s TV programming. It encountered pushback when it decided to publish to YouTube instead of using a PBS digital player.

“We had to fight a real battle,” she said. “Once we wanted to take it off the owned and operated platform and put it out into the wild, people got really scared that we might mess up the brand or we wouldn’t be able to control comments or what was being seen with it.” But PBSDS’s videos went on to get significant traffic on the YouTube platform.

Saks and Meraji advised attendees who wanted to draw a younger audience to consider whether their content jibes with the platform they’re using before uploading it. Saks recommended that stations scan YouTube and Instagram for content they like and try to emulate it. Many producers assume content will appeal equally anywhere regardless of platform.

“So they think TV content will work no matter what platform you put it on, and that’s simply not true,” Saks said.

“Don’t try to shoehorn a video into a place where it doesn’t fit,” she added.

Meraji also recommended that producers consider their intended audience. “If you want to reach an 18-to-34 demographic,” she said, “have the people who are in the video be of that demographic.”

That advice drew a round of applause from the audience.

“We want to be authentic,” Meraji said. “Authenticity is your best bet.”