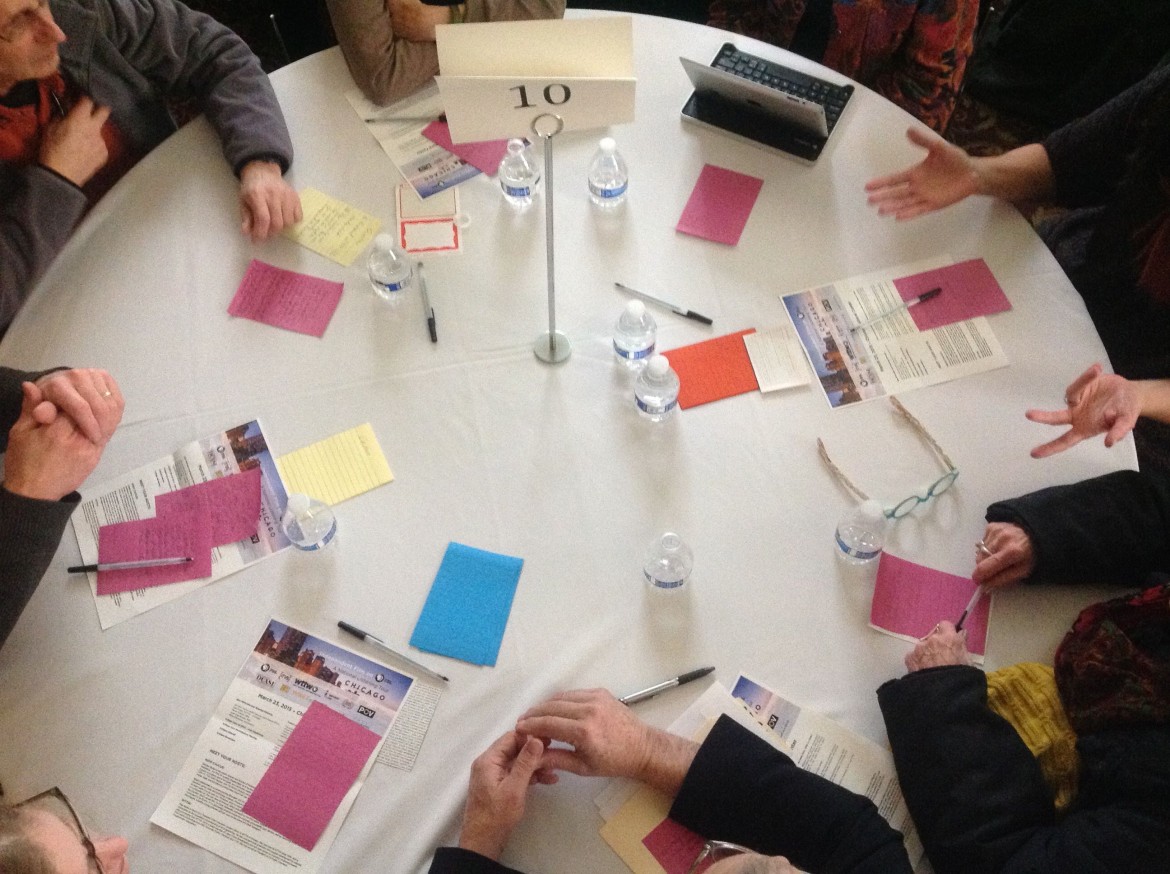 Participants at a PBS listening tour event discuss the future of independent documentaries on the network. (Photos: Bill Stamets)

CHICAGO — The final stop of PBS’s series of discussions with independent filmmakers replaced the rant-at-the-mic format of earlier events by assembling members of Chicago’s film community into groups and encouraging them to listen to one another.

Many participants called on PBS to look at alternative digital platforms and to expand its use of social media to promote independent film. Floyd Webb, a filmmaker who directs Chicago’s Black World Cinema Series, recommended that PBS create a Roku channel to present select indie programming.

The meeting was the third in a series on what PBS can do to raise the profile of independent film in its national schedule. At the center of the talks are Independent Lens and POV, two series that showcase nonfiction programs from independent producers. The programs share a Monday 10 p.m. timeslot on PBS’s national feed, and a proposal by New York City’s WNET to move the series out of prime time on its primary station set off heated and extended talks over public TV’s commitment to independent film.

At listening tour events and other conferences convened since January, filmmakers have been pressuring PBS to designate the series for common carriage. But, as a PBS executive said during last week’s South by Southwest Film Festival, such a move could prompt local stations to drop the shows from their schedules. 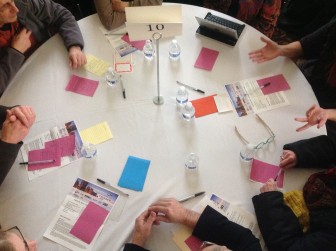 Participants at a PBS listening tour event discuss the future of independent documentaries on the network. (Photos: Bill Stamets)

For the Chicago event, tour organizers tapped Juan Sepúlveda, PBS senior v.p. of station services, to lead participants through a meeting format that PBS has used internally. He described it as a Native American “kiva,” which invites participants to discuss ideas amongst themselves while collecting a record of what is said.

“You don’t get to do much talking in those listening tours, right?” said Sepúlveda. “So we really wanted to make sure to turn it over to you today so we get a chance to hear from each one of you at your tables.”

Organizers set up 25 tables that were supplied with tablets in three colors. After participants settled in, Sepúlveda invited six people to speak on an issue selected by PBS. “This is to get the conversation started,” he coached.

The first topic was “placing independent film on the national schedule.” Each panelist spoke for one minute and later took another 60 seconds to respond to others’ remarks. To applause, they returned to their respective tables, where discussions continued in smaller groups. Participants were told to turn in their notes afterwards; PBS representatives were to take them back to headquarters in Crystal City, Va.

This process was repeated twice, with six new panelists stepping to the stage to respond to the next PBS-picked topic. These included successful promotion and marketing strategies for Independent Lens and POV and distribution opportunities beyond broadcast.

In each of the “conversation-starter” panels, speakers described their own experiences with presenting documentary film on public TV or building community outreach around their films.

One unsigned note that was turned into PBS read: “Make the content appeal to people that are under 40 and not necessarily white.” Another asked, “How can emerging filmmakers maintain their unique voice and still be ‘marketable’ to the PBS audience?”

Bob Hercules, director of an American Masters documentary about the Joffrey Ballet, asked PBS to help independent producers identify outreach partners who can help build awareness and community dialogues around films, according to an email summarizing one of his notes from the meeting.

In an attempt to trigger debate among participants, Joe Winston, director of the 2009 documentary What’s the Matter with Kansas?, proposed an admittedly “completely ridiculous and absurd” notion: “My pitch is that PBS should cancel Independent Lens and cancel POV and . . . replace them with the same number of hours of curated independent films organized differently.” For instance, Tuesdays would feature “hard-hitting documentaries,” Wednesdays “nature programs” and so on. 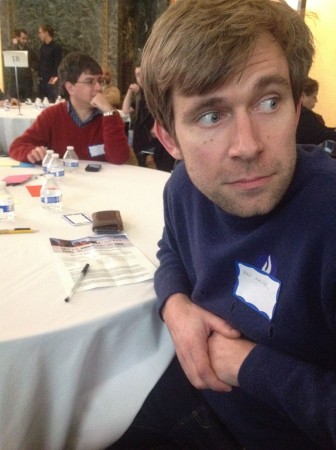 Filmmaker Ben Kolak argued that high-school students could learn to appreciate documentary films if exposed to them.

Filmmaker Ben Kolak differed, noting that both series have built valuable “brands.” He proposed that PBS programmers adopt more of a film-festival approach in curating the series.

He suggested that high school students could learn to appreciate documentary films such as Hoop Dreams if they’re exposed to them in class. After all, many students who encounter Jane Austen’s novels at a young impressionable age become fans of British drama.

Director Steve James, whose documentaries Hoop Dreams, The New Americans and The Interrupters have been featured on PBS, called for more emphasis on outreach and marketing via social media.

Some participants said they felt they’d participated in a focus group, not a forum.

Gordon Quinn, artistic director of Kartemquin Films and a leader of the Indie Caucus group that co-sponsored the Chicago event, credited PBS for the kiva format. “It was their idea, really,” he said. “We knew we wanted to do something different in Chicago, and they suggested this. We had the more confrontational meetings, and we’re in serious negotiations now.”

Quinn was pleased with “the really free-flowing ideas” that circulated during the meeting.

The Indie Caucus has led the push for common carriage designations for Independent Lens and POV. In an interview with Chicago’s WBEZ-FM that aired the morning before the listening tour, Quinn said the proposal was still under discussion.

After the meeting concluded, he said, “It’s a real possibility. It’s not decided.”