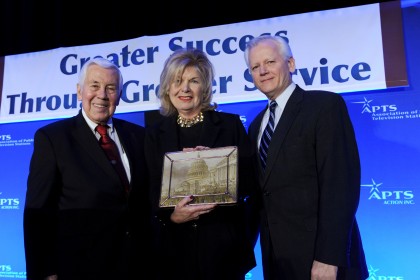 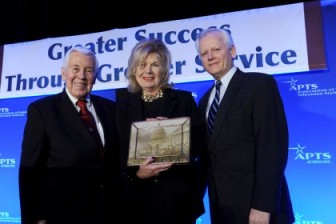 CPB recognized a pair of politicians for their support of public broadcasting during the annual Association of Public Television Stations Public Media Summit conference in Washington, D.C. on Feb. 22.

CPB presented former Sen. Richard G. Lugar with its Strengthening Civil Society Thought Leader Award. The award recognizes leaders who “affirm the essential services that public media provides to citizens in the areas of education, journalism, and the arts.”

“Sen. Lugar’s decades of service and leadership in promoting civil discourse globally and his continued support of access to high-quality media through public broadcasting have been invaluable to our country,” said CPB CEO Patricia Harrison.

Lugar was recognized for his contributions to public media over his career. As mayor of Indianapolis, he helped found what would become WFYI Public Media. In the Senate, Lugar was a regular supporter of maintaining funding for public broadcasting. During the APTS summit, CPB also recognized Rep. G.K. Butterfield (D-N.C.) with its American Graduate Champion Award, named for American Graduate, CPB’s anti-dropout initiative.

Butterfield received the award for “his commitment to quality education for every child and recognition of public media’s role in education and in the community.” Harrison said Butterfield partnered with North Carolina’s UNC-TV for American Graduate Day 2013 and was an active promoter of education.