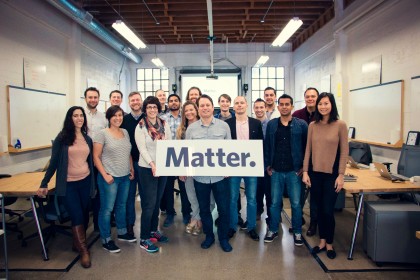 Matter CEO Corey Ford with the CEOs of the six ventures of Matter Four. (Photo: Matter)

Matter, the San Francisco–based media startup accelerator backed by Public Radio Exchange, KQED and the Knight Foundation, has announced the companies included in its newest class of six entrepreneurial ventures.

The six companies were culled from a total of 268 applicants, according to Corey Ford, c.e.o. of Matter and a former Frontline producer. The winning startups went through four rounds of interviews, pitches and mini-projects and best represented what Matter was looking for in media-focused startups, Ford said.

“I think you’re going to see that this class is dead-on about our mission,” Ford said.

Each startup gets $50,000 and five months to develop its project. In return, Matter takes equity stakes in the companies. The equity shares help ensure that everyone has a vested interest in the companies’ success, Ford said.

“It’s a good idea to have skin in the game, to align everyone’s interest,” he said. He declined to say how big the stakes are.

Matter’s new class began with a boot camp session in January. The remainder of the 20-week accelerator program leads up to a pair of demo days where they will showcase their efforts to potential investors, June 11 in San Francisco and June 16 in New York.

Matter Four will be the first class of startups to move through the incubator under its new structure. Earlier this week, Matter announced it had added as partners commercial media companies The Associated Press, McClatchy Co., A.H. Belo Corp. and Community Newspaper Holdings Inc. The companies will work with and mentor the startups during the five-month period.

The new arrangement is a shift from Matter’s public media–focused background. It was founded in 2012 as a partnership involving the Knight Foundation, San Francisco’s KQED and Public Radio Exchange. Prior to adopting the Matter name in 2012, it started as the Public Media Accelerator.

“Our plan never was to pursue just public media companies — I’m kind of agnostic about that,” Ford said. “It’s really about people. It’s not whether they came from public media or not, it’s about whether they’re worth supporting.”

One of Matter’s startups just made the transition from public to commercial media. Zeega, a startup from the first Matter class with roots in public radio, was purchased by BuzzFeed, the media company announced Thursday. Since its participation in Matter, Zeega had changed its name to GoPop.

Matter has graduated 19 companies in three classes over the past two years, and the majority of the graduates are faring well, Ford said.

“Almost all are going concerns, and many are going strong,” he said. “We lost one along the way, but that’s the nature of what we do.”