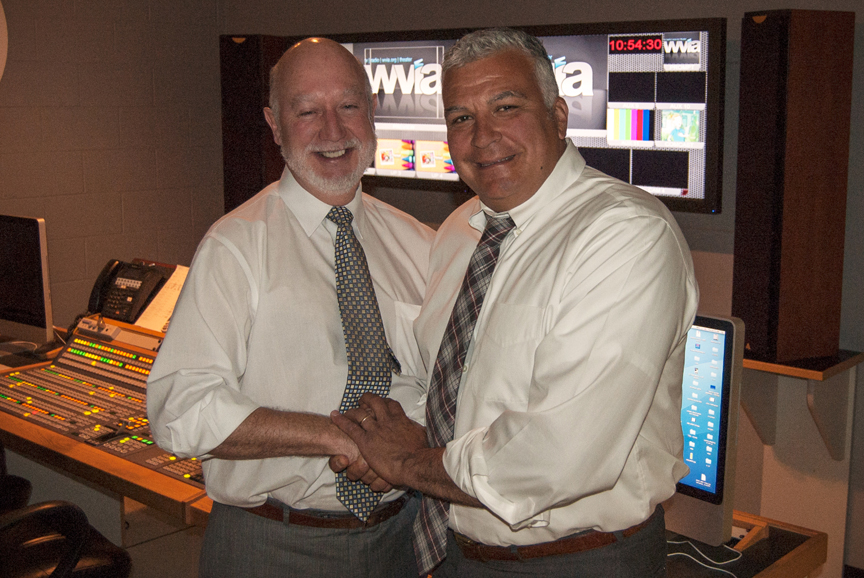 Bill Kelly, left, and Tom Currá celebrate their new roles in June 2013: Currá taking over as general manager, and Kelly starting to raise major gifts for the station. (Photo: WVIA) 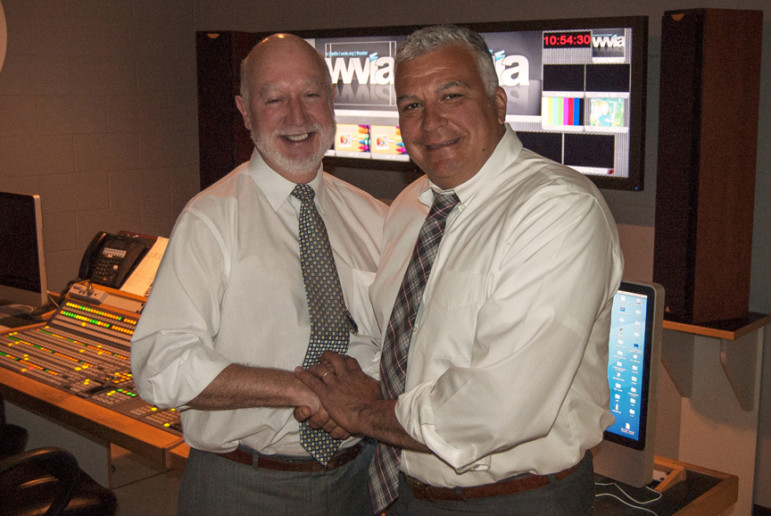 The board of WVIA Public Media in Pittston, Pa., has learned an expensive lesson about paying top execs: Beware of the public-relations fallout when long-term employees receive big payouts from deferred compensation plans.

To end months of controversy over WVIA’s payments to former president Bill Kelly in 2013, board members pitched in nearly $300,000 of their own money late last year to buy out the remainder of Kelly’s contract.

The decision to sever ties with Kelly came after a public backlash over his 2013 compensation package of $600,955, which included a $364,128 payment from a deferred compensation plan that matured when Kelly reached age 65.

When Kelly received that payout, in June 2013, he was moving into a new job as WVIA’s chief development officer, focusing on major gifts fundraising for the station’s endowment; Tom Currá, former e.v.p. and e.p., took over as station president.

The board approved the leadership transition, but it didn’t anticipate the outcry over a retention bonus offered to Kelly by a totally different board more than a decade ago.

After local press reported that Kelly did not take a pay cut in his new position — and was, in fact, making more money than Currá — donors rebelled, with thousands declining to renew long-running memberships.

WVIA lost 6,300 of its 15,000 members in one year, starting with the announcement of Kelly’s transition in June 2013. About 2,300 members who refused to renew specifically cited Kelly’s salary. Many members hung up on telemarketers soliciting donations by phone, a reaction unprecedented in the station’s history.

The board finally moved to contain the public relations debacle late last year. In a Jan. 9 letter first sent to members, which also ran in a local newspaper and on the station website, WVIA Chair Martin Walzer wrote that station members’ concerns were heard “and the board has taken corrective action to address this important issue.” Kelly had been removed from the payroll Dec. 31.

Board Vice-Chair Alex Fried told Current that directors unanimously agreed to contribute a total of $291,878 from their own pockets to buy out Kelly’s contract as development chief. Directors contributed varying amounts, Fried said, declining to discuss specifics.

The turmoil also inadvertently led the station to forge a development collaborative with two other Pennsylvania stations, WLVT in Bethlehem and WQLN in Erie, spearheaded by former PBS executive Joe Krushinsky. The restructuring has helped to stabilize fundraising: WVIA has already seen a 6 percent uptick in December revenues compared with last year, Krushinsky said, driven by success in a year-end mail appeal from the new, more streamlined development unit.

“The board has dealt with the issue decisively and seems to have taken the right steps to regain the public trust — and ultimately membership contributions,” said Virginia Dambach, a veteran public broadcasting development professional who is not affiliated with WVIA. The approach “should bring positive results over the coming months.”

Discussions about the leadership transition began in 2012, according to Kelly. During strategic planning sessions and other board meetings, Kelly proposed that he move into a new role cultivating major gifts for WVIA; he also recommended Currá to succeed him as president.

“I’d been president for 23 years, I’d been at the station for 40 years and I was feeling a little obsolete,” Kelly said. “I had mentored Tom over time. I came to believe that this was the right thing for WVIA because Tom was at the pinnacle of his energy and enthusiasm — a feeling I’d experienced 30 years earlier.”

Kelly also believed that the station would benefit if he drew on his community ties to raise money for the station’s endowment.

“The board saw it as a great opportunity” to build an endowment, Currá said. “I’m a real operations guy. With Bill, the fundraising work could really gel and put the station in a different place.”

“This was all well-intentioned and well-thought-out,” Fried said. “We just did not anticipate the reaction from our membership.”

Kelly expected to earn the same salary in his new role. After researching compensation of development officers, the board agreed to his request.

Although WVIA’s tax filings show that Kelly’s total annual compensation had averaged around $275,000 since 2005, during the recession he took a substantial pay cut. After Pennsylvania policymakers zeroed out funding for public broadcasting, in 2009, his salary was reduced 15 percent to adjust to the loss of state subsidies, which provided 18 percent of the station’s annual revenues. As Kelly prepared to step out of the presidency in FY13, his base salary was $212,201.

The board had calculated his yearly compensation based on CPB salary studies for pubcasting station executives in similar-sized markets with comparable budgets, Kelly said.

In 2013 the median salary for the top executive of a community joint licensee was $189,291, according to CPB salary reports.

The deferred compensation package that drew so much scrutiny to Kelly’s pay was from a different era. When the station was doing “exceptionally well” 15 years ago, Kelly said, the board chair approached him with a compensation offer that was designed as an incentive to retain him as station president until he reached retirement age. A sum was invested annually in the plan until he claimed the deferred pay and interest at age 65.

“That was not my idea,” Kelly said. “All I wanted was for them to buy a life insurance policy payable to the station that would cover the cost of a national search for my replacement if need be.” The board agreed to that but also added the deferred compensation “to make it increasingly painful for me to leave,” he said. “That was the board’s rationale, not mine.” None of the WVIA board directors who approved the retention incentive are involved in the station’s governance.

Such compensation approaches are fairly commonplace among both nonprofits and commercial firms, said Ken Cameron, director of compensation and benefits consulting at Chicago-based accounting and advisory firm Grant Thornton LLP and an expert on nonprofit compensation.

Many employees at tax-exempt organizations receive deferred compensation through a 403(b) account, the same as a 401(k) in the commercial world. Such retirement accounts are called “qualified plans.”

The supplemental plan offered to Kelly was different. It was a nonqualified plan, the type that is customized for top executives. They “can be a good way to attract, retain and engage executives to accomplish the mission of a not-for-profit organization,” Cameron said.

Since nonprofits typically can’t pay as much as private-sector companies, Cameron said, “a nonqualified plan is a nice component of a compensation package.”

Another advantage: Nonqualified plans don’t have the $18,000 annual contribution cap imposed on qualified plans such as 403(b) accounts. “For a high-level executive making $150,000 a year or more, $18,000 a year is not a lot,” he said. And a board can customize a nonqualified plan to fit the needs of the organization as well as the individual.

One drawback of such plans, Cameron said, is “optics.” A huge lump sum payment reported on an IRS Form 990 can be “problematic” for the organization, he said. And the total amount is immediately taxable to the individual receiving the payment.

Immediately after WVIA unveiled plans for its leadership transition, the public relations downsides to Kelly’s deferred compensation became apparent. Local talk radio hosts and print reporters checked the station’s most recent tax filings on the day of the announcement. The tax form reported Kelly’s total compensation of $600,955, which included the deferred compensation lump sum of $364,128. 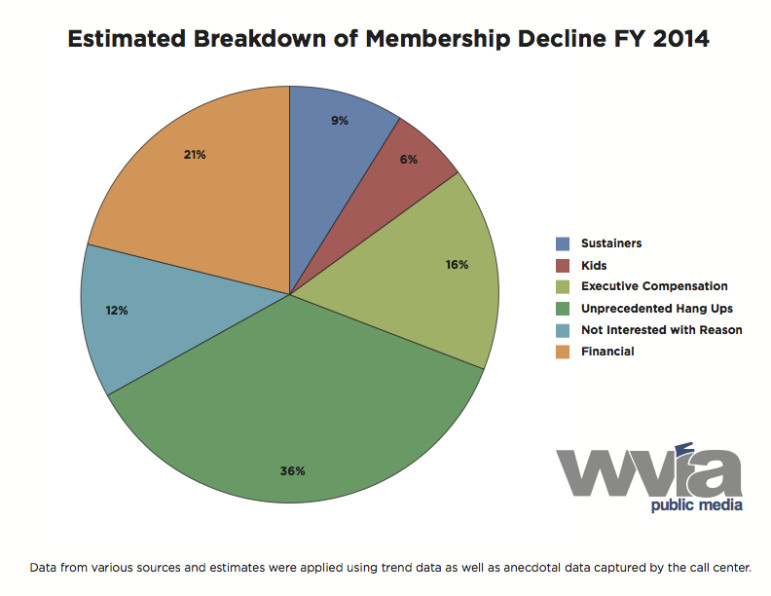 The WVIA staff prepared a chart to estimate the proportion of dollars lost in non-renewals from June 2013 to June 2014. The station estimates the decline, represented here, cost it around $400,000.

Compared with Scranton’s average annual household income of $38,463, as reported by the U.S. Census Bureau, the pay seemed way out of scale to local news outlets and residents. WVIA is in Nielsen’s 55th-largest television market, Wilkes Barre-Scranton-Hazelton, with 553,540 households. Its annual budget is around $5 million.

WILK Newsradio, the Times-Tribune and the Times Leader all reported on Kelly’s compensation. “It was a bloodbath of media coverage,” Kelly said.

That scrutiny came just as the station call center began a telemarketing campaign for membership renewals. The response of one in three members fell into a totally new category for WVIA’s fundraisers: “unprecedented hang-ups.”

“These were routine calls to five-, 10-, 15-, 20-year members,” said Currá — who didn’t discover the snubs until months later, when the station’s chief financial officer noticed a drop in revenue.

News of the hang-ups “was not getting out of the call center and into the front office,” Krushinsky said. “Obviously the finance office started to notice when the cash flow was being affected. By the time Tom pulled me in, member attrition was in the thousands.”

Other factors contributed to the sharp drop in renewals. “The economy is not doing well here,” Currá said. In addition, the station was introducing a sustainer membership program, which initially creates a cash-flow crunch, and pledge fundraising around kids’ programming was dropping off, he said. “It was a perfect storm.”

Help from the outside

At a general mangers’ meeting in the fall of 2013, Currá confided to PBS President Paula Kerger about WVIA’s struggles. According to Currá, Kerger put him in touch with Krushinsky, then PBS’s director of station development services. Krushinsky agreed to “take a look under the hood,” Currá said.

During an initial station visit, “I had a candid conversation about what I saw and didn’t see in the membership program,” Krushinsky said. The station had been running on revenues from its on-air pledge drives, making it especially vulnerable to the drop-off in viewers’ contributions.

At Currá’s request, Krushinsky stepped in to help turn things around, working with the station as a consultant.

“I was happy to do that,” Krushinsky said. “I missed hands-on involvement from my previous station life,” which included development stints at Maryland Public Television, New Jersey Public Broadcasting and WITF in Harrisburg, Pa.

Krushinsky later laid out plans to restructure development operations into a collaborative with two other Pennsylvania pubcasters. In August 2014 he left PBS and signed on full time to oversee that initiative.

Through the collaborative, WVIA has taken over a low-volume call center operated by WLVT, and the three stations also cooperated to produce a year-end gift appeal. “Results were solid — it was a good December,” Krushinsky said.

But the issue of Kelly’s continued employment at WVIA didn’t go away.

After extensive talks into 2014 about how to address the problem, the board agreed on three objectives, Fried said: to meet its legal obligation to Kelly, “a 40-year employee who provided decades of excellent service”; to acknowledge that the station unintentionally hurt its membership; and to publicly correct the situation.

A proposal to raise money from all 16 board members to buy out the remainder of Kelly’s contract met all three objectives, Fried said. “It also shows how much we as a board love this station. And, frankly, we took some of our own responsibility in the matter,” because the board had agreed to the management transition with Kelly keeping his full salary.

Board members collected the $291,878 payout before Christmas, according to Currá.

When Kelly learned of the board’s buyout offer, he said, “I felt melancholy — that’s probably the best word.”

Turning down the money for the remaining years of his contract wasn’t an option. “I am twice-divorced and retirement age,” Kelly said. “It literally came down to the fact that I don’t believe I am financially capable of just walking away.” He hopes to continue working as a consultant.

“It really pains me to be perceived by some people — including on the staff, which I largely hired — as greedy,” Kelly added. “That’s not a pleasant place to be. I am nothing but grateful, and that’s the absolute truth.”