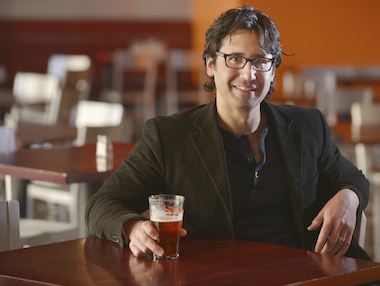 Today we’re excited to raise a glass and toast the launch of our first podcast, The Pub. With new episodes posted every Thursday, The Pub will use our coverage of public media as a starting point for thought-provoking conversation and commentary, hosted by popular Current contributor Adam Ragusea.

Our first episode features an interview with Canadian podcaster Jesse Brown, who helped break the news of Canadian Broadcasting Corp. host Jian Ghomeshi’s alleged history of sexual assaults. You can find new episodes of The Pub here every week and on SoundCloud and Libsyn. you can “Subscribe to Podcast” in iTunes and use the link “http://currentpubmedia.libsyn.com/rss” (UPDATE: It’s now in the iTunes Store.)

We’ve talked about launching a podcast for some time, but who would host it? The answer came to us after Adam approached us last year with ideas for a few commentaries, which quickly proved to be a hit with our readers. Not only is Adam a funny and engaging writer, he’s also an experienced radio host and producer, making him an ideal anchor for The Pub.

“I think the name The Pub really gets at what we want to create — like a bunch of colleagues, all out for a well-earned beer at the end of a tough week, talking shop, maybe getting a little rambunctious,” Adam says. We hope you enjoy listening to The Pub as much as we’ve enjoyed putting it together.

Look for these features on upcoming episodes:

Adam is Journalist in Residence and Visiting Assistant Professor of Journalism at the Center for Collaborative Journalism at Mercer University in Macon, Ga. He’s also reported for public radio shows including Morning Edition, All Things Considered, Here & Now, Marketplace and The Takeaway. Before becoming a journalist, Adam studied music composition, and he creates all the music for The Pub.