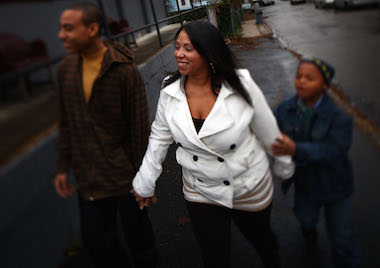 Out of 420 entries from 13 countries, Radio Diaries won the Gold at the 14th annual Third Coast Richard H. Driehaus Foundation competition honoring the best audio documentaries of the year.

The top winning entry was Teenage Diaries Revisited – Melissa’s Story, produced by Joe Richman and Sarah Kate Kramer of Radio Diaries and broadcast on NPR’s All Things Considered. It follows the life of Melissa Rodriguez, who participated in the 1996 series of Teenage Diaries as a young mother, and chronicles her life since then with her son, now a teenager himself.

Producer Emily Hsaio of Transom Story Workshop took the bronze for Leaving a Mark, in which Hsaio meets a man who wants to remove his swastika tattoo.

Two documentaries shared the director’s choice award. Colin McNulty of Whistledown Productions and BBC Radio 4 won for his Burroughs at 100, a portrait of the American author William S. Burroughs. State of the Re:Union, the public radio series distributed by NPR and Public Radio Exchange, won for The Hospital Always Wins by Laura Starecheski. Edited by Deborah George and Taki Telonidis, it focuses on Issa Ibrahim, a patient at a mental hospital in Queens, N.Y.

Winning entries in other categories include:

This year’s competition featured the first-ever presentation of the Little Mermaid award, created by This American Life’s Ira Glass to reward stories that are “both beautifully crafted and entertaining.” Two audio pieces were recognized: 100 Songs in a Day, produced by PJ Vogt and Alex Goldman for the TLDR podcast; and Chicago to Mexico, by Bus, a story of a long journey on a coach bus. It was produced by Linda Lutton and edited by Cate Cahan for Chicago’s WBEZ.

Winners will receive cash awards ranging from $1,000-$4,000. Their stories will be made available to a national audience in Best of the Best: The 2014 Third Coast Festival Broadcast, distributed by the Public Radio Exchange.

Listen to all the winners here.

Arizona State University inducted the general manager of Eight, Arizona PBS, Kelly McCullough, into the Alumni Hall of Fame for the Walter Cronkite School of Journalism and Mass Communication.

McCullough studied broadcast management at the Cronkite school and graduated in 1982. He has worked at Eight, Arizona for 30 years, initially working in fundraising TV production. He became general manager in 2008.

As the 46th inductee into the Cronkite Hall of Fame, he joins other notable graduates including CNN International’s Becky Anderson and Pulitzer Prize–winning reporter Julie Cart of the Los Angeles Times.

Haddock received the award for her work in bringing diverse programming to public television and her support of black filmmakers. While working for NBPC, she helped support features by notable filmmakers Stanley Nelson and Julie Dash.

Reel Sisters is a film festival and lecture series based in Brooklyn, N.Y., that supports programming created by women of color. It was founded by African Voices magazine and the Brooklyn campus of Long Island University.

CATV47, a television station of the Cheyenne and Arapaho Tribes, won the Big Bird Partnership Award for its contribution to Native Oklahoma. The 30-minute TV show about Oklahoma’s 39 indigenous tribes featured stories created and produced by the tribes.

“CATV47 has gained knowledge of the different cultures as each tribe gave a little bit of their story,” said station director Randy Burleson. Tribes that have contributed so far include the Cheyenne, Arapaho, Osage, Cherokee, Choctaw, Ponca and Kiowa. The second episode of Native Oklahoma airs next month, focusing on Vietnam veterans within the tribes.

AMERICAN ACADEMY OF ARTS AND SCIENCES

Kling signs the American Academy of Arts and Sciences’ Book of Members, a tradition that dates back to 1780.

The American Academy of Arts and Sciences inducted Bill Kling, founder and president emeritus of American Public Media Group, in a ceremony Oct. 11.

“The distinguished women and men who were inducted this weekend have engaged in innovative research, examined every aspect of our society and continue to pursue solutions to the most pressing challenges of the day,” Jonathan Fanton, president of the academy, said. The American Academy was founded in 1780 and is among the oldest honorary societies.

Salt Lake City’s KUED brought home two awards each for its programs Courthouse and Return of the Wolves: The Next Chapter. Another program, The Candy Bomber, won an award in the nostalgia program – program/special category.