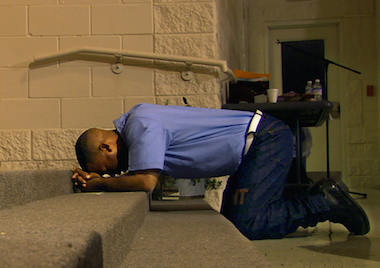 Faith in the Big House, a film that explores religious conversion during incarceration, began as a very different documentary.

Anthony Robinson, an inmate who participated in Faith in the Big House, prays in the chapel at Elayn Hunt Correctional Center. (Photo: Interlock Media)

Director Jonathan Schwartz edited the documentary as an inside look at the religious retreats, and had taken it on the festival circuit when Jason Viso, program director at Louisiana Public Broadcasting, asked him to consider a different treatment and storytelling approach for broadcast on public television.

Viso envisioned a broader film with more context about Louisiana’s prison system. Evangelical ministries have stepped up their prison outreach nationwide, Viso said, and are increasingly handling corrections programs lost in budget cuts. They offer the programs at no charge to taxpayers and insist their work is lowering recidivism.

In discussing how to adapt the documentary for public TV, Viso proposed a “radical reconstruction,” Schwartz recalled. The filmmaker agreed to undertake it. “If you watch the two films back-to-back, they’re totally different.”

The documentary that emerged from their collaboration is a narrated film focusing on five prisoners as their lives are changed by religious conversion. It includes a music soundtrack and historical background on prison ministries through the decades. Schwartz also added probing interviews with experts, including the late Charles Colson, a Watergate co-conspirator and founder of Prison Fellowship Ministries. Such faith-based groups increasingly provide not only religious programming to convicts but also turnkey services such as drug counseling and GED preparation.

Schwartz became interested in religious programs in prisons during production of Turned Out: Sexual Assault Behind Bars. Schwartz began that 2004 film with initial support from CPB and the Independent Television Service, he said, but parted ways to complete it. The documentary became a “significant” film about prison rape, he said.

During filming of Turned Out, Schwartz was struck by the different dynamics of prison life for religious inmates. Those who were perceived by other prisoners as being sincerely devout “kind of floated above the violent hierarchies of prison life.” Religious convicts also received perks from wardens and chaplains: a better cell, hot water, more palatable food or an air conditioner.

For some inmates, their conversions were temporary. “They’re ‘born again’ for three weeks,” Schwartz said. “They’re young guys, searching, just flopping around to see what fits.”

In preparing to film Faith in the Big House, Schwartz went through weeks of evangelical Christian prison ministry volunteer training. “I washed feet, I learned how to interact with prisoners and guards,” he said. The experience, intended to help him understand the conversions he would witness, was especially interesting for an atheist filmmaker who grew up Jewish.

The director chose to film at Elayn Hunt because it’s “safer and quieter” than other prisons, he said. “It has a system of confidential informants that keep gang activities and drug-running down. It’s a good place to discover religion.” During production, he lived in a double-wide trailer in the prison’s parking lot.

After completing the first version of the film, Schwartz was curious about how prisoners who converted to evangelical Christianity while completing their sentences would be more able to avoid recidivism. During the time he spent revamping the film with Viso, Schwartz was able to follow up with the five ex-cons who had participated in the film. He added an epilogue reporting on how their religious practices affected their lives outside of prison.

The emotional high points of the documentary reside in the sequences filmed during religious revival weekends, when, as Schwartz said, “the guys feel like they’re being treated as humans.” They create posters, act in skits, eat decent food, listen to Bible stories and pray together.

The climax of the retreats arrives as each prisoner receives a letter written to him, by name, from Sunday-school children. “Boom — any chance of converting, that’s the trip point,” Schwartz said. “Many have kids on the outside they miss terribly. That’s the lever to get baptisms,” the ultimate goal of the evangelical work.

To Viso, the reworked documentary achieves what he and Schwartz set out to do together. “We wanted to make a film that was neither pro nor con prison ministries,” he said. “This provides balance and a sense of history.”

Even the narrator has historic ties to the issue. Actor Nick Chinlund’s father was a Presbyterian minister who pioneered prison ministries in New York, Schwartz said, “so Nick has an intellectual and emotional attachment to the subject matter.”

Viso is also proud of the film’s technical achievements. “We spent a great deal of time on color correction; it’s beautifully shot and cut well,” Viso said. “There’s great music. As a filmmaker and producer, I like it a lot. I saw that potential from the beginning.”

The hourlong film premieres in November on LPB and will be distributed by the National Educational Telecommunications Association starting in January 2015.