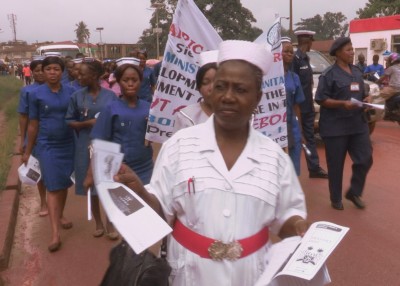 The Frontline documentary “Ebola Outbreak” is being used to train health professionals battling the epidemic in Africa.

The program, which aired Sept. 9, provides an on-the-ground look at the fight against the hemorrhagic fever in Sierra Leone. The virus has infected some 8,000 victims and killed half of those during this outbreak, which began eight months ago.

Representatives of the Joint Information Center on Ebola at the Centers for Disease Control and Prevention in Atlanta requested 200 DVDs, Frontline spokesperson Patrice Taddonio said.

“Its representatives in its Liberia command center were aware of the Frontline documentary and felt that the way we presented this information would be extremely useful in combating misinformation in rural areas in West Africa,” she said. The DVDs will be distributed in Liberia, Guinea and Sierra Leone.

“Ebola Outbreak” was co-funded by Unreported World, a documentary program on British public broadcaster Channel 4. Its version of the program ran on that network Sept. 26.

“We spent more than two weeks on the ground in Sierra Leone, and we were stunned by what we saw,” Frontline producer Wael Dabbous said in a press release. “This time — unlike in past Ebola outbreaks — the virus has spread so rapidly, to so many people, that traditional modes of containment can’t keep up. Local hospitals are overwhelmed and barely functioning because so many doctors and nurses have died.”

In the documentary, producers visit an emergency field hospital run by Doctors Without Borders and follow a medical investigator from Sierra Leone’s Ebola surveillance unit who goes into villages to isolate victims.

This is the second time this year that medical professionals have asked for copies of a Frontline documentary during a health emergency. The show also provided copies of “TB: Silent Killer,” which aired in March, to Doctors Without Borders. The international organization wanted the program for field workers in Swaziland and other countries fighting a drug-resistant strain of tuberculosis, Taddonio said.

Correction: An earlier version of this story mistakenly stated that the Ebola virus has claimed 8,000 victims, rather than 4,000.
ShareTweet EmailPrint More