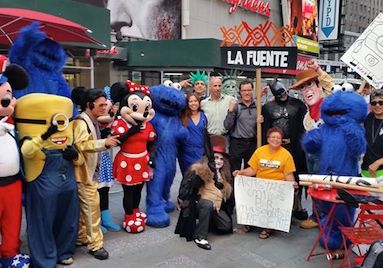 People in costume often pose for tips in Times Square, and at other sites nationwide frequented by tourists, with Elmo and Cookie Monster among the most popular characters. But incidents involving aggressive performers have brought increased attention to the practice.

In 2012, Dan Sandler, who has dressed as Elmo in New York and San Francisco, was caught on camera hurling anti-Semitic slurs in public while in costume. Sandler was later arrested for attempting to extort the Girl Scouts of the United States of America for $2 million and formerly operated a pornographic website in Cambodia.

In 2013, a performer dressed as Cookie Monster was arrested for shoving a toddler, allegedly after the child’s mother declined to tip for a photograph. And in July of this year, an individual dressed as Marvel’s Spider-Man was arrested for punching a police officer.

These incidents and others have prompted New York City Councilman Andy King to draft legislation aimed at regulating the behavior of “costumed individuals” in the city.

King hasn’t revealed details of the legislation, including whether the bill would address issues of copyright violation, but he plans to introduce the legislation this month. His office did not respond to a request for comment.

New York City Mayor Bill DeBlasio has also spoken in favor of regulating street performers, saying at a recent press conference that instances of harassment by performers have “gone too far.”

Sesame Workshop issued a statement to Reuters and other news outlets in July stating it “has not authorized the appearance of any Sesame Street costumed characters on public streets in any city.” The nonprofit also said it had met with “concerned” groups, including companies that hold copyrights for other characters commonly seen in Times Square, and that it was drafting plans to combat the unlicensed performers.

If Sesame Workshop decides to take action, street performers who have not noticeably altered their character’s appearances may have difficulty asserting fair-use claims in court, according to Amy Landers, director of the Intellectual Property Law Program at Drexel University School of Law.

“If you’re looking at imitation and you’re trying to earn money off it, the courts, generally speaking, do not find it fair use,” Landers said. Most Times Square performers aim to make tips by impersonating recognizable characters rather than parodying or commenting on them, an approach that fair use might cover. “If my child loves Elmo, of course they’re attracted to the fact that it’s Elmo,” Landers said.

But the proliferation of unauthorized use of the characters and the high costs of enforcing copyright will require a cost-benefit analysis for companies such as Sesame Workshop, Landers said. “It becomes very much a business decision whether the Sesame Streets of the world become concerned,” she said.

However, Georgetown Law professor Rebecca Tushnet said that Sesame Workshop could have difficulty asserting in court that the performers are infringing copyrights. It would have a weak case for trademark dilution — the idea that unauthorized Elmos and Cookie Monsters harm the nonprofit’s brand.

“It doesn’t make a lot of sense that you would think less of Sesame Street after a random guy wearing a bird costume harasses you,” she said, adding, “Just putting on clothes or a costume isn’t covered by copyright law.”

United for a smile

The threat of legal action has prompted a response from La Fuente, a group that advocates for immigrant workers. Most of the costumed characters are undocumented immigrants, according to the New York Times.

La Fuente has helped organize New York City Artists United for a Smile (NYCAUS), a group of non-unionized street performers. Formed in August, the group is drafting a set of rules and values for affiliated performers to follow.

The rules will include pointers on how to interact with tourists, and the group will discourage members from removing parts of their costumes in the vicinity of children.

Around 185 people have attended NYCAUS’s recent meetings, and “a large number” are immigrants who speak only Spanish, according to Lucia Gomez, Executive Director of La Fuente. La Fuente doesn’t inquire as to documentation status.

Members of the organization met with Councilman King Wednesday to discuss the lawmaker’s pending legislation. “It was enlightening for him to see that there is some similarity in [the] concerns of both the characters and those who want to regulate them,” Gomez told Current. Both sides are interested in maintaining civil order in public spaces and in preventing any proposed regulation on street performers from inquiring about immigration status, she said.

King told the group that he had talked to representatives from organizations including Disney to help shape the legislation, Gomez said.

Gomez sees the proposed attempts to regulate street performers as misguided. The performers make little money from the costumes, compared to entertainers who charge fees to appear as licensed characters at private parties, she said.

“People rent out costumes and perform and go to parties all the time. Is Sesame going after these individuals who are making big dollars?” she said. “If anything, Sesame should be paying [the street performers]. It just continues to promote their label.”

“If someone’s being a rude person, gosh, I wish I could regulate everyone in New York City for that,” she said.