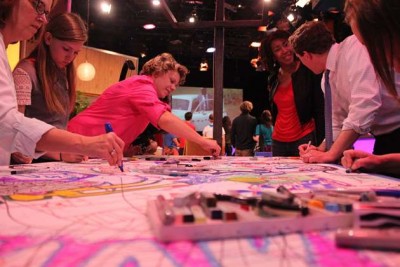 To attract young viewers, Twin Cities Public Television is experimenting with a new kind of show: the “TV party.”

That’s how Andi McDaniel, leader of TPT’s Rewire engagement initiative for under-40 viewers at the station in St. Paul, Minn., likes to describe her pet project, TV Takeover. Currently midway through its inaugural five-episode run, the series is a weekly grab bag of documentary, comedy and short-form video of all varieties, filmed live while guests mingle and drink around the cameras. Produced at TPT’s broadcast studio, each episode spotlights a Minnesota-based arts collective, interweaving pre-taped video content with live wraparound segments hosted by Adia Morris, and its broadcast is accompanied by a stream of live-tweets from viewers. The episodes are also live-streamed online at TVTakeover.net.

“It’s been a really long time since we’ve attempted something this complex,” McDaniel said. “It was a nine-ring circus.” The program, funded by a $75,000 grant from the National Endowment for the Arts and $50,000 from the Knight Foundation, is being produced on a budget of $200,000, the rest in the form of in-kind contributions — too small to cover the costs of a studio rehearsal prior to each live broadcast. “We couldn’t rehearse, so we went cold.”

McDaniel approached the organizations she wanted to feature on TV Takeover, including the artist community development group Springboard for the Arts and the public art nonprofit Northern Lights.mn, which participated in the first two episodes. Because each program involves collaborating with a different set of creators, the production process has varied wildly from week to week, McDaniel said.

TPT’s budget stipulations prevented the network from commissioning original content, so McDaniel selected organizations with sizeable catalogs of pre-produced content. But for some of the partners, McDaniel discovered later that much of their content was unsuitable for broadcast, either due to technical quality or a lack of thematic cohesion. In those cases, a TPT producer worked extra hours to produce additional content in collaboration with the arts groups.

For Friday’s episode, TPT partnered with MPLS.TV, an irreverent Internet video network focused on Minneapolis which McDaniel describes as “the perfect example of an entity that was created where there was a void in public television.” The content on MPLS.TV tends more risqué than standard local pubTV fare, such as a person-on-the-street series called “What the Fuck are you Wearing?”, which TV Takeover will air “with a lot of bleeps.”

McDaniel sees encouraging signs that TV Takeover is reaching its target audience. In addition to promising social media engagement and sponsorship from Minnesota Public Radio’s contemporary music station The Current, the party-themed show has brought viewers to TPT in another way. For the cost of a $10 ticket, which provides for food and drink, members of the studio audiences participate in each broadcast.

McDaniel recruits her audience through a combination of posters around town, local media ads, underwriting on The Current, and social media pushes. For the first two episodes, the audiences have been composed of “150-plus people each time, and they’re almost all under the age of 40,” she said.

TPT is pursuing funding for a second season of TV Takeover.