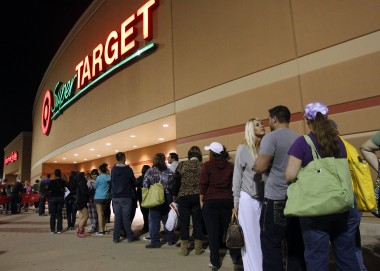 Customers lined up for Black Friday shopping sprees at Target last November. After hackers breached the retailer’s system protecting customers’ credit-card information during the 2013 holiday shopping season, pubcasters across the country have struggled to recover lost donations from sustaining members.

Public broadcasters continue to count their losses from last year’s massive consumer data hack of the retail giant Target as they scramble to reclaim donors and better prepare themselves for the next time a security breach affects their member revenues.

Many television and radio stations were caught in the Target mess — which exposed the credit-card and personal data of 40 million of the store’s customers — because of their growing reliance on the contributions of sustainers, donors who make monthly gifts drawn automatically from credit cards or bank accounts.

With millions of credit cards canceled or changed, stations around the country together likely lost tens of thousands — if not hundreds of thousands — of dollars in the months following the breach; the total is impossible to calculate since some of credit-card rejections weren’t tied to Target. While losses have slowed, many continue to bleed revenue as they work to recapture new account information from donors whose credit cards had gone bad.

“Target has been a mixed blessing,” says Melanie Coulson at Greater Public, a development and marketing organization for public media. “It’s been a big challenge, but it has also moved security issues and best practices for sustainer programs up the priority list.”

Among other responses, station-based fundraising staff are learning to monitor their donor files more closely to learn how and when gifts are lapsing so they can move more quickly to request updated card information. And they are building online forms to allow donors to more easily make updates themselves. Many stations are also asking donors to switch from credit-card transactions to electronic funds transfers — automatic deductions from checking accounts.

EFTs are generally clunkier to establish than credit-card draws, but fundraising organizations say they are more stable for monthly donations. Unlike credit cards, checking accounts don’t have expiration dates and are considered more secure.

Charities have offered different forms of sustainer programs for decades, but pubcasters began cultivating smaller monthly gifts from their members only within the last handful of years. The programs, which are more established in public radio than television, offer stations a steady stream of revenue throughout the year and boast a high retention rate of donors year after year, in part because — unlike installment-plan gifts — they have no expiration date.

But the Achilles’ heel of sustainer programs remains the vulnerability of credit cards: They expire, they hit credit limits, they get reissued by banks without warning and they get hacked. Stations report that anywhere from 1 percent to 5 percent of sustainers’ credit cards are declined each month. Those rates as much as tripled, even quadrupled, following the Target breach.

Valerie Arganbright, a Minnesota fundraising consultant, says that stations should have an ongoing stop-loss program — a system of emails, letters, phone calls and other communications with donors — to ensure they update their credit card data in a timely manner.

“Target has been a good test of stop-loss,” Arganbright says. “Now everybody knows that reactivating donors is a daily business that takes a devotion of time and resources.”

Stop-loss is a bigger challenge among nonprofits, she and other fundraising experts say, than for businesses. For services like the movie-streaming company Netflix, for example, a lapsed payment means no movie. Missing a monthly donation, on the other hand, may be more easily overlooked.

“We have to create our own urgency,” says David Preston, director of membership at Twin Cities Public Television, in St. Paul, Minn.

That wasn’t hard to do following the Target breach, he says, which led to credit-card cancellations by the hundreds among sustaining members, draining as much as $17,000 a month from TPT’s revenue.

The station brought in additional staff during the day to call members, and hired an outside telemarketing company to make calls in the evenings and on weekends. The telemarketer also set up a 24-hour hotline dedicated to card issues. By the end of March, it had reeled in 3,200 lapsed donors.

Now the station is working on other improvements, such as changes to its website to allow donors to log in and update their own financial information directly.

MPR, also in St. Paul, has one of pubcasting’s biggest sustainer programs — with nearly 89,000 donors contributing more than $11 million annually, according to Bob Breck, director of membership. Its management is considering another fix to help in the future: hiring a vendor that uses data to automatically recapture new credit-card numbers. In a recent trial, one vendor working from a list of declined credit cards succeeded in recapturing 30 percent of them. The Target breach had hit MPR hard, with as many as 11 percent of its sustainers’ cards declined in both February and March, Breck says. The rate is now down to 5 percent.

“It costs money to do all this,” says TPT’s Preston, “but you have to understand your file and know what you’re losing if you let sustainers go. It doesn’t make sense to say you can’t afford a mailing or whatever you need to communicate with sustainers to get them back because these are loyal donors who stay around for years and years.”

Chicago’s WBEZ turned to This American Life’s Ira Glass to help communicate with its lapsed donors.

At Chicago Public Media’s WBEZ, Shepherd worked with Ira Glass of This American Life to create spots calling on members to update their credit card information.

By January, post-Target credit-card rejections were siphoning about 1,200 sustainers a month from the station. Since then, it has recouped more than one-third of the lapsed sustainers every 60 days. To bolster the response, the station began airing three radio spots in which Glass encourages listeners to update their credit-card information with the station. In one spot, Glass admits that his own sustaining gift had recently lapsed before he realized it because of a credit-card issue.

“We are hoping that people will stop and listen to Ira,” says Jill Shepherd, WBEZ’s director of individual giving. “You can send a lot of emails and make a lot of calls, but you might have to be creative to cut through the clutter.”

WTMD in Towson, Md., resorted to a desperate plea to get donors’ attention. After the Target breach, the credit cards of nearly a quarter of the radio station’s 1,500 sustaining donors were being declined, costing more than $4,000 a month in lost revenue. A March email went to its lapsed donors with “WTMD is in a CRISIS” in the subject line. The email laid out WTMD’s financial losses and asked donors to re-sign up on its website within three days. About 120 did so.

Maryland Public Television reached out to its donors with a softer touch. In phone calls and emails, it offered an incentive to the 350 or so sustainers whose cards were affected by the Target breach. Lapsed sustainers received a free yearlong membership if they updated their credit-card information or set up an EFT. All but a couple dozen re-upped their giving, with six donors taking advantage of the free offer.

“Dealing with all this financial information takes a lot of trust and we wanted to demonstrate that we deserve their trust,” says Rick Lore, MPT’s v.p. for development.

Fundraisers at KDHX, in St. Louis, took a similar approach in the wake of the Target breach. The station had already been through a comparable ordeal in early 2013 after hackers breached a regional supermarket chain’s payment system, compromising 2.4 million credit cards. At that time, KDHX, which typically had about 50 credit cards in its sustainer program declined each month, started losing as many as 900 donations per month. It didn’t suffer nearly as much damage to its monthly gift receipts after Target, but it had learned at least one important lesson: “Turn adversity into opportunity,” says Beverly Hacker, KDHX’s executive director.

“If you are calling donors to update card information,” she says in an email, “use it as an opportunity to talk to and to listen to your donor, and find out what they value about your station or any concerns they have.”

Debra Blum is a Philadelphia-based freelance writer specializing in coverage of the nonprofit world.