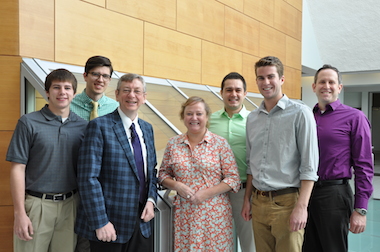 University of Missouri sophomore Jack Howard discovered public media by accident, brushing his teeth and scanning pop and rap stations in his hometown of Chicago when he stumbled across an episode of Radiolab on WBEZ.

“I heard these funny noises,” Howard said, recalling the Radiolab episode about whales that he came upon. He stopped spinning the dial and was hooked.

Howard’s chance encounter with pubradio led to his joining a producing workshop at WBEZ’s Vocalo, pursuing a major in convergence journalism at U of M’s journalism school and working as a producer at KBIA in Columbia, Mo. Now his ideas for helping pubmedia are getting in front of station executives and technologists in the system.

On April 22, an app conceived by Howard and designed by an interdisciplinary team of students won an annual competition for student developers held by the university’s Reynolds Journalism Institute and sponsored by the Public Media Platform. This was the seventh year for RJI’s competition, which brings together teams to develop apps, widgets and other digital-media innovations. It was the first year the competition focused on public media.

My2Cents Radio creates customized playlists of popular public radio programs on Android mobile devices, with a donation system for listeners to give sums of as little as two cents directly to content producers. As the competition’s winners, the My2Cents Radio team will fly to San Francisco May 31 to participate in a social journalism hackathon hosted by KBIA and San Francisco’s KQED and sponsored by RJI and the PMP. The developers hope to continue work on the app and release it publicly.

Howard sees My2Cents Radio as a way to help public media reach younger audiences. “Young people shouldn’t have to experience public radio just by mere chance like I did,” he said. Though public radio’s content can appeal to younger listeners, the system lacks sufficient outreach to reach their ears and wallets, Howard said.

“I’m pursuing a career in public media because I want to share my love of funny noises and odd stories,” Howard said.

“I think there’s a lot of great public media content that would appeal, and does, to a young audience that’s aware of it,” said Mike McKean, director of RJI’s Futures Lab and a professor of convergence journalism at the J-school. “But you’ve got a lot of younger people who are not typically listening to a public radio station or watching public TV. They certainly are not the primary donor base for either radio or television. So we were looking for ways to surface that content in a natural way, using technologies that younger people are used to using, involving recommendation processes so that we could customize content for them.”

McKean’s journalism students are aware of opportunities in public media, he said, but the system must try new approaches to reach more young listeners.

“I do think we have to use technologies and approaches that are more appealing, or more natural or normal, to that age group,” said McKean, who has also worked as KBIA’s news director. “They’re not likely to listen to a terrestrial radio or satellite radio and wait to hear whatever. . . . They’re more interested in having very specific content served to them or being able to discover through their friends or other people they trust.”

My2Cents Radio is similar to the mobile streaming app under development at NPR but with more emphasis on soliciting financial support from users. Unlike NPR’s app, which will direct donors to a separate web page where donations will be funneled through NPR, My2Cents Radio encourages listeners to give directly to programs via the app’s own system for taking in contributions.

Joining Howard on the My2Cents Radio team are senior Georgi Angelov, who studies computer science; junior Connor Hickox, a communications student; and sophomore Gabriel Riekhof, a business major. All were unfamiliar with public media before starting the project. “I had to first convince my team members that this was cool content,” Howard said.

The partnership between the journalism institute and the PMP developed when McKean got in touch with PMP Executive Director Kristin Calhoun. Calhoun hopes to use the PMP to strengthen technology supporting public media, and working with students to expand the platform’s potential made sense for both organizations. “It took about a minute” for the two to decide to team up, McKean said.

RJI announced the competition in November 2013 and organized “speed dating” sessions with about 40 students to encourage partnerships across majors. The field was narrowed to two finalists, My2Cents Radio and another app. From January to April, the groups created working prototypes and met for mentoring sessions with pubmedia professionals and other execs including Calhoun, McKean and PRX Technical Director Andrew Kuklewicz.

Soliciting donations for content producers rather than stations or distributors turned out to be the most provocative aspect of My2Cents Radio. In mentorship meetings, station managers warned the team that the concept could cannibalize the system’s donor pool. After a few weeks of deliberating, “they came back saying, ‘We believe that cannibalization is already occurring within the digital space, so it’s just a matter of time, and you can either be in it or you can be out of it,’” Calhoun said.

That feature may have alarmed station execs but helped give the app an edge in the competition, according to McKean and Calhoun. The app enables donations via Google Play purchases while a listener streams a program, and no gift is too small.

“I thought it was a perfect challenge to try to get people to give just enough to overcome that ‘penny gap,’” said Howard, referring to venture capitalist Josh Kopelman’s theory that the difference between a free service and one that costs a penny poses the biggest psychological gap for consumers to overcome.

The runner-up app in the contest, ShortCut, aggregates business-related pubmedia content from sources including APM’s Marketplace and PBS NewsHour to match a user’s commute.

Calhoun will take the student prototypes to the PBS Annual Meeting May 12-15 in San Francisco and plans to host a webinar about them to show off “what twenty-some-year-olds would do with public media content.”

“I wasn’t out looking for student competitions, but now I will be,” Calhoun said. “Now I’d love to see what other kinds of schools or other kinds of universities might be interested.”