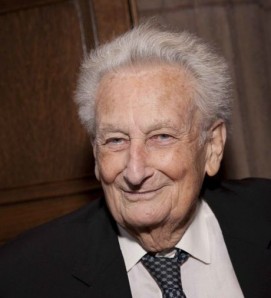 Capretz, a French native who moved to the U.S. in 1949, developed the educational foundation for French in Action while teaching at Yale, where he incorporated audio and visual materials into his classes. In 1985, the Annenberg/CPB Project, a learning-media funder formed by CPB and the University of Pennsylvania’s Annenberg School of Communications, funded production of the dramatic, soap-opera–style TV series.

The show followed the romance between an American student studying abroad in Paris and his French love interest. It was filmed in France with native French speakers, including no English.

“At first that kind of surprised a lot of people: how can someone who only speaks English learn French that way?” said Lynn Marie Smith, a senior project officer at the Annenberg/CPB Project and Capretz’s chief contact for the series. “But it started to work.”

Each episode introduced a concept of the French language through dialogue between characters, reinforced by repetition and written classroom assignments. The series of 52 half-hour episodes aired on public TV stations nationwide and was used in French curricula at thousands of colleges.

But the show also provoked debate over its depiction of men and women. Three female students at Yale filed a sexual-harassment grievance with university officials in 1990 over the curriculum, arguing that the program taught phrases to help men pick up women. In addition, the students said the series’ male point of view objectified the body of its female actor.

“I think it caught everybody off guard,” Smith said of the accusations. “I’m as feminist as anyone. I saw it as comedy.”

At the time, Capretz told the New York Times he “wouldn’t change any of it,” but Yale’s French department committee thought differently and ruled that the course material should be changed. The material remained the same, however, after French teachers came to Capretz’s aid. Educators defended the film and its contents and continued to use the curriculum, according to Michele McLeod, senior program officer for content and communications at Annenberg Learner, the successor to the Annenberg/CPB Project.

Capretz, who was also the director of the Yale Language Laboratory, retired from teaching in 2003. He and French in Action’s cast attended a 25th-anniversary reunion of the show at Yale in 2010.

One thought on “Pierre Capretz, French in Action creator, dies at 89”