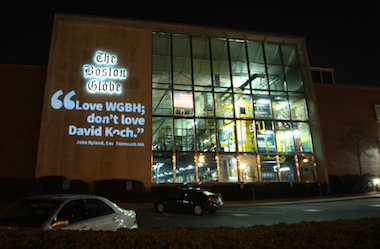 An ongoing political campaign to force a split between WGBH and its most controversial board member took on new visibility in March, when electronic messages calling for billionaire David Koch’s ouster from the WGBH board lit up Boston landmarks, including Fenway Park and the station’s own headquarters.

The California-based progressive organization Forecast the Facts continues to press for Koch’s resignation from the 30-member WGBH Board of Trustees. The campaign, initiated last fall and aimed at the Boston pubcaster’s supporters and employees, alleges that the conservative philanthropist’s ongoing support for organizations involved in climate-change denial should disqualify him for a board seat.

Daily Kos, a blog promoting Democratic political candidates and policies, and the Courage Campaign, a website supporting a wide range of progressive causes, have helped gather more than 235,000 digital signatures on petitions to oust Koch from the board.

Koch, ranked among the world’s wealthiest billionaires by Forbes magazine, has supported WGBH financially for more than three decades. Koch Industries, the Kansas-based private company that he co-owns and runs with his brother Charles, holds substantial interests in chemical refining and energy. His wide-ranging contributions to conservative causes, including organizations that dispute evidence of climate change, have made him a popular target of progressive activists.

According to Greenpeace, the businessman has provided more than $67 million to groups that dispute evidence of climate change.

“PBS and WGBH are beloved and trusted institutions, representing the best of American media,” said Daniel Kessler, Forecast the Facts spokesperson. “Someone who actively funds misinformation is an odd choice for the station’s board of trustees.” He described Koch as the “arch-villain of climate-change deniers.”

But to WGBH, Koch is a generous donor who brings ideological diversity to its governance. Koch began providing financial support to the Boston pubcaster in 1982 and joined its board of trustees in 1997. To date, he has donated $18.6 million to the station, which is PBS’s top producer. More than half of his largesse, $10 million, has been directed to Nova, the WGBH-produced science series, according to Melissa Cohlmia, communications director for Koch Industries.

The protests directed at WGBH haven’t altered the philanthropist’s commitment to the station. “David Koch has no intention to resign from the board of WGBH,” Cohlmia wrote in an email.

Nor has WGBH’s leadership been swayed. “Just as our viewers and listeners reflect a full spectrum of pursuits and viewpoints, so do our board members,” said Jeanne Hopkins, spokesperson.

Hopkins noted that WGBH has presented “the science and facts about climate change” through documentaries on Nova and Frontline, “and we will continue to cover the full dimensions of this topic.”

Objections to David Koch’s involvement in public television and his hefty financial contributions to Nova have percolated for nearly four years, judging by complaints directed to PBS Ombudsman Michael Getler.

Criticism of Koch’s support for Nova erupted among progressive bloggers after an August 2010 rebroadcast of Becoming Human, a three-part series exploring how ancient climate change may have actually helped humankind develop. Getler’s initial response to complaints about the broadcast drew a sharp rebuke from Joseph Romm, founder of the Climate Progress blog, unleashing a flood of email to the PBS ombudsman.

Getler has since handled complaints about Koch’s financial support for PBS programs in multiple columns, acknowledging that viewers could reasonably perceive that the funding has influenced programming, though Getler has found no evidence that it has.

Last year, left-wing advocates began escalating their attacks after Koch resigned from the board of New York’s WNET, reportedly over its handling of the PBS-distributed independent film “Park Avenue: Money, Power and the American Dream,” which featured an unflattering portrayal of him.

Forecast the Facts took up its campaign to oust Koch from the WGBH board six months later. In addition to circulating online petitions, the campaign has mounted protests outside the station’s headquarters and placed advertisements on bus stops and a large billboard outside the station.

“We are not alleging that David Koch is influencing programming decisions,” Kessler said. “We’re saying that we feel it is improper that Koch is affiliated with WGBH.”

Forecast the Facts launched in 2012 with the purpose of discrediting television meteorologists who deny climate change. It has trained its sights on numerous media outlets since then.

In addition to its WGBH campaign, it is pressuring the Washington Post to drop the syndicated columns penned by George Will, the conservative pundit who challenges climate-change science.

Another campaign targets Google, urging an end to its financial support for the conservative American Legislative Exchange Council, which opposes renewable energy standards. And in 2012, Forecast stirred up an online protest of a PBS NewsHour segment that included meteorologist Anthony Watts, whom it described as “a virulent climate change denier.”

In its latest volley aimed at WGBH, Forecast protestors projected anti-Koch messages such as “Love WGBH; don’t love David Koch” onto the Boston Globe building, Fenway Park and the Massachusetts Statehouse the evening of March 27. The next day, as the station hosted a forum on climate change, protestors shone similar messages on the WGBH building.

Some of the audience members who attended the event expressed support for the cause by wearing “Koch-Free WGBH” T-shirts, according to Kessler. He estimated that 40 of some 200 audience members sported the shirts.

Kessler said he’s encouraged by “an escalation in enthusiasm” for the campaign. Increased media coverage, membership engagement and financial contributions provide evidence of its growing impact, he said. “This is one of our better-performing campaigns.” The cause has sparked around $20,000 in donations to Forecast the Facts so far.

The Courage Campaign, a Los Angeles–based nonprofit that uses the Web to organize on behalf of progressive causes in California and beyond, raised nearly $16,000 around last month’s events. Its website specifically solicited donations for the Koch-targeted “Illumination” campaign, urging supporters to “‘shine a light’ on WGBH’s hypocrisy for all to see.”

The anti-Koch campaign targeting WGBH has been bolstered by an alliance of California-based left-wing groups promoting political action on climate change. Forecast the Facts operates under the umbrella of the Citizens Engagement Laboratory, which specializes in using technology and building collaborations to advance a wide range of liberal causes. Forecast the Facts is part of a special initiative, the CEL Climate Lab.

Forecast the Facts is backed by contributions from about 115,000 members worldwide, as well as like-minded organizations, Kessler said.

The 11th Hour Project, a program of the Schmidt Family Foundation of Boca Raton, Fla., is one such funder; it supports public education on the impact of human activity on water, energy and food resources. Another funder is the VKRF Foundation in New York, which believes that “human creativity and collaboration” are key to solving environmental challenges. Its grantees include 350.org, founded by author Bill McKibben, whose 1989 book The End of Nature was one of the first to identify climate change as a growing problem.