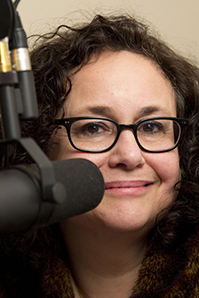 Transom is launching a new video series in a push to create more public radio fans.

The online resource for audio producers premiered “This is Radio” Monday, a series of short documentaries about stars of the medium and their craft. The show launches with episodes about 99% Invisible creator Roman Mars and On the Media Managing Editor and co-host Brooke Gladstone. Five additional episodes will be released biweekly.

Andrew Norton, a Transom Story Workshop graduate and multimedia producer for Greenpeace Canada, directs the series. “These are all people that I’m fans of, and I listen to their work,” said Norton, a Toronto resident who listens to his favorite programs exclusively as podcasts. Norton said he was particularly interested in “seeing how [a producer’s] worldview changes how they make radio, or vice versa, and seeing how their personality reflects what they do.”

Part of the goal of the series is to introduce quality audio content to online audiences who may only have the patience for video, said Transom founder Jay Allison.

“I think sometimes there just is a greater number of people willing to click on something to look at,” he said. “The eye is tyrannical. We just want to look at stuff. But listening’s more important.” He added that Transom will consider future video projects “as long as they have spoken story at their heart.”

Though the series focuses on the unique power of radio storytelling, Norton sees audio stories as lending themselves well to video. “When you make radio, all you have is the story,” he said. “If you can make a cool radio story, you can definitely transform that into video, because you can use all these other [visual] things to get attention.”

The series is supported in part by a grant from the National Endowment for the Arts. Transom will also seek underwriting and additional financial support for the series.