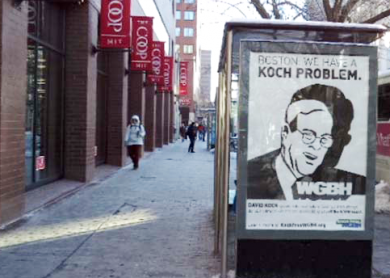 Three progressive groups have organized a protest Friday night at Boston’s WGBH as they continue to pressure the station to drop conservative activist billionaire David Koch from its board.

The gathering at WGBH coincides with the station’s Smart Conversations series on climate change. The progressive organizations — Forecast the Facts, Daily Kos and the Courage Campaign — take issue with Koch because they say the philanthropist funds organizations that “miseducate the public” about climate change.

The campaign, which kicked off last October, has included advertisements at four bus stops in the Boston area, a large billboard outside the station and about 50 activists appearing outside a board meeting.

In addition to the protest at WGBH Friday, huge electronic projections will light up the exterior of the station’s studios. Similar projections will illuminate Fenway Park, the Massachusetts Statehouse and the Boston Globe‘s headquarters Thursday night. The projections will feature messages targeting WGBH’s board.

Forecast the Facts, Daily Kos and the Courage Campaign have also gathered more than 235,000 signatures on digital petitions opposing Koch’s involvement with WGBH.

Koch “is the arch-villain of climate-change deniers,” Forecast the Facts spokesperson Daniel Kessler told Current. Since 1997, the billionaire has provided more than $67 million of funding to groups that insist climate change does not exist, Kessler said.

The station supports Koch’s involvement on the board. “Just as our viewers and listeners reflect a full spectrum of pursuits and viewpoints, so do our board members,” WGBH spokesperson Jeanne Hopkins told Current. She added that WGBH has presented “the science and facts about climate change” through documentaries on Nova and Frontline, “and we will continue to cover the full dimensions of this topic.”

Kessler disagreed. “PBS and WGBH are beloved and trusted institutions, representing the best of American media,” he said. “Someone who actively funds misinformation is an odd choice for the station’s board trustees.”

Koch has served on the board since 1997, said Melissa Cohlmia, head of communications for the Wichita, Kan.–based Koch Industries. He’s also donated $18.6 million to WGBH since 1982, $10 million of which has gone to Nova.

Cohlmia said Koch has not commented on the protest campaign. “We are not exactly sure what Forecast the Facts’ allegations are,” she wrote in an email. “David Koch has never tried to influence WGBH or Nova programming.”

“David Koch has no intention to resign from the board of WGBH,” Cohlmia told Current.