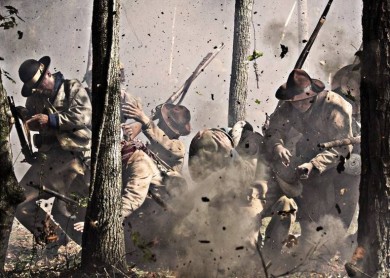 “Ken Burns did such a great job — why would I even put myself in a position where we’re even trying to do that?” Wheeler said.

Civil War: The Untold Story features hundreds of re-enactors portraying the action in the decisive Western Campaign, which played out between the Appalachians and the Mississippi River. (Photo: Great Divide Pictures)

Instead, production of Civil War: The Untold Story grew organically from footage of Wheeler’s films for national park visitors centers.

These battlefields and others in states then considered the American West had long been overshadowed by those further east, such as Gettysburg, the focus of Burns’s latest PBS film.

As Wheeler’s team researched and produced films on the Tennessee and Georgia battles,  “we started connecting the dots of this campaign, and started to understand the big picture of how critical it was to determining the final outcome of the war,” Wheeler said.

While historians tend to focus on action in the Eastern Theater, with its famous generals Robert E. Lee and Stonewall Jackson, several key defeats for Confederates in the Western Theater marked a true turning point in the overall war.

Elizabeth McGovern, the American actress known to many Masterpiece viewers as the well-heeled Lady Cora of the hit Brit drama Downton Abbey, narrates the often bloody tale. “This is such a testosterone-driven story, with battles and male historians,” Wheeler said. “There’s something comforting about Elizabeth telling it that makes it more palatable.”

The series features professionally produced battle re-creations that deployed hundreds of Civil War re-enactors and used special effects, makeup and historically accurate costumes. “The films look like a motion picture but sound like a traditional documentary — so they’re sort of a hybrid,” Wheeler said. The re-enactors “provide a level of expertise that we couldn’t bring,” he added. “Everything from wardrobe to how to march, the props, the proper way of firing the weapons and how to form a battle line.”

Wheeler is also proud that the film reflects perspectives of African-Americans involved in the war.

While working on the Kennesaw Mountain film, he learned that few   African-Americans visited the battlefield. “That inspired us to tell the story in a way that does make them part of the story.” Wheeler wove the experiences of various African-American characters through all five hours, including an emancipated woman from Tennessee who becomes a battlefield nurse, dies in battle and is buried in Georgia with the soldiers she cared for.

The series release coincides with the 150th anniversary of the Atlanta Campaign, which culminated with the fall of the southern city during the summer of 1864. The hourlong episodes are presented by WNPT in Nashville and distributed by American Public Television.